You guys might remember my sa-weet garage sale find from a few weeks ago.  A $15 buffet that I wanted to paint teal, turn in to a TV cabinet, and love forever.

Then, one of you dear readers, ruined my teal dreams for me.

Yeah Lauren, I’m looking at you.  You and your mom.  Right in the eyes.

You saved me from making an expensive mistake, but I still long for some teal furniture.  Lauren and her mom figured out that my cabinet was actually a pretty expensive piece of furniture fetching about $1,000 on ebay.  We did find the Broyhil company “stamp” on the back upon further inspection, so we have left it unscathed.

Room One
This was our TV stand before. 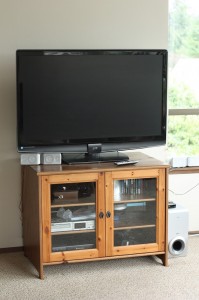 It was fine; nothing wrong with it.  There was little decent storage, but it absolutely worked.  I ended up selling it to our neighbor for $20 and they couldn’t be happier about it.

Room Two
This was Jack’s tiny bookshelf in his room.  Homeboy is such a reader, that he outgrew this thing while still a fetus.  About 75% of his books lived downstairs on our old IKEA bookshelves.

Room Three
The basement, where most of Jack’s toys and books live.  This part of the room is not something we use every single day, so honestly it was a bit of a trash heap. 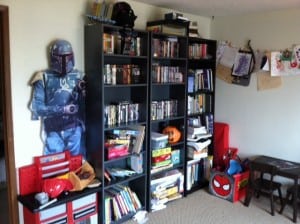 Step One
Remove everything from the old TV stand, dust, vacuum, and set up the buffet.  The buffet had been kinda ignored for years, and the wood was pretty dry and kinda scuffed in places.  I filled a small bowl with olive oil and a few drops of grapefruit essential oil, and massaged the mixture in to the wood with an old rag.

*Updated to add the grapefruit oil is just for scent.  You can use plain ole’ olive oil with no problem!

While doing this, Troy said “do you know what you’re doing?  Did you read that on the internet or something”?  To which I responded, “yeah I found it on a website called how to ruin your $1,000 piece of furniture”, gave him a “did those words really just come out of your sandwich hole” look and went back to oiling up my buffet. 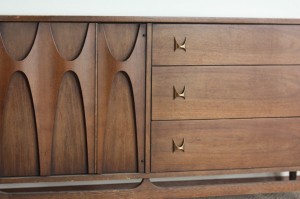 Here is a spot on the top before: 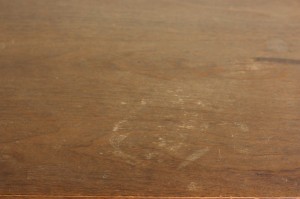 And after a nice little oil massage: 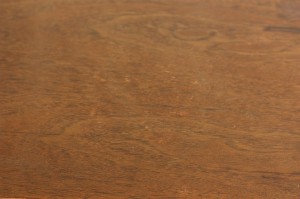 Here is a side by side shot of one of the drawers in front.  The left half had been oiled and the right side hadn’t gotten the treatment yet. 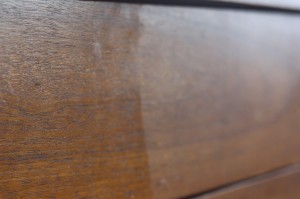 We then moved all the DVDs from downstairs in to the buffet drawers. 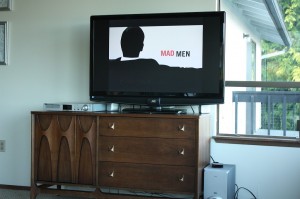 I originally bought this piece of furniture because I said it looked like it was straight off of the set of Mad Men.  Troy asked if I thought owning meant Jon Hamm would come over and make out with me, and I told him that girl can dream.

Jon Hamm would have not asked me if oiling up the buffet was a “thing or not”.  Jon Hamm get’s it. I’m just saying.

Step Two
Bring one of the bookshelves from downstairs, up in to Jack’s room.  All the books came up too, and thankfully now all of Jack’s books are in ONE place.  The only downside to this is that now I no longer have a place to hide the books I am so sick of reading. 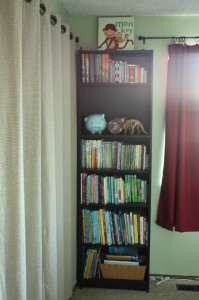 Step Three
Reorganize the stuff left on the shelving downstairs.

Boba Fett is available for home protection.  For a price.

And for the bonus, Jack’s old bookshelf has been made in to a shoe shelf in the basement inside of the garage door.  No, folks, that is not beat up wood paneling.  That is beat up real wood!  Jealous? 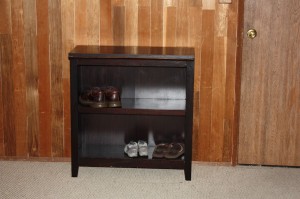 Troy has been asking for a shoe shelf for months.  I’ve resisted since we had a shoe mat there, and homeboy can’t even put his shoes ON it.  As in, he need only slip his shoes off over the mat.  Can’t do it.  Gun to his head, the shoes end up on the carpet NEXT to the mat.  We’ll see how successful the shoe shelf actually is…

Overall, we ignored Jack for about five hours, but we finally got our big projects done.  $15, three rooms, big changes all around.  We’re happy, Jack is happy now that we are paying attention to him again, and most importantly, the buffet didn’t get painted teal.

:shakes fist at Lauren and her mom: