IKEA has made billions by coming up with smart storage solutions that are bright, fun, and practical.  Don’t even get me started on my true love, The Container Store.  Goodness gracious, just walking in there gives me hope for a better tomorrow.

We had a problem (a first world problem) in our living room with DVD, magazine, and baby toy storage.  But after quitting my job, and then immediately having a very expensive two weeks that nearly drained our emergency fund, IKEA and The Container Store are merely enjoyable window shopping. Our saving grace came in the form of a $2.99 CD binder from Goodwill.

Step One: Kiddo DVDs
We had all of Jack’s movies stored in to the top two drawers of this little dresser that we pulled from my in-law’s basement a few years ago. You’d have to take them all out when he was choosing what to watch for movie night, and it was so crammed that often a DVD case would get stuck in one of the drawers and jam the drawer below it.  Plus, two entire drawers in a small four drawer dresser was a lot of valuable real estate. 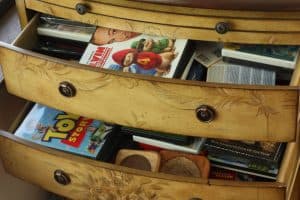 At my urging, Troy picked up a CD binder at Goodwill.  As with all items that come in to this house from thrift stores, it sat outside for almost a month because the “Goodwill smell” bothers me to no end.  Anything I can’t wash in the washing machine or dishwasher is banished to the deck or garage until I can no longer smell it.

All the kid DVDs were moved to the binder, and the empty DVD cases were set aside for our “free” pile for our upcoming garage sale.  In about 10 minutes, I freed up 1.5 of the drawers. 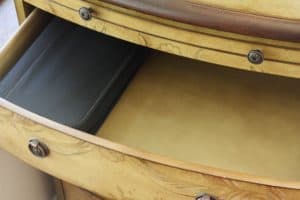 Step Two: Ottoman Recovery
We have this storage ottoman that used to contain just magazines.  Between my sister’s subscriptions and mine (we swap as soon as we’re done reading), I used to read two magazines cover to cover every movie night.  With Bennett’s arrival, that has gone by the wayside, and I am lucky if I get a chance to read one entire magazine in a month.  The magazines were stacking up, and the ottoman was getting exceedingly heavy.  We move it around the living room depending on who wants to prop their feet up, and also use it as seating when we have more people than couch space. 40 pounds of magazines were not easy to scoot around at will. 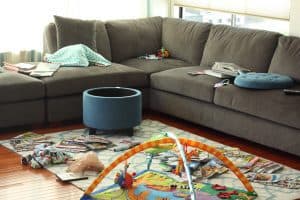 The middle of the great clean out. Some times you have to crack a lot of eggs to make a sweet omelette

I took out all the magazines I had finished and forgotten to give my sister (whoops), those that I had started but never finished, and those that I clearly will never read.  The ones for my sis were put in one pile, the ones I will never read were put aside for our garage sale, and the magazines I started but never finished were put on top of the pile for priority reading. The ones I saved were moved to the now empty drawer in the dresser. 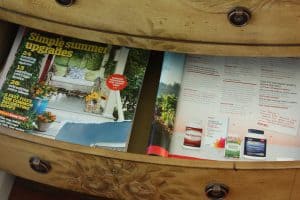 Step Three: Baby toy storage
I am officially that person who does not like kid gear around.  When Jack was little, his bedroom in our former apartment was TINY, so most of his bigger toys were stored in the living room.  It made me itch.  Bennett’s room is bigger and with much better storage, and I have great bins for organizing things.  Not to mention, with the second kid you realize how little junk you actually need.  Save yourself the cash, and just give them the laundry basket.

That being said, it was getting annoying bringing the same books and small toys back and forth from his room to the living room.  So I started storing them in the ottoman on top of all my magazines.  As you can imagine, it was awesome to dig through back issues of Mother Earth News to grab Sophie (that giraffe lasted seven years!). 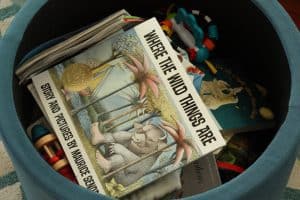 With the ottoman cleared of magazines, it became storage central for Bennett’s favorite books and well-loved toys.  I stole a small IKEA drawer organizer (oh that store.  It gets me) from Jack’s room, and placed it in the ottoman for small teethers (made in the USA!!!) and other items. 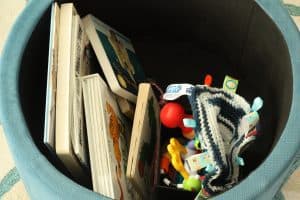 As much as I love gorgeous and fun storage design stores, it is nice to have to stretch my frugal decorating brain every now and then. What has been your favorite hack for organizing?