First Time Visiting? Start Here!
Home » Uncategorized » It’s 1:29 am. Do You Know Where Your Health is?

My sister and I have realized that August is a month that is not friendly to our family.  For the last four years in a row, one or both of our parents have had serious medical issues in August.

It is a family trait to be consistent, and this month we did not disappoint.  Hence the radio silence around these parts.  We’ve already decided to skip August of next year.  The whole month just isn’t allowed to happen.

It all started with a fever my dad had a few weeks ago, when Troy and I were at the ocean with some friends.  Thankfully, my sis (a teacher) was around and able to help out in my absence. From there it continued on to my dad having horrible shoulder pain in a shoulder that is already due for a replacement.  And then my mom followed suit with feeling poorly at the end of last week.

I thankfully have an understanding boss, and oodles of sick leave, and was able to stay home and help out with both of them.  My dad’s shoulder continued to get worse, and we were all looking forward to his 3 pm appointment on Monday to receive a cortisone injection to end the pain.  And the whining.  Ahem.

He went in on Monday, and was told by the doctor that his shoulder was so inflamed that a cortisone shot wouldn’t fix anything.  The doc was concerned about the inflammation and ended up draining the shoulder (here is where I puke when my dad tells the story) and sending the gunk (barf) off for testing.

I had to work late on Tuesday, and I came home to just Troy, Jack, and my mom.  My dad was apparently on his way to urgent care at the insistence of his doctor who had called that afternoon to say that the fluid they removed contained evidence of sepsis in his shoulder.  Seemed like that warranted an ER visit to me, but for some reason their health insurance company has a total hard on for urgent cares.

The urgent care visit turned in to an immediate admission in to the hospital that very evening.  I spent the night downstairs with my mom, and was woken up by my dad calling very late to say he was headed in to surgery because they had to remove all the infection.  In my sleepy (I was straight up drooling) state, I simply said “ok, good luck, we love you and keep us posted”.

After hanging up, I had the “oh hell” moment of realizing I didn’t know which hospital he was at, or any contact information.

I tracked him down the next morning, and the surgery went well and he is feeling a bit better. He’ll be in the hospital until they can identify what kind of infection it was, so that they may treat it appropriately before release.

This August, and all the previous ones have taught me some very important lessons:

1) Forcing my parents to move in with us, was hands down, the best bossy moment I’ve ever had.  I’m not sure how the circus of schedule juggling that is going on now would be successful if they were still an hour round trip from us.

2) I will forever be grateful for my sister.  Some family dynamics are weird and I get that not everyone has siblings that are let’s say “value added”.  When God decided to give both of my parents the short straw in life with health, he also decided that two super cooperative girls who get along (now.  Because when we were younger it was like two vipers in a paper bag) and lean on each other was his “whoops, my bad” consolation prize for their health.

We are also blessed with a supportive extended family, and my parents have a great caregiver who comes to the home, and is willing to pick up extra shifts in these moments.

3) People need to stop taking their health for granted.

If you are thinking about getting in shape, or eating better, cutting out chemicals in your home, or losing some weight, or whatever it is you plan on doing at some point, stop planning and get on with it.  Shit or get of the pot people, because this window of opportunity is fleeting.  The vast majority of us were blessed with normal health at birth.  Obviously I see the irony in saying that because 50% of my family was not, but we’re still in the minority.

And it is up to most of us to squander our good health.  It is ours to waste and crap on.  We as a society are often doing this to ourselves, and we need to freaking stop it. Ask any chronically ill person if they would like to be able to actually make changes to improve their health, and they would look at you like you’re an idiot.  What a dumb question that is!  And yet here we sit as a society, getting sicker and sicker, and we put the blame or organizations, corporations, and everyone else.  By doing that, we take away our power to make our own changes and start the healing process.

Today is the day.  Today is the day you can change your life, whatever that looks like for you.  Most of us still have the option to change something negative about our health.  Not everyone gets that chance.  If you have that opportunity, take it.  Change whatever it is you need changing, and move forward.  Do it for your family, friends, and your kids (if applicable).

Do it for yourself, because you are worth the effort to be well, happy, and healthy.  It absolutely will not be easy, but it will be 100% worth it.

4) I was trying to sleep the other night downstairs with my mom, and looked up at the ceiling to see this. 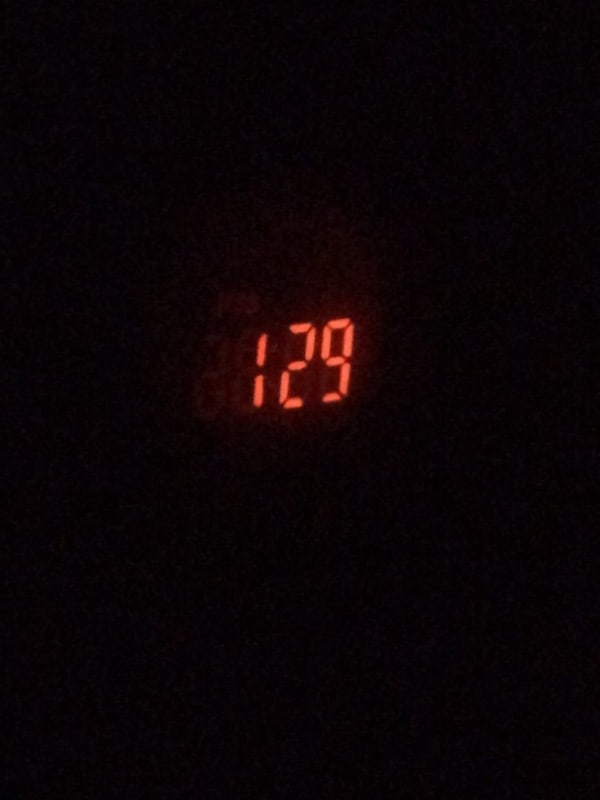 My dad has one of those weird projection clocks, and seeing that just started the outline of this blog post in my head.  Nowhere did I think about item three above, but somehow I just started typing today and didn’t stop.  I’m not sure what part of my brain took over and just wrote that, but it absolutely wasn’t part of the outline.  Hopefully it isn’t something offensive my fingers typed before my brain comprehended my words.  Who knows. We’ll see.
Ever since I found out I was pregnant, I say a silent prayer each night with my hand on my belly. My prayer is “be strong, be brave, love life, be kind, be considerate, be open to others, be understanding, be gentle with others, and love to read”.
At 1:29 am the other morning, I added “be healthy and be grateful for your health”.
Amen.
originally posted on August 27, 2015; Updated on June 11, 2018
12 Comments//Leave a Comment »
Categories: Uncategorized
« Previous PostMeal plan for August 24th – 30th
Next Post » Meal plan for August 31st – September 6th