A Quilt for Baby G

Vague title courtesy of the fact that I know this little girl’s name, but it won’t be announced to friends and family until after her arrival.  It’s a damn cute name though.  That’s all I’m going to say.

I met Kristina when I worked in LA.  We both worked for the same firm, in the same capacity, and both moved to recruiting during our tenure there.  She moved out of recruiting as quickly as possible, as most introverts are loath to make that kind of small talk with random strangers.  Her eventual niche of HR ended up being perfect for her.

In 2006, when the Seahawks went to the Superbowl for the first time, we had a mini Superbowl party at my apartment.  Long story short: really old 1940’s gas stove that you had to light with a match, another guest unfamiliar with said stove left the gas on for five minutes, I lit it, and was hit in the face and hands with a giant fire-ball.  Kristina was there with me while I went to get a hair cut (I was in a shock, and the pain didn’t hit until halfway through the haircut when I started yelling at the poor stylist to hurry the f up), and stayed with me at the ER while my throat was scoped to make sure I didn’t swallow gas, and a while a very nice nurse fitted me with an IV full of morphine.  Lovely, lovely morphine. Fun fact: morphine makes sarcastic people even more sarcastic.  After the meds kicked in, I spent a few minutes trying to convince the nurse who was bandaging my toasted hands, covered in blisters, that I was a hand model, and would this ruin my career?  Kristina just sat by the bed, laughed, and tried to keep my spirits up.  A good friend.

She is due with her first baby on Veteran’s Day.  I’ve been pumping her with color information on the nursery for months, and she finally sent me a few photos.  I was a bit dismayed to see the colors were all so…tame.  Muted greys, white, and yellow.  I have been accused of being “Little Miss Earth Tones” from my mother-in-law, and for a time it was true.  Now though, I am trying to brighten up the world in a tasteful way.  This quilt was not going to be bright and fun, but I was determined to make it sweet and cheerful.

One of the good things about having a tall six-year-old is that he has the wingspan of a condor, and can start holding quilts up for photo sessions when Troy is at work. 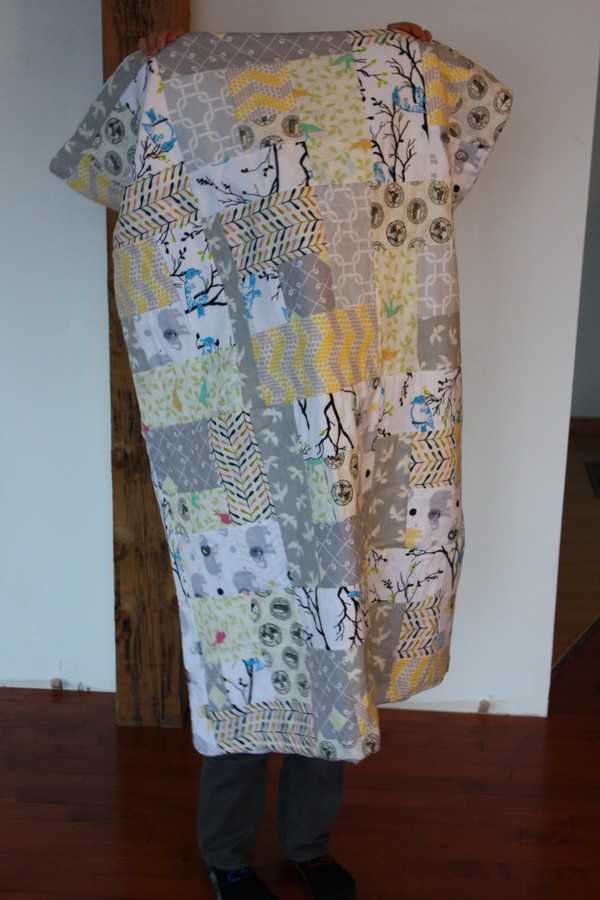 That does not mean he always cooperates, or holds the quilt steady. 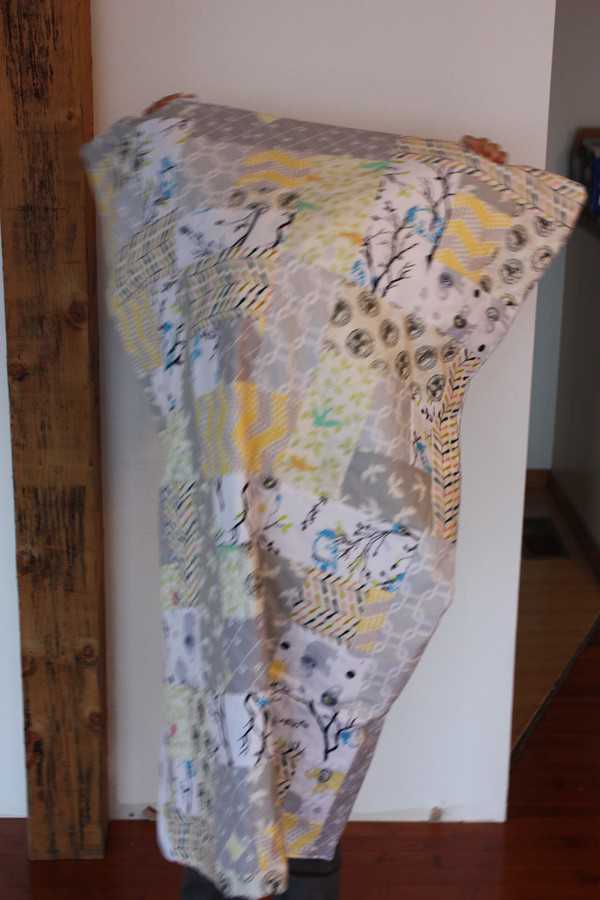 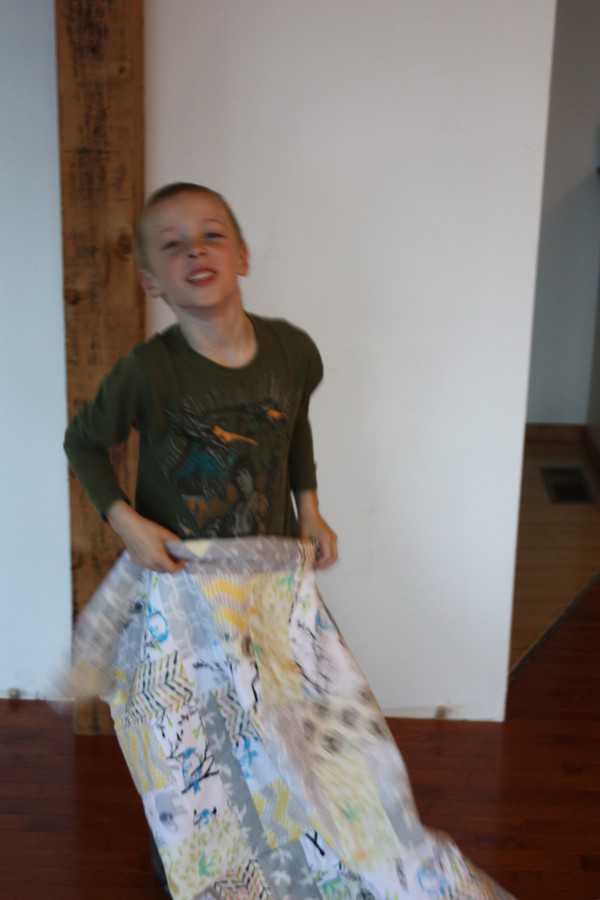 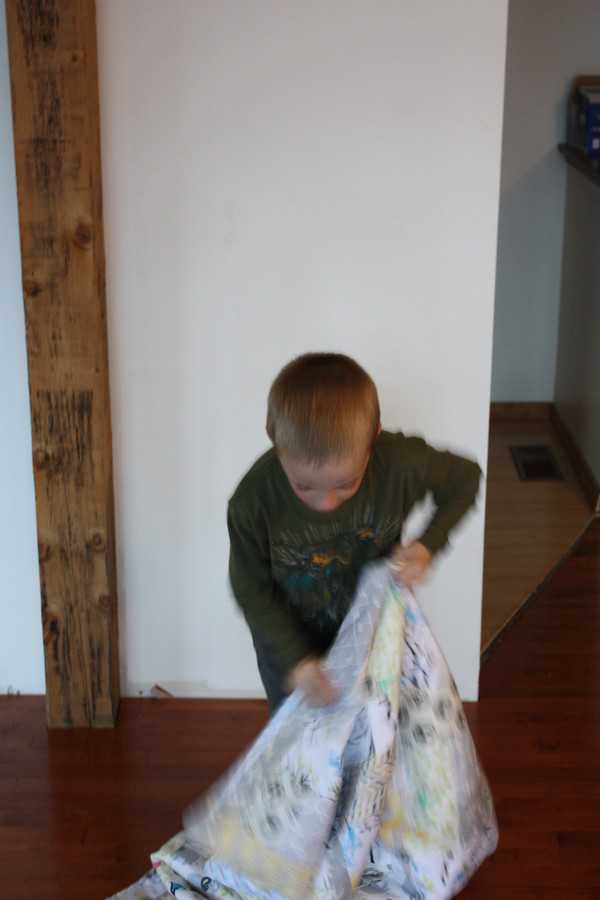 Kristina is from Louisiana, but lived in NYC for a time.  Her husband is from London, so you can imagine the squealing I did when I found this fabric at the store! 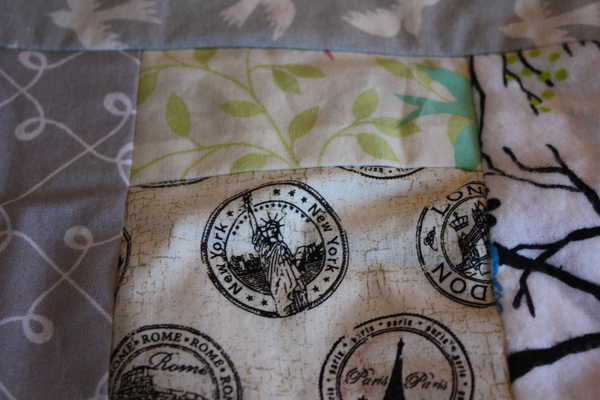 The rest of the fabric was just chosen because it somewhat complimented her nursery, and didn’t make me throw up with too much pink. 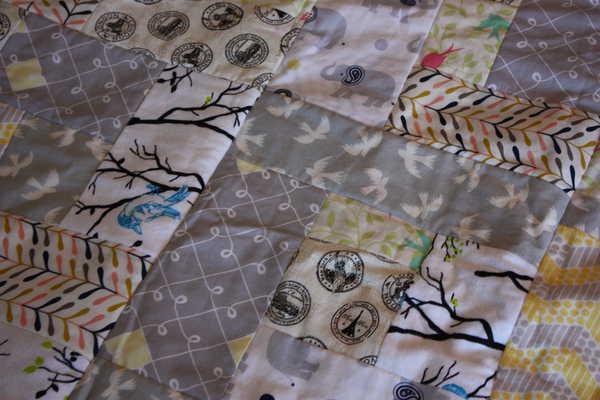 The back is a new fabric that I found at Joanns, that make me want to go back in time and make new backs for every quilt I have ever made.  It’s soooooooooo soft.  Almost like a minky if you have ever felt minky fabric, but not as thick. 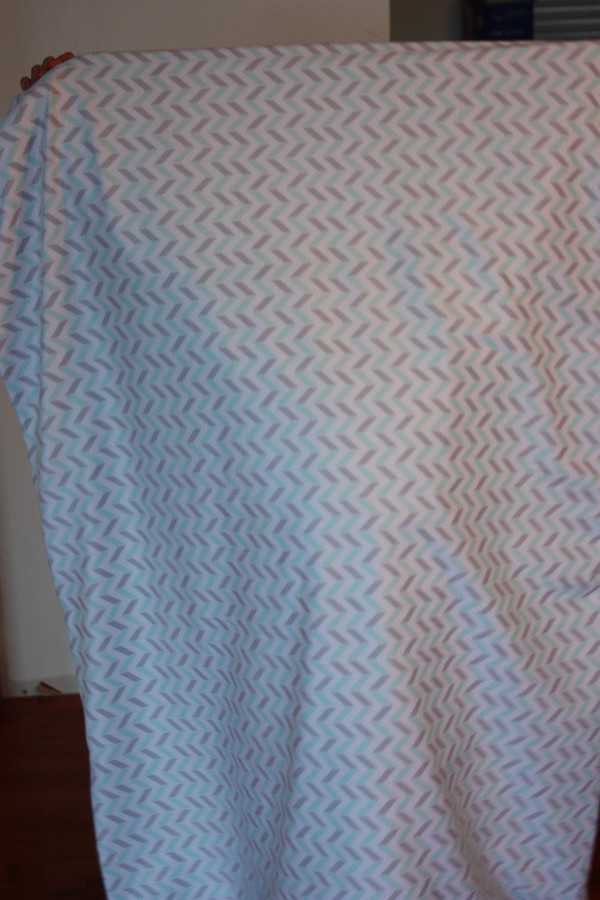 Basically, if minky and polar fleece had a baby, that does NOT pill over time, it would be this fabric.  The woman at the cutting counter didn’t know the name of it, but said it was part of a collection from the Blue Moon brand.  I found it at two different Joann stores near the snuggle flannel.  It was $14.99 a yard, but of course I used a coupon (40% off, and then a 20% off total purchase coupon), so it was fairly reasonable.  I’m totally using this brand for Bennett’s quilt…whenever I get motivated enough to make it.

The quilt style is called a Log Cabin quilt, and is from Patchwork Style.  It’s one I’ve made lots and lots of times, and I always come back to it because a) it is easy b) it is FORGIVING! and c) it is pretty fast.  If I had more time to work on it, I could probably knock it out in two to three days.

So, snuggle up Baby G, I’m glad I can keep you warm and toasty…without having to light anything on fire!

3 comments on “A Quilt for Baby G”