Back to school lunches

The other morning when letting out the chickens, I walked through a giant spiderweb.

And with it, the return to school for many kiddos. And with school, comes my least favorite task of the whole week.  Packing lunches. If I were texting with you about lunch packing, the text would be full of the hammer and knife emoji.  I freaking hate lunch packing.  The irony is, it takes me less than two minutes to make Jack’s lunch, and yet it is 120 seconds of hell.

Back when we were getting Jack ready for Kindergarten (read: buying all the crap), I hemmed and hawed over and over the purchase of Jack’s lunchbox. Yep, over a lunchbox. I searched, researched, and went back and forth over shelling out $30 for a bento box. You read that right – 30 freaking dollars for a lunchbox. What in the world was I thinking? Was I an idiot?

Over two years later, and it is hands down the best purchase we have made in terms of Jack’s school supplies (after three failed backpacks, we finally got one that has lasted more than six months. What in the world are those kids doing with those damn things?). Other than a tiny scratch on the logo, this thing has held up like a boss. 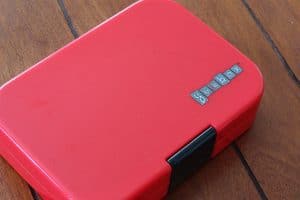 First of all, the name is amazingly hilarious – Yumbox. Yikes. Second, unlike most bento boxes, the various compartments are leakproof.  You could fill each one with soup (gross, don’t do that), yogurt, applesauce, dip, etc., and it will not leak in to the next compartment. Even better, cut fruit will not brown, because the leakproof lid keeps air from getting in there. It is compact, but you can still fill it with enough food to keep your insane kid full after three recesses of running around like he is being chased by bees. With axes. Bees with large axes. 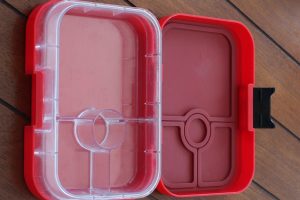 To go with Jack’s bento box, I got a great lunch bag that has also held up extremely well.  It’s made from neoprene, the material used to make wet suits. Every few weeks, I toss it in the wash (don’t tell, because the directions say to hand wipe it down.  Eff that noise), and it looks brand spanking new.

When Jack was maybe 18 months old, I bought a reuseable food pouch for his applesauce habit. It was mainly to take to church, because as any parent knows, the entire church service with kids is pretty much shoving food in their mouths to keep them from talking. Just like God intended I am sure. I think that verse is in Leviticus or something. I’ll need to look. He loved his “applesauce pouch“, and it soon became a go to snack. The pouch is dishwasher safe, and easy to clean and fill. 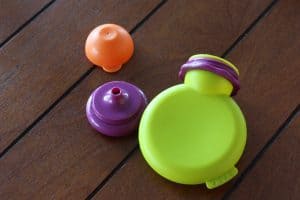 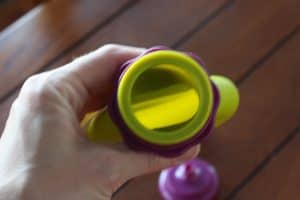 Now that Bennett is here, we may need to invest in another one for on the go feeding. I’m not sure Jack is willing to give it up.

I love to make homemade chocolate pudding, and jello (when time is tight, we also love this natural store bought jello), and I put them in mini canning jars (they also make amazing baby food jars). The pudding freezes fine, and acts as an ice pack for the lunch. Jack always seemed to have problems with the two-piece jar lids that come with the jars, so I have these little plastic ones that pretty much own my heart.

Water bottles are an important part of a packed lunch, because if your kid is like mine, they forget to drink until meals.  We love Liberty Bottleworks (Washington State company that prefers to hire discharged veterans – woot!), and Life Factory.

Now, once you are geared up to pack those hateful lunches, what in the world do you put in them to ensure nothing gets traded or thrown away? Jack is easy in that he pretty much just wants a sandwich, a fruit, something snacky, and a treat. Sandwich is usually just PB&J (our school is not peanut-free, but I would find an alternative in a heartbeat if we were ever asked to not send peanut products. Bread is usually homemade whole wheat bread with crunchy peanut butter (creamy peanut butter…I just can’t even), and homemade strawberry jam.  We also like the pita bread from Costco, and it is GMO-free. Snacky food is usually organic cheddar bunnies (though Jack often randomly decides he doesn’t like them because goldfish are saltier). Fruit changes based on the season (fall – pears and apples, winter – more pears and apples, and citrus, and spring is whatever I can scavenge, with some strawberries in the last month of school). Treats are often a cookie, or homemade lara bar (ball), and some times a Stretch Island Fruit Leather (another Washington company) from Costco.

This year, we’re trying DIY pizzas with mini bagels (sliced mini bagel, a little sauce and some shredded cheese) to mix things up. A lot of kids like DIY “Lunchables” with sliced cheese, lunch meat, and crackers.  My kid ain’t one of them, but it doesn’t stop me from trying every other month or so.

Whatever the method for carrying lunch, or what you put in it, generally a homemade lunch is cheaper and healthier than a school-bought lunch. Generally. Our school lunches are $2.75, and I estimate what I send costs about $1-1.25. If you are buying a ton of premade stuff, or individually packaged items, the cost savings will likely be negligible.

In the end, whatever you decide, don’t forget the note! Nothing too mushy or embarrassing, and extra points for a silly picture.

Good luck this year! I’ll see you in the trenches.

9 comments on “Back to school lunches”