Over the next few months, our church will be helping to build tiny homes for the homeless. And when we say tiny, they aren’t the fancy ones you see on HGTV; we’re talking something about the size of a large garden shed. Bathroom and kitchen facilities will be housed in a building at the center of each community. For the cost of about $2,100 each, these homes will put a roof over 36 individuals currently out on the street.

Troy and I feel very strongly about this project, because both of us have worked with the homeless population. I had some homeless clients in my previous career, and Troy encounters them every single shift as a fire fighter. Due to many different factors, our society is not making a dent in lowering the homeless population. The housing first method has shown to be effective in many instances, and our community is giving it a try.

Before Troy (finally) became a fire fighter, he worked as an EMT for a private ambulance company. Every few days they would get a call to pick up the same homeless patient. They would transport this person to the ER, where they would be evaluated, and released to an in-patient mental health unit. That mental health unit would get them back on their meds, but due to funding restrictions, they could only house this person for three days. They would then be released back on the streets, and Troy and his partner would pick them up again and the the cycle would continue. From a logic standpoint, anyone could see this system isn’t working. From a humanity standpoint, it is incredible that a long-term solution can’t be found. From a taxpayer standpoint, this is completely beetleheaded. The ambulance ride was $500, an ER visit likely $3k a pop, and in-patient treatment at least $10,000. Rounding up to $14k, and this happening probably eight times a month, taxpayers are on the hook for $112,000 (ish). PER MONTH. Beetleheaded.

The goal of the new tiny house communities in our area will be to help stabilize a portion of the population that is very challenging to serve. Anyone who works with the homeless will tell you it is nearly impossible to get someone the mental health or drug rehabilitation help, or even just connect them to services when you cannot find them.  The people living in these communities will work closely with a case manager for getting them the resources they need to improve their lives. 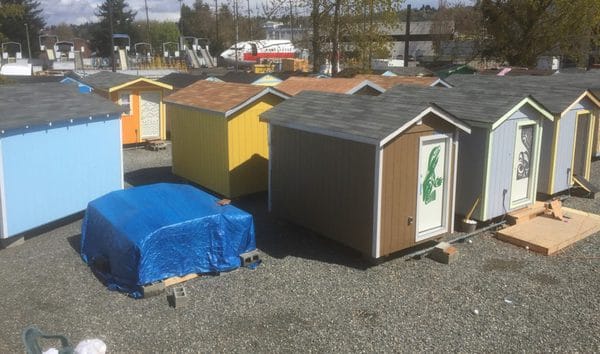 It is very hard to look at the current set up for helping people, and think it is going well overall. As with any social issues, people are complex and diverse, and thus the solutions are as well. For the cost of $2,100 per house, this is an experiment we are hoping moves the needle in the right direction. From a taxpayer perspective, it is loads cheaper than having someone out on the streets. From a faith perspective, the bible is pretty clear on this – house, feed, clothe, and heal those who need it. This route helps put the “human” back in humanity. It is basically the ideal dream for this socially liberal, fiscally conservative Independent.

So, for the next week, 20% of all sales from The Blind T-Rex will go directly to the cost of building a home for someone who is currently without. Maybe we’ll only be able to buy a box of nails or a doorknob, but every bit makes a difference when you are looking to try something new.

If you’re placing an order, don’t forget to use the coupon code “softopening2017” for 10% off your purchase price. Due to Etsy’s limitations on shop settings, to qualify for the free shipping you’ll need to contact me for a custom listing. Alternatively, you can purchase your items normally, and it will charge you the shipping cost. When I see that your order is over $50, I will refund you the cost once I receive the order.

originally posted on May 5, 2017; Updated on March 23, 2018
7 Comments//Leave a Comment »
Categories: Uncategorized
« Previous PostThe Rolling Sandbox
Next Post » Scattered Sundays and Meal Plan for May 8th-14th

7 comments on “Big Sale for Charity – The Blind T-Rex”