A Boy’s Place is in the Kitchen

My grandfather was born in North Dakota to a Norwegian couple who came through Ellis Island. He never spoke English until he went to elementary school. They moved to Washington for timber jobs, he joined the service, and married my grandmother. He worked for Ford as a mechanic until retirement, and built by hand the house my mother grew up in.

Grandpa was a talented carpenter who made himself a shop in the basement of the very house he built. He could and would make almost anything. The house was incredible, with built-in cupboards and drawers everywhere. It was a solid and warm home that was full of love. And in my childhood, it was also full of shag carpeting that my grandmother used to rake after she vacuumed. 🙂  My sister and I often did little projects with him when we stayed overnight with them. I remember one visit, he cut out pieces of wood for us to assemble in to bird houses. My grandma, always one for hating stains, wrapped our hair in scarves, put us in their old shirts, and wrapped my shoes in plastic bags. My sister, being almost four years older than me was trusted to paint her birdhouse without Pay N Pack bags on her shoes.

Someone who could build such an amazing house would undoubtedly demonstrate the same level of quality in all of his projects. When my mother was a little girl, she was gifted a play kitchen crafted by her father. It was eventually given to my sister and I to play with, and also provided us years of enjoyment. By and by, we outgrew the little buttercup yellow kitchen, and it was stored in a corner of my parent’s garage.

While getting ready for our garage sale this summer, we came across the kitchen and a few other items. We sold most of them, but I held back the kitchen knowing the attachment my mom had to it. Remembering the neglected little kitchen a few months ago, I started formulating an idea on a spruce up of grandpa’s work. It may have been motivated to keep Bennett from pulling out every Ziploc in our house, and removing all the manuals we keep while he was in the kitchen with me. 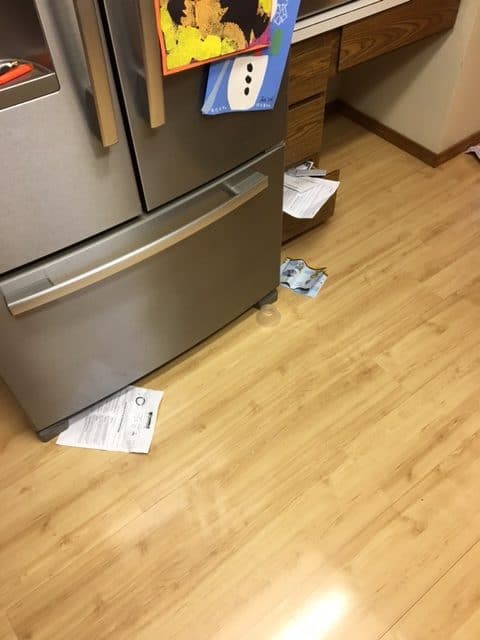 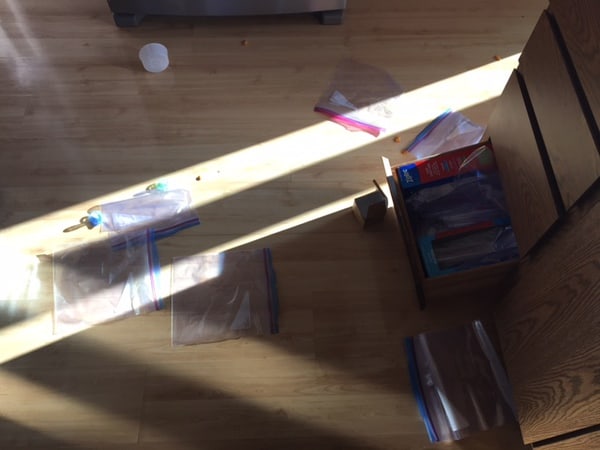 I looked around for ways to modernize the kitchen, but quickly went down the rabbit hole known as Pinterest. Thankfully, I had attached a small rope to my ankle and was able to find my way back by following the rope back out to reality. Side note: Pinterest makes me feel like a wholly unaccomplished person.

I quickly ascertained that I needed to do this my own way, because trying to recreate anyone’s perfect work would be crazy making. My plan was simply to repaint the sweet kitchen, and maybe add a few burners and a little sink. Pulling it out of the corner of the garage proved to be a discovery of such a nice piece, in a very sad state. 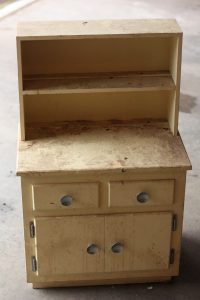 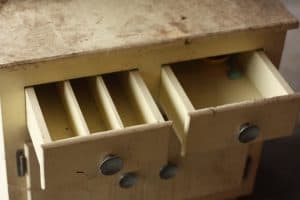 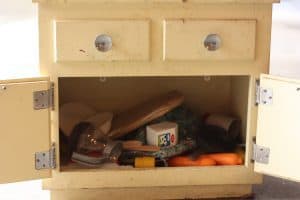 I sanded it down with fairly heavy duty sandpaper. In hindsight, I wish I had taken the thing down to the grain, because some of the paint has already chipped a bit. Anyone who says to lightly sand something to “rough it up a bit”, is likely hiding all the inevitable chipped paint in their photos. I’m sure touch ups will be part of our lives for a bit.

I used some of our leftover paint from the remodel and Bennett’s nursery to achieve a mini version of my dream kitchen. Our disgusting 70’s kitchen will likely never get a make over, but it was oh so satisfying to have something clean and modern looking, in the colors I have always wanted in my own space. Each color took three coats (the white took four or five I believe) of paint, and that by far was the most time-consuming portion of the project. The actual painting was fairly simple, but waiting for each coat to dry was an exercise in frustration for this “immediate gratification” girl. 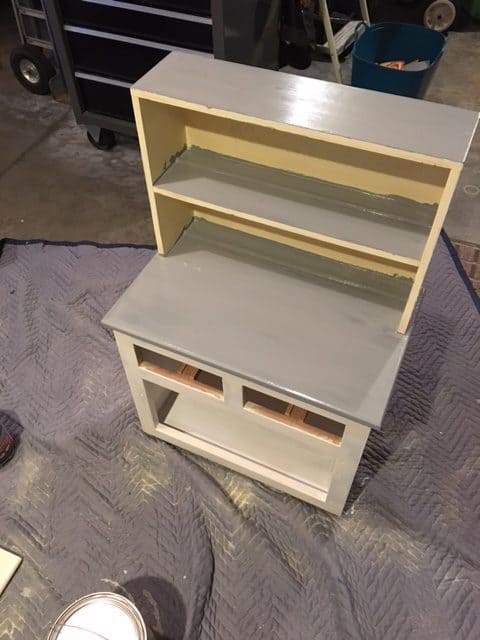 The kitchen was shaping up to be a simple and quaint project. And then Troy got involved, and shit got real. 🙂 Troy is a collector of odds and ends when it comes to hardware and do dads. There was a huge apartment construction project on our street when we lived in Los Angeles, and Troy was always happily dumpster diving in their refuse bins. So, it wasn’t unusual for me to text him while he was at work asking if he had anything that would work for little burners for this stove. That text was the hook that led him to getting involved, and excited about this project. Troy is insanely handy, and would also eat a live coal to make his kids happy, so this was right up his alley. We would text ideas back and forth on how to implement my “vision”, and Troy also spent some time on Pinterest looking for inspiration.

Grandpa had built in these amazing little drawers to the kitchen, so cutting a hole in the counter to drop in a sink wasn’t an option. Troy proposed closing off one of the drawers to add the sink, but so much of the charm of the toy comes from the fact that things open and close and you can store items in there. One of Bennett’s many nicknames is “the squirrel” because he loves to stash things in random places, and I knew those drawers would be like kid crack to him. To solve the sink problem, we went “modern” and simply added a shallow melamine bowl from Target to the countertop as a vessel sink.

We searched for a cast off faucet at Goodwill, and Troy even reached out to friends on Facebook to see if they had one lying around. The only thing we were offered was from a friend that would have required a bit of a drive to go fetch. While roaming the aisles at our local hardware store, I ended up in the plumbing section. A simple P trap proved to be the solution. Also, just for fun, giggle that it is called a “P trap” while you stand next to the toilets. Stop giggling when the non-amused Ace Hardware employee sighs. 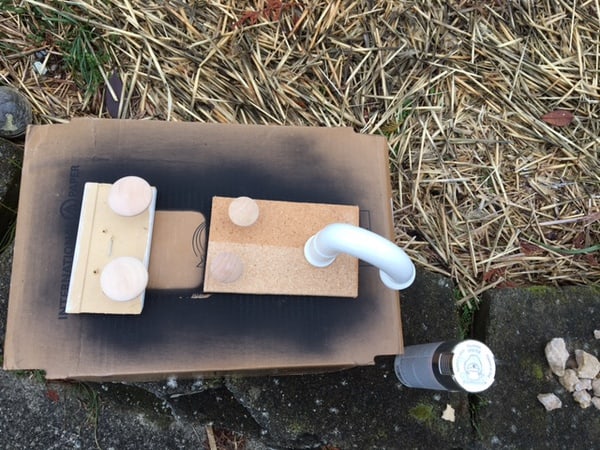 The idea of burners were still something that had us stumped. Goodwill, hardware stores, and even the craft store left us without a solution. An idea came to me while driving home from Joann’s, and when I got home I offered my parents a deal they couldn’t refuse. In exchange for two of their wooden square coasters, I traded them two of my junkier ones. The coasters were the perfect burner size for our little stove, and a simple coat of black spray paint turned them in to exactly what we needed.

Next, I sprayed some wooden dowels for the grate things (what are they called?) to go on the burner. Pro tip: attach some painter’s tape to the inside of a cardboard box. Put the dowels on top to stop them from rolling around while you spray and then let them dry. 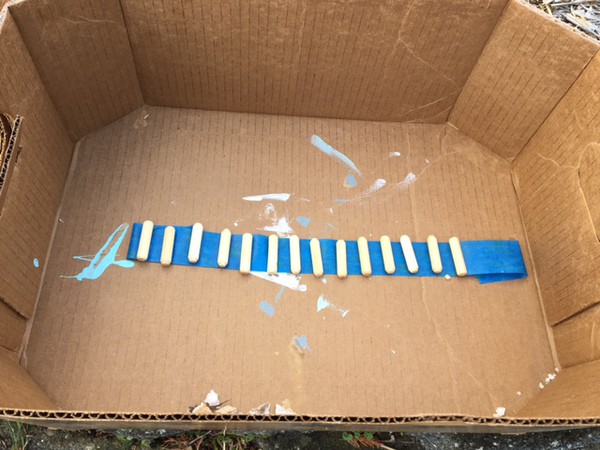 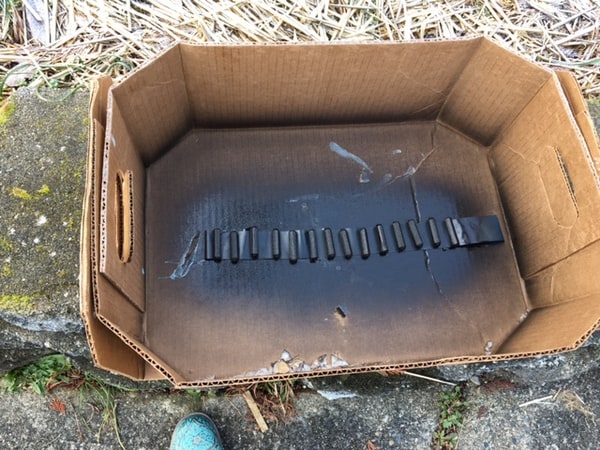 Non-pro tip: spray them black before you remember you actually needed them to be silver. Sigh. Repeat the above process, but this time with silver spray paint. I then used the hot glue gun to attach them to the coasters. . During that process, I had the most unintentional “that’s what she said” conversation with Troy:

Troy attached part of the hardware that came with the P trap to the counter. I don’t know what is called, so we’ll just call it the PeePee collar. The “faucet” twisted right on, and then drawer knobs that I had spray painted silver were glued on. Larger drawer knobs also spray painted silver were glued on for stove knobs. We were running out of time, but at some point in the future, Troy will get to figure out how to attach them to spin and turn. He didn’t know that fact until right now when he read it. Surprise honey!

I had removed the cupboard doors to paint, and Troy had the idea to turn one of them in to an oven. He removed the center of the cabinet, installed a piece of plexiglass that we had gotten off of Freecycle years ago, and attached a simple drawer pull I had found at the hardware store. Using the same hinges, he simply attached them to close at the bottom.

The super old and kind of gross play food and dishes that had been stored in the kitchen all these years, were cleaned and arranged in the drawers and cupboards. Some of the amazing late 70’s/early 80’s gems were a mixer that still spins if you push a button, hot pads that were crocheted by some grandma; I’m not sure which one. The most amazing gems were the Tupperware Toys play dishes from my Nanna. She was a big deal in the Washington Tupperware scene, and I never knew most kids didn’t have Tupperware Toys growing up. 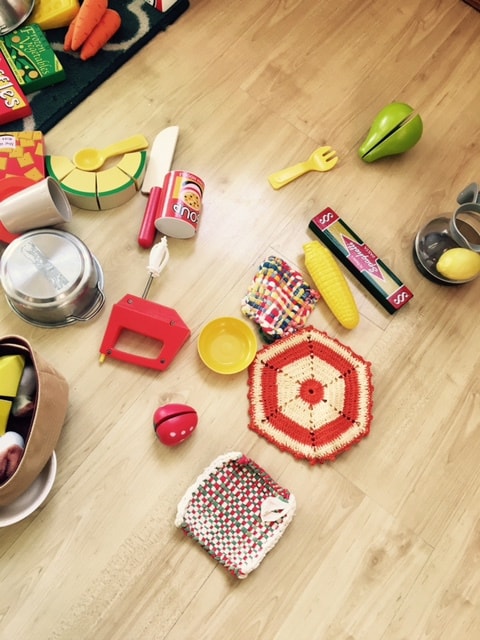 Troy’s sister got Bennett some wooden play food for his birthday present. He was generously gifted this set, this one, and this one. At some point, I’ll find the right little piece of furniture to redo to make him a fridge for his kitchen. Until then, assume my kid is a prepper who cans, dries, and ferments all of his food. I also picked out a little pot and pan set at Goodwill for $2.99 and $.99. Proper equipment is an important part of a cook’s equipment! 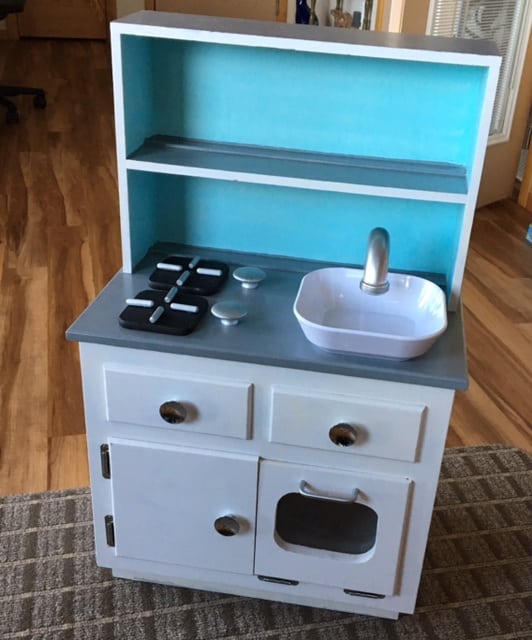 At 5:30 am, I brought the kitchen up from the garage on Bennett’s birthday. I set everything up, and waited for him to wake up. And waited. And waited. And frosted a bunch of cupcakes in the meantime. After he woke up, I aimed his little push walker towards the kitchen, and ran in there so he would chase me. I’m not kidding, he rounded the corner and screamed when he saw it. He then spent the next 30 minutes playing with it non-stop, and Jack joined him as his sous chef about halfway through. After his party, he played with it for another 45-60 minutes, and not a single Ziploc bag was removed from any drawer. It was a miracle. 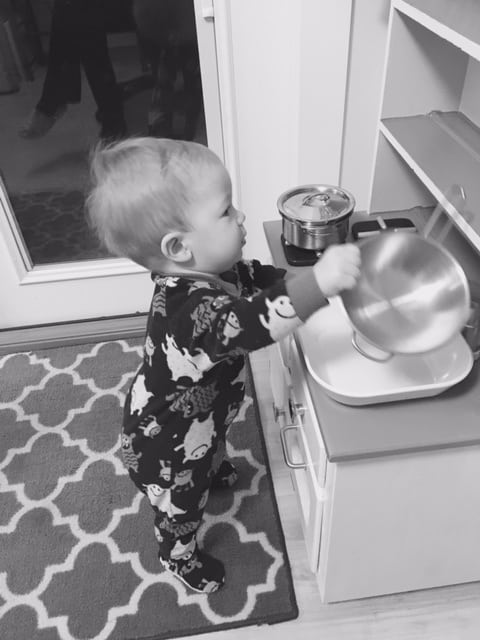 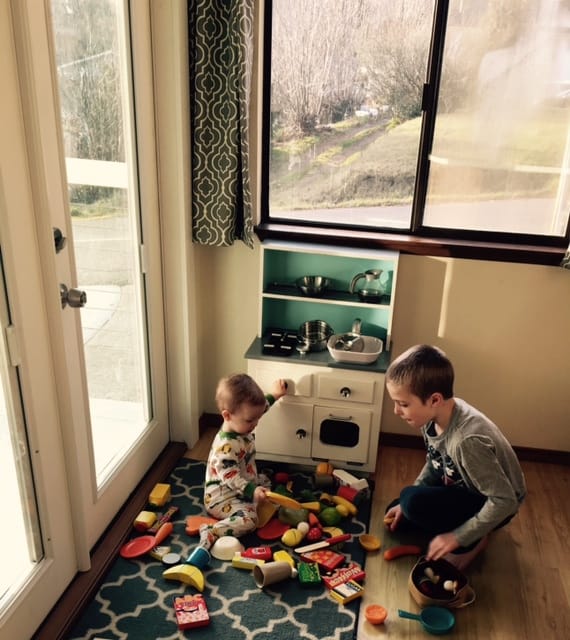 I had to talk Troy back from installing a tile backsplash. It may not be the fanciest kiddo kitchen out there. It won’t “win” Pinterest (hold me, that place scares me so), and it doesn’t have all the bells and whistles that make most kid toys have today. But, every single time I look at it, I picture my grandpa working on it down in his shop for weeks. I thought of him while sanding, painting, and adding new things for the great grandson he never met. I smile when I see Bennett play with it. I’m sure it made my mom smile to watch my sister and I play with it, and I know it made my grandpa smile to see my mom play with it. Fancy or not, it is a multi-generational treasure that makes me feel just a little bit closer to a man I miss very much. I hope we made him proud. 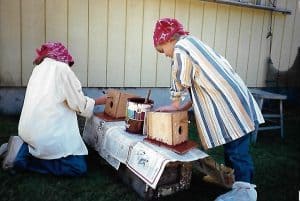 21 comments on “A Boy’s Place is in the Kitchen”