Remember the sad garden tour I did in July?  Well, right afterwards, we had a few days of 90 degree temps, and then consistent nice sunny weather.  Then more 90 degree weather, and then things stayed sunny and warm.  The garden exploded!

I’ve canned 9 quarts and 2 pints of kosher dill pickles, and 12 half pints of dill relish from the cucumber plants that I previously feared would never produce a single cucumber.  Jokes on me I guess!  They’re almost done for the season, but I can probably get 1 more pint of baby dills.  Note to self: 6 plants is a perfect amount for next year. 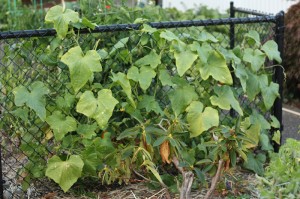 My three pumpkin plants have exploded, and grew six inches in 48 hours during a heat wave.  They have taken over the blueberry bed. 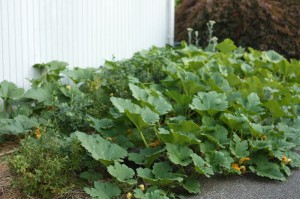 I’ve also grown some plastic ride on toys.  I’m pretty amazing like that.  These are essential items to keeping 3 year olds busy while you garden. 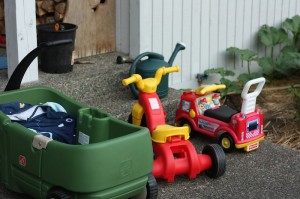 Here is the “main” bed of the garden.  The tomatoes are getting large, and are starting to ripen.  Slowly. 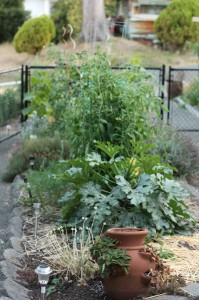 The raspberry bed is putting on its second crop of fruit, and they are huge compared to the crop earlier in the summer.  Three of the six plants I put in survived, and they’re all putting out so many little plants.  I’m so very excited for next year! 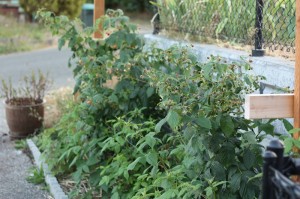 Last year I did most of my tomato canning in October after pulling the plants, and I am assuming this year will be the same. 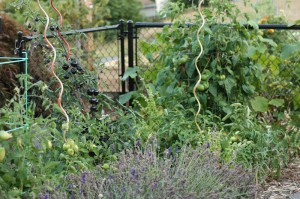 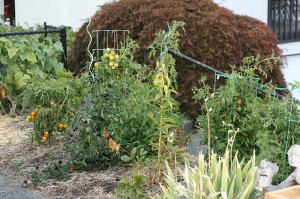 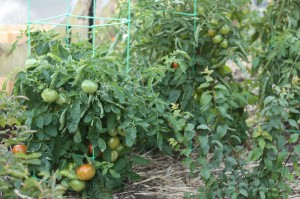 One of my kale “trees” has grown so large that it fell over. 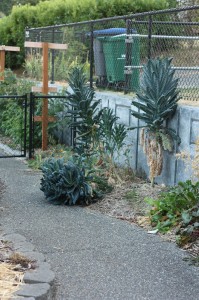 The strawberry bed is putting on the second crop as well.  These ones are a little bit bigger than the early crop. 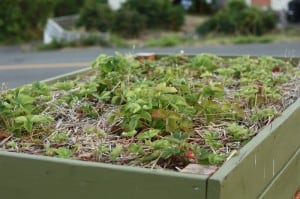 Remember my invasive plant battle?  Rhubarb vs. morning glory vs. day lilies?  Well, thanks to constant monitoring of the morning glory, rhubarb appears to be victorious!  That rhubarb plant is a fighter.  My sister pulled it out of her garden after the dogs chewed on it.  After she tore it out, she threw it on her compost pile, and I believe at one point a barrel or box was laid OVER it. 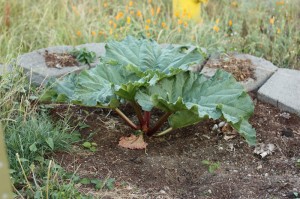 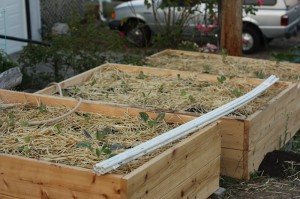 These are my concession prizes from Troy for being gone ALL the damn time.  He built them when Jack and I were visiting my friend Anne.  You may not have known that someone can love 3 wooden boxes so much, but I can and I do.  They make my heart happy!  I’ve planted the fall garden in there because this part of the yard gets the most “sun” (aka least gray gloom) during the fall/winter.  The fall/winter garden has brussels sprouts, cabbage, beets, carrots, spinach, and lettuce.

You’ll see some PVC pipes laying in the front; those are going to be installed in some brackets (yet to be installed), and then covered with plastic to create cold frames/ghetto green houses for when the frost comes.

Jack “helped” me plant the garden by dumping 1 package of carrot seeds and 1 package of lettuce seeds in each corner of the box closest to the driveway.  I started to yell “no”, but stopped myself and realized that would only discourage his interest in helping.  So, I now have a collective of tiny plants growing in the corners, and I couldn’t be happier.  I know Jack will love watching them “grow” (after mommy sneaks out there and thins them), and perhaps, just maybe, he’ll try eating some of them.

A momma can dream, right?