As I sat in front of a blinking cursor on Sunday night, I started texting my friend Elaina for post ideas. “What should I blog about this week” I asked. Her suggestions were “how you prioritize your time, how you pick your battles as a parent, and your future as a life coach”. A gaggle of friends that I group text with often jokingly refer to me as the “life coach” for my nuggets of living the best life ever. Problem: “Someone at work is being a jerk”. Me: “bring in a tube sock full of batteries and slap it against your hand while glaring at them”. Problem: “these papers are taking me forever to grade”. Me: “give everyone a B. The good students will work even harder next time for the A they know they deserve, and the crappy kids will be thrilled”. Having such a knack for offering advice is both a gift and a curse. 🙂

although good suggestions, none of those things really excited me at this time. Then tonight, I opened my fridge and thought “man, this place needs a good scrub down. Kind of gross. Hmmm, I bet people would love to see my dirty fridge”. Folks, inspiration for crappy posts can strike at any time! 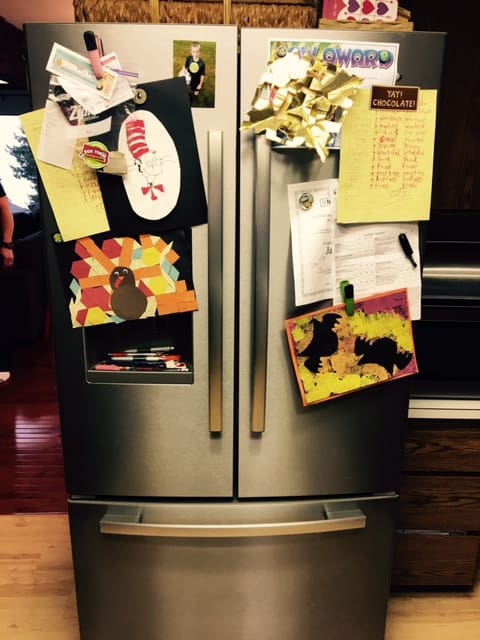 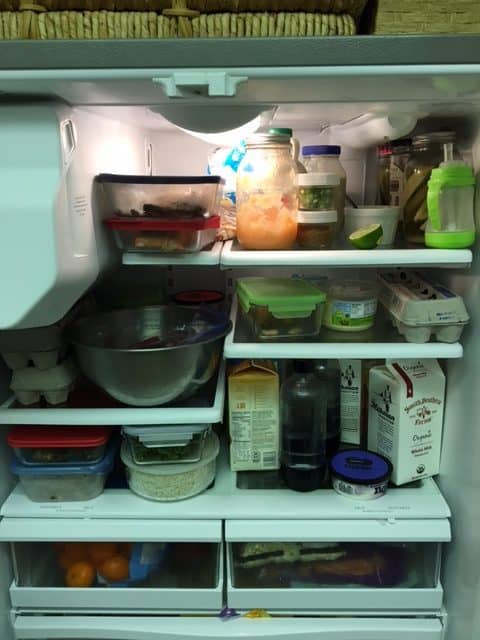 From the top (left to right): leftover grilled salmon from family dinner, homemade applesauce, diced onions ready for another dish to be made later in the week, leftover peanut sauce from tonight’s chicken satay, flatbread from Costco that Jack loved and now no longer wants, my uncle’s homemade tartar sauce, a dish of applesauce Bennett was eating in the bathtub and will finish tomorrow, half of a lime, homemade pickles, pickled asparagus, organic maple syrup from Costco, and a sippy of milk.

Middle shelves (left to right): two dozen eggs, plus 1 egg left in another carton, a bowl full of strawberries I was defrosting for a recipe that tasted ok but looked like a pile of crap. I should use them and make a few jars of Easy Strawberry Jam. But I won’t. Let’s be honest, I’ll either put them back in the freezer, or use them this week for smoothies for the boys. And then be bitter that the bowl is taking up so much space. Behind the bowl are three tubs of Noosa yoghurt. Have you ever had Noosa? It’s so good. I fell in love with it while pregnant and harfing. It was on sale this week and I had a coupon!

There is also a container of whole wheat cookie dough. The boys (Jack and my nephew) and my mom get a cookie every day after school with their smoothies, but I found that if I made the cookies at the start of the week, I would eat most of them by Wednesday. So now, I make the dough, roll it in to balls, and bake three a day in my convection oven. Less tempting that way. Unless of course I just want cookie dough. We also have a container of grated parmesan that we still to this day call “sprinkle cheese” after Jack named it that when he was two. As well as a container of rice leftover from dinner.

Bottom shelf (left to right): leftover peanut satay chicken from dinner tonight, and a container full of chicken grilled with only olive oil and a tiny bit of Montreal steak seasoning. Since Troy was firing up the grill, I had him cook up enough chicken for the rest of the week to use in chicken salad, and for the chicken tortilla soup. Cook once, eat three times. There is also a giant container of Zesty Quinoa Salad I made today to be eaten for two different meals this week, and lunches.

Oy, we have so many liquids in our fridge. Cashew milk for smoothies (my nephew doesn’t tolerate dairy, and Jack selectively avoids it). We have whole milk from Smith Brothers for Bennett, sparkling water from our Soda Stream, organic orange juice from Costco, buttermilk to make Whole Wheat Pancakce later this week, and another tub of Noosa because my sister gave me a coupon for one free container. 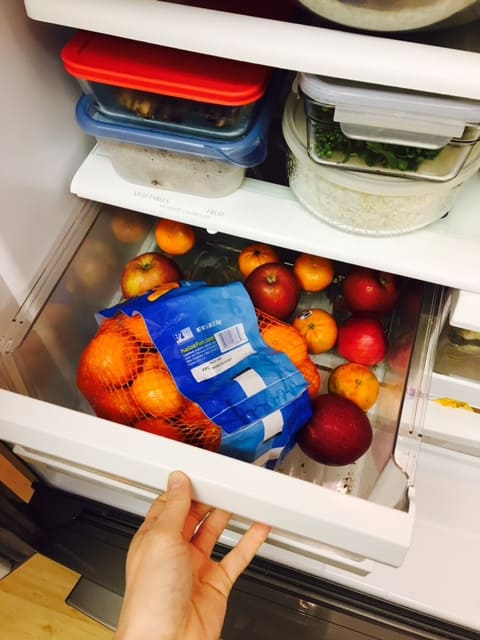 Fruit drawer has a bag of Halo mandarins (I always have these during the winter months), and some fuji apples. 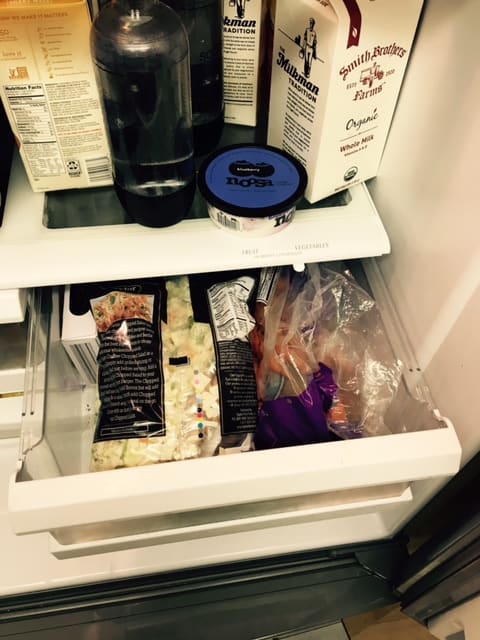 Veggie drawer has organic carrots from Costco, the cashew crunch salad from Costco, and a box of steamed baby beets from Trader Joes. Perfect for a quick goat cheese and beet salad. 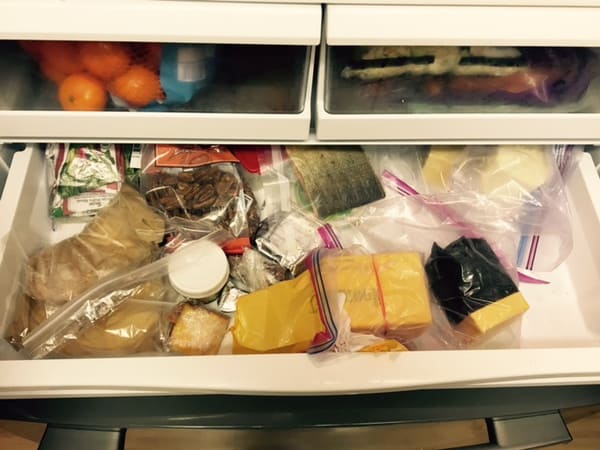 Cheese drawer has…cheese in it. Tillamook extra sharp cheddar, Tillamook medium cheddar, mozzarella for homemade pizzas, horseradish cheddar, and goat cheese. There is also Boars Head smoked turkey lunch meat, and my dad’s delicious smoked salmon. I have a bag of pecans in there because I don’t use them quickly enough and raw nuts tend to get a bit rancid at room temp after a while. I also have old seeds in the fridge that need to be thrown away because they weren’t stored properly for years and need to be tossed. And yet, they sit there. 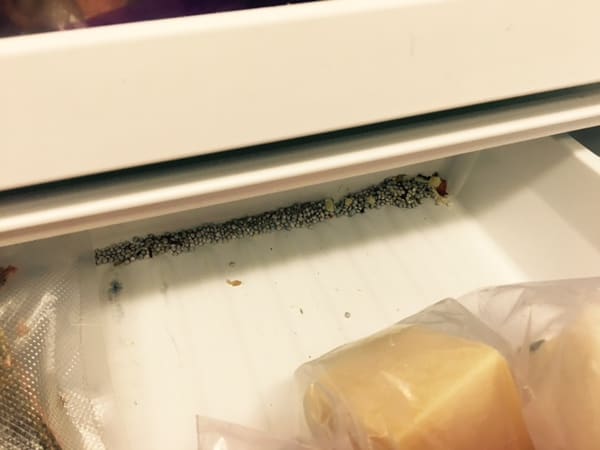 Every time I open this drawer, I see seeds that spilled out probably a year ago. I think to myself  “someone should clean that up”. And then I realize that someone is me. So, I close the drawer, and back away slowly. La la la. 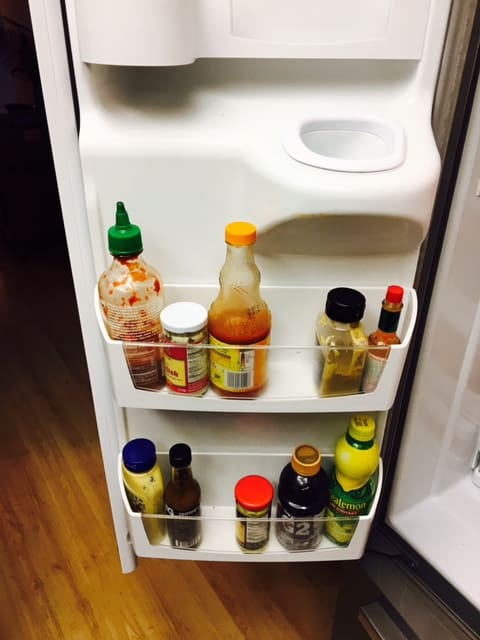 Butter up top (out of the picture), sriracha, horseradish, buffalo wing sauce (I think?), brown mustard, Tabasco, dijon mustard, Yin Yang hot sauce, chinese mustard, a Gatorade that was from a soccer goodie bag and will never get consumed so I should just donate it, and lemon juice. 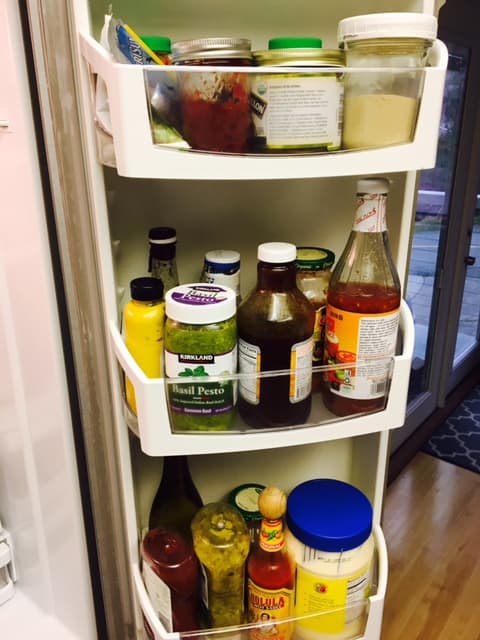 Middle shelf: Yellow mustard. Sensing a theme? I like mustard. Pesto (because I didn’t make and freeze enough homemade last year), organic BBQ sauce from Costco, some really old teriyaki sauce that I need to throw away, but probably won’t for a while, sweet chili sauce, a salad dressing that literally has 2 tsp left in it, and organic marinara sauce from Costco.

Bottom shelf: organic ketchup, a bottle of white wine someone gave us and we’ll never drink. Is it bad by now? Relish, more hot sauce, mayo (baaaaarf) for Troy, and I am fairly certain another jar of Costco marinara. Should probably combine those…

So there you have it. My fridge. Sexy.

Maybe I should have shared more life coaching tips instead?