Fun Money for Kids, and Braces 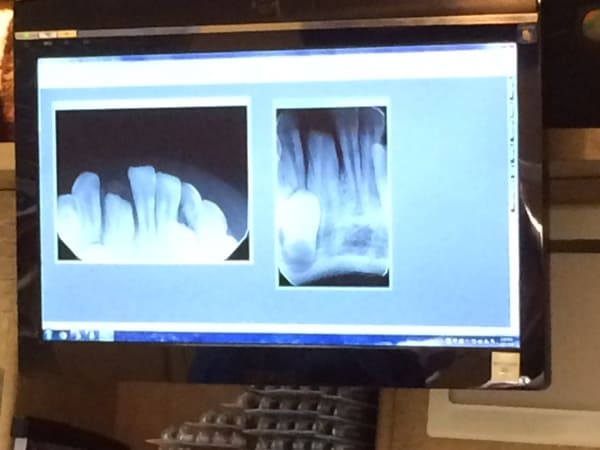 So, yeah, we’re already saving for braces.  That was Jack’s x-ray when he went to the dentist last month.

I’m being punished for making fun of my sister for years for being “an orca” for having so many teeth it seemed like she had one pulled every few weeks.  And braces, and oral surgery, and the list goes on and on.  Note to self: karma is making me look like a giant douche.

Our dental insurance covers $1,000 for a lifetime of orthodontics work, but much like social security, I’m not counting on that money going too far when we actually need it.  So, rather than freak out in three to five years when it’s time for Jack to get braced up, I’m setting aside money now.  Each pay period, I take out a set amount of cash that includes spending money for Troy and me, money I squirrel away for us to have (few and far between) date nights, cash I stash if there is ever a power outage and our debit cards don’t work (tip courtesy of my friend Elaina), grocery money, and money for garden supplies.  A few months ago, I started setting aside $20 of that money in an envelope marked “braces”.  It always seems silly to save such a small amount, but in a few short months we’ve already saved $120 towards J Bone’s metal mouth.  I figure by the time he needs them, I’ll have stashed away almost $1,800.

I approach most larger purchases like that, as long as I know about them ahead of time.  Taxes, annual life insurance premiums, and Christmas are saved for, a little bit at a time for as long as I can manage.  I’m always amazed at how a little becomes a lot when given the chance.  That’s what she said.

The title of this post is fun money for kids, and braces.  We’ve covered the braces, but now I want to share a little tip with you about how we pay for fun excursions with Jack.  Recently, Troy and Jack spent the whole day in Seattle and took in the Harlem Globetrotters game.  They rode the Big Wheel on the waterfront, ate cookies as large as their heads (can you tell I wasn’t with them?), and had lunch.  Shelling out that kind of cash at once is a hit to the budget, but we never sweat such events because of our outlook on “kid’s fun money”.

Years ago, I made Jack a little cloth ziploc bag, and somehow it became storage for his fun money.  When my aunt and uncle watched him for all the years when I was working, I would put the ziploc in his backpack for their outings.  Once he started kindergarten and their outings ceased, I kept adding cash to it every pay period.  We stuff $20 a month in there, and months at a time will go by without us spending a dime. That usually is a result of being too busy, or nothing that interests us going on, but the “kitty” will grow and eventually a fun event will come up and bam, the money is there.

When you’re on a tight budget, being able to have special outings without stressing about the bill is great.  Saving up is rad.

What is your favorite way to save for big purchases?

10 comments on “Fun Money for Kids, and Braces”