First Time Visiting? Start Here!
Home » Uncategorized » How to: get out of the house in the morning without stabbing a family member in the eye with a spork

How to: get out of the house in the morning without stabbing a family member in the eye with a spork

I wanted to write the longest ever post title.  Done!

I have been working outside of the house since Jack was four months old.  For about 75% of that time, Troy has not been around to help me out.  I’ve been rocking solo mornings since the dawn of time.  I’ve had terrible angry mornings, and mornings when we waltz smoothly out the door with nary a worry.  We’ve gotten it down to a science (well, Jack and I have), and I’m going to share our tips with you today.

Just a warning, the first one is going to piss you off.

1) You have to get up before your kid(s)
I know, I know, you’re already tired.  You’re so exhausted that your eye boogers have eye boogers.  I get it.  My kid slept 90 minutes at a time until he was 13 months old and I commuted 2.5 hours a day.  I get your level of tired.  I’ve lived it.  I’ve drooled at red lights in sympathy of your level of tired.

But getting up at least 15 minutes before your kid(s) is going to make your life so much easier.  Having silence to take a shower (and maybe a poop if you’re lucky) solo without listening to whining and small people begging to watch Dinosaur Train will allow you to start the day with a sliver of sanity.  Personally, I get up way earlier than anyone else in the house, but that is so I have 30-45 minutes to work out, shower, get ready, and finalize any little tasks that have to be completed before my fortress of solitude is pierced with other people’s voices.

2) Keep the damn TV off
From the time Jack wakes up, until the time we are rolling out the door, exactly 35 minutes passes.  In that amount of time, he gets dressed, eats breakfast, brushes his teeth, and gets to watch a little TV.  TV is the very last part of our routine, and keeping the boob tube off ensures a smooth morning.

TV is used as a motivator for Jack to get a move on and not dawdle with his tasks.  And he doesn’t get the choice to rush through breakfast so that he can watch more TV.  Homeboy tried that once and ended up starving that day at lunch time.  I warned him, but let him live out his little “I’m full” lie, and he’s never done that again.

3) Determine your defense
Choose your defense: man on man, or zone.  In our house, we have to do man on man.  Troy’s schedule has been so wacky for so long, that he can’t keep the routine straight, and I ended up having to march around the house barking orders to a grown man and a five-year old.  The five-year old at least knows the routine but gets confused when Troy throws a wrench in the order of things.

My aunt and uncle watched Jack until he was in kindergarten, and the only times I was ever late dropping Jack off at their house, my uncle would meet us at the door saying “Troy must be home this morning”.

After too many mornings of stomping around saying “how in the world can a child remember the routine, but you can’t”, I had enough.  I cut Troy out of the equation and Jack and I just had to pretend he wasn’t there.  Sounds cold? Sure, but it got us out of the door with limited drama and no tears (from me yelling at everyone).

If you take a “zone” defense approach, make sure you each have a finite set of tasks that you are responsible for accomplishing, and making your child accomplish.  And don’t change it from day-to-day.  You also need to know each others tasks, in case someone is on the injured listed (aka, your husband is constantly sick like mine).

4) Preplan
A few times a month, I will make a bunch of breakfast foods to freeze.  Whole wheat waffles, mini quiches, and a buttload of bacon are favorites.

Every night, I rub Jack’s back in bed after we read books.  We talk about two things: 1) what was the best part of his day 2) what he wants for breakfast the next morning.  Having that locked down the night before means no guess-work about what he’s going to eat in the morning when he is in full on grump mode.

Boys are generally easy when it comes to get dressed.  In the summer, it’s: shorts + cool superhero shirt.  Cooler months: jeans + cool superhero shirt.  If you have a kiddo that takes longer to decide on just the right outfit for the day, I would recommend laying out the clothes the night before.  I’ve even seen some parents hang one of those canvas hanging organizers meant for shoes (not the ones that go over the back of a door) in their kid’s closet, and have their child pick out seven outfits, and put one in per section of the organizer.  The child is not stuck to a certain outfit for a certain day, but the guess-work has been taken out of the equation and they have seven outfits picked out for the week.

5) Don’t take any shit
This might sound mean, but maybe it is.  About fifty percent of the time, Jack is an angry beast when I get him up.  The other morning he yelled “you’ve got to be kidding me” when I woke him up, and then chucked his stuffed kitties at me.  On those kinds of mornings, I simply say “I’m sorry we both had to wake up early today.  I know it’s not fun, but we have the choice to make it a great day, or you can be a pouty butthole.  Now stop whining, and get moving”.

Troy on the other hand, will try to reason with him, and have a mini therapy session about why Jack is so grumpy.

He’s pissed because we woke him up; mystery solved.

6) Keep to the schedule
There are days I go in to work late (because I have to work late), so the wake up and departure time is different, but I make sure we stick to the same routine.  The exact time of the day doesn’t matter, but the order of how we get ready for the day does.

With a consistent schedule, they know the order of actions that need to occur, as well as the general time allotted to each activity.  If Jack is moving slowly, I will do a “countdown” reminding him we have x number of minutes until departure.

For visual learners, you can make a chart showing the order of events that need to occur for you to get out the door.

For anyone curious, here is our exact schedule:

Some days it is a bit more bumpy than the above scenario, but honestly it is pretty rare these days.

Though some mornings require headlamps for brushing teeth, because well, you know. 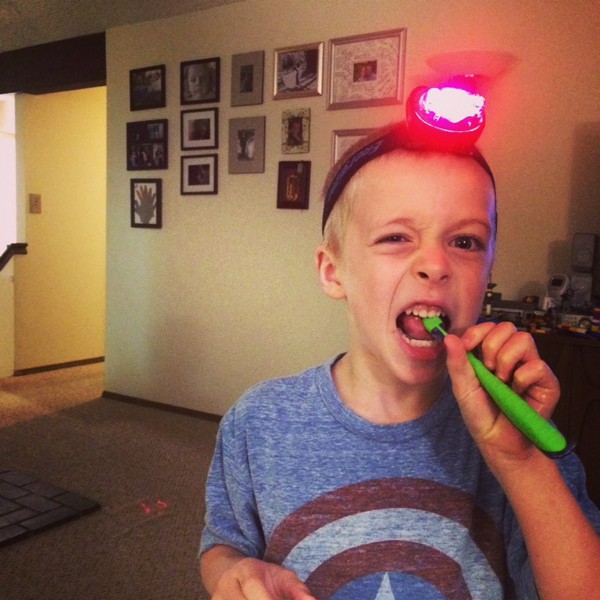 Any tips or tricks that work for getting your family out the door on time?

23 comments on “How to: get out of the house in the morning without stabbing a family member in the eye with a spork”