This is how any birthday related conversation goes in my house:

Troy: What do you want for your birthday?
Me: Nah, nothing.  I don’t want to spend money on a present.
Troy: Uh.  Huh.  Well.  Ok
Me:  Oh wait, I did think of something.  Can I give you some cash that I’ve saved in my gardening fund, and you take your truck and pick up some pavers for me?
Troy: Sure!

Five months later, Troy had no recollection that any such conversation took place.

Determined not to wait until my next birthday to get the present from my last birthday, I stole Troy’s truck on Friday, and went and picked up my own damn pavers.  Happy freakin’ birthday, eh?

We have this garden bed in the middle of our front yard.  It was created some time in the early 2000’s when my dad had a “gimp lane” put in for wheelchair access.  They poured a lovely pebble path to link up to the wheelchair ramp on the front porch.  It connected at one part with the old walkway, and a random “hole” was left in the middle.  The neighbor put in pavers to line it, and when we later moved in to the house as a rental, this became my biggest place to garden.

You know what you get when you plant in the middle of concrete?  Really really happy plants (the sun sluts) like tomatoes and beans and cukes.  During the summer, the sun is on this section of the garden from 7:30 am – 7:30 pm.  Then, after the sun goes down around 9:30 pm (I adore the long Pacific Northwest summer days!), the rock starts pumping out heat to keep those plants warm all night.  We don’t have a long warm growing season in Seattle, but I’m convinced this “heat island” is what allows my tomatoes to thrive, when other gardeners can’t grow them.  I typically can’t harvest the long growing (100 day +) heirlooms until October, but I still have success, and for that I am thankful.

This planting bed is not very deep, and one side had crooked pavers that always kind of drove me a little nuts.

I started by laying the pavers on top of the existing ones.  Sorry about the photos.  When you can only get stuff done in the middle of the afternoon, the light is bright! 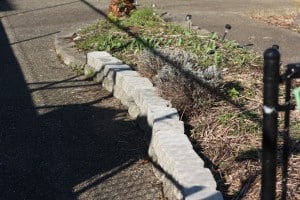 When I got to the part where the pavers were slanted and driving me nuts, I removed those and dug in to the soil a little bit, laid the old ones back on, and eyeballed it until they were more level.  Speaking of level, at one point, Troy said, do you want my level to make sure they’re even. 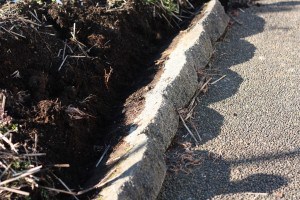 That husband of mine has high expectations for projects to look perfect, but since he has zero time to help me with them, he gets what he gets.  I’m not a perfectionist; I just want shit to get done.  Instead of the level, I simply stomped on the pavers until they “looked right”.  I then continued on until there was a second layer of pavers all the way around.

While digging, I found two carrots that had accidentally overwintered! 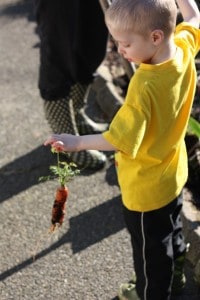 From there, I made a very late to the game “lasagna bed”.  The lasagna style of gardening is best done in winter, allowing everything to break down during the winter.  Since I didn’t get my pavers in fall (birthday sniffle), I’m doing one now.

While I was hard at work, Jack and Troy were enjoying the sunshine.  Initially, they wanted to go to the beach, but I convinced them to stay home so that we could spend time together as a family – a very rare occurrence.

I also had the added help from the neighborhood peacocks.

Lasagna Layer One
I spread shredded paper from work, and then wet it down.  The ladies in our office save huge bags of shredding for me.  I use a handful of paper in the compost every time it gets dumped. 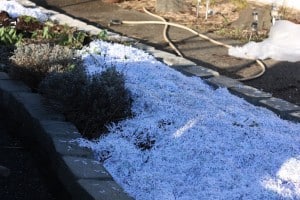 Lasagna Layer Two
On top of the shredded paper, I laid three HUGE bags of icky wet fall leaves that have been living under our deck since November.  The grounds crew at work and I have an understanding.  They place bags of leaves by my car, and I place homemade goodies in their office.  It’s a good deal for all parties involved. 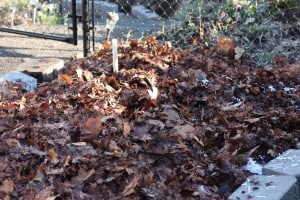 Lasagna Layer Three
I added cardboard on top of the leaves, and then soaked it with the hose.  The cardboard has also been living under my deck since fall, and I know Troy is happy to see it go! 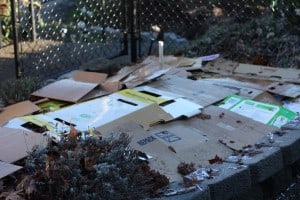 Lasagna Layer Four
The cheesy mozzarella topping of the whole thing was straw, that was also soaked with the hose to keep it from blowing away. 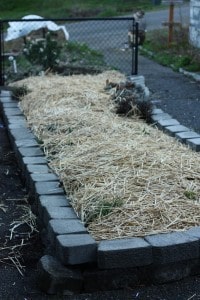 The idea of lasagna gardening is that the materials break down slowly creating a wonderful environment for worms, microbes, and other  beneficials while also acting as a type of mulch.  Mulch = less weeding and watering later in the summer.  Additionally, done properly, the lasagna bed can smoother weeds, and grass that is underneath.  My plan is to take a razor blade and cut through the layers when I’m ready to plant in May.

This “late to the game” lasagna bed could go one of two ways:

a) It could create an environment that is too “hot” for the plants that will later be put in there, and the plants won’t get any of the nutrients from the process as it breaks down.  So basically, my garden could poop out.

b) It could be awesome and reduce my weeding by a ton.

Only time will tell, but either way, I think the bed looks so much better with the second layer of pavers.

I spent $70 on this project, which is one third of my yearly gardening budget.  If I can afford it, I’d really like to add a third and final layer this fall.  I love the idea of a really deep bed for next year.  It will be perfect for root crops like carrots, beets, and potatoes.  Currently, it’s just too shallow, but tomatoes, bush beans, cucumbers, and herbs seem to love it.

My half-birthday is coming up in April.  I’ll tell Troy about the third layer of pavers then, and by October, they’ll be here!