Before I get off on a tangent and climb up on my soapbox, Happy Earth Day everyone!

And this post is NOT written for people who live in actual dangerous neighborhoods.  I get that fear.

I recently picked up Last Child in the Woods

from my local library and I’ve had a hard time putting it down.

The book is well-written and has wonderful scientific data to back up my personal belief in that we are smothering our kids by keeping them indoors, within an arm’s reach, and therefore “safe”.  Technology, heavily scheduled play dates, and our own fear of the unknown is not doing our children any favors.

Growing up in my town I was considered a free-range kid from about age 7 and on.  Verbally telling my parent’s a loose agenda for the day was considered checking in, and my bike and I were requested home by dark.  A typical summer afternoon schedule would be something similar to the following:

6 or 7 am – wake up and watch Matlock or Law and Order reruns.  I was super cool from an early age!  Eat breakfast.
7:30 am – pick out which pair of awesome leggings or sweatpants I would be wearing that day.
7:31 am – head out to the best toy in the whole neighborhood – the ditch in front of our house!  We lived on a steep hill with wide ditches on either side.  After a rainstorm all neighborhood kids would gather at the ditches.  We would proceed to spend the remainder of most of the day damning the ditch, making boats from sticks, straws, and leaves to race, and generally just getting in to a ton of dirty fun.  Stupid city eventually put pipes underground to act as ditches.  No fun!
After lunch, I would fill up my water bottle, grab my helmet and head out for a long bike ride.  I may have chosen to bike (unsupervised) to a friend’s house a mile away, down to the beach (sans floaties and life jacket), or to a state park about 4 miles away (on a 2 lane road with no shoulders- gasp!!).  A helmet was worn though.

My pink bike was a replacement for my mom’s gorgeous old kelly green racing bike that met its demise when I was hit by a car 3 blocks from home.  Was it the car’s fault?  Yes.  Did we sue?  Nope.  Why?  Cause a) I wasn’t hurt and b) I should have known better and done a better job of watching for cars.  Lessons in personal responsibility come in all forms – including flipping over the hood of  red Toyota Tercel.

My hot pink mountain bike and I were besties.  We went everywhere together, had loads of adventures, and multiple close calls (personal responsibility is one thing…learning to not be a moronic kid is another).  My bike offered me freedom away from my “boring” house, my parents, and my sister who was hell bent on making sure I didn’t live to be 10.  Love you sis!

In the 80’s we didn’t have parental GPS tracking devices for my mom and dad to keep tabs on me.  We didn’t have cell phones, so I couldn’t call my mommy to come pick me up if I rode too far from home and was tired (again, TONS of hills in my area).  I learned to ride within my own limits and then learned that pushing those limits could be so rewarding.  I also learned very quickly that I was going to be away from home all day, I needed to pack my own snacks and water.

A story that comes to mind that would make current helicopter parents gasp: one day after church my sister and I asked my mom if we could walk home.  She said “sure, I love you”, and drove away.  She didn’t ask if we knew the way home or when she could expect us to return.  She said sure and drove away.  That is faith in your kids and also faith in yourself in knowing that as a parent you’ve taught your children to be smart, not accept rides from strangers, and to make somewhat educated decisions.

30 minutes in to the walk we realized two things: we were wearing Sunday School clothes that weren’t made for hiking, and didn’t exactly know the route home.  We eventually made the 5 mile trek in probably 2-3 hours, and had multiple adventures along the way.  That story sticks out in my mind much more than staying indoors and playing computer games (Win Lose or Draw on floppy disc anyone?).

Mr.Frugal by Force also has multiple childhood stories about taking off in the woods at his cousin Scotty’s house and the 2 of them disappearing for hours.  Troy has fond memories and many scars to remember his childhood.

So, why do my crazy childhood adventures and verbal diarrhea matter?  To some people reading this, they don’t and that is ok.  But I suspect a lot of parents out there long to give their children the childhood they had, but don’t out of fear.  To that I say, stuff that fear in a sack missy (or mister)!  Look up crime statistics for your area.  I’ll wait…ok, you’re back.  What did you find?  For most people I’m guessing they found that violent crime has actually dropped in their area since they were kids.  Hmmm, ok then what has changed to prevent you from letting you kid roam freely?  A few guesses on my part:

1) fear is a powerful motivator
Fear of the unknown lurks within all of us.  There is a really tall slide at a park near our house.  Jack is obsessed with it.  I’ve always climbed the stairs behind him, made him wait at the top while I adjusted myself, put him on my lap and slid down with him.

Two weeks ago we were at the park.  When he said “no no mommy, Jackie do it”, my heart was in my throat.  Did I want my 2 year old going down a probably 12 foot slide without my protective arms around him?  No!  Did I want him growing up thinking he always needed me to be there to try anything new?  No!  So, with great angst I let him do it. 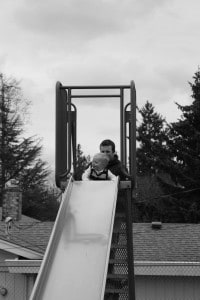 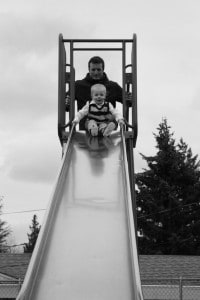 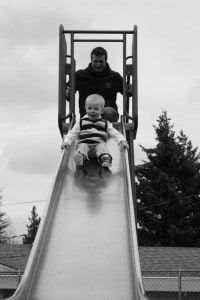 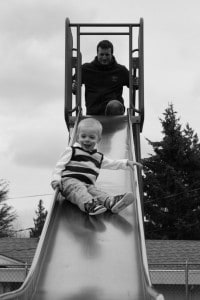 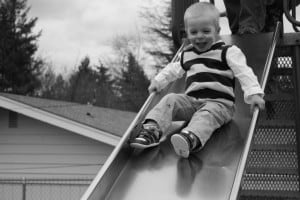 When he landed at the bottom with an enormous smile on his face he looked at me and said “mommy, JACKIE did it”, and I knew I had made the right choice.  While I don’t want him to fall and break his arm, I also never want him to ask me to call his college advisor to figure out what classes he should take the following quarter.  Jackie did it is something I want to encourage and nurture.

Now that I am a mother, I realize that my parents weren’t just sitting at home enjoying the quiet time while I was out and about on my own.  They were likely worrying and had concerns about my safety.  And also enjoying the quiet time…I was a talkative little bugger!  They probably were tempted to hop in the car a few times and drive by my normal haunts to see if I was being lured in to a van with some candy and a puppy.

2) too much damn information!
So with the evidence that crime is down in most places, why do we think that a kidnapper is lurking behind every bush waiting to snatch our kids?  Because the news and the internet do a wonderful job of scaring the shit out of us.  Childhood abductions remain around the same numbers as 20 years ago, but with a 24 hour news channel and oh so obnoxious people like Nancy Grace being all up in our faces all the time, we get the feeling that kids are stolen from their own homes at a rate of 15 a minute.

3) the idea that kids need structure, rules, and a rigid extracurricular schedule as soon as the diapers come off.
Not providing in-utero Mandarin lessons to your developing fetus means they will NEVER get in to a good pre-school.  And you may as well sign them up for a life of fast food if they don’t get in to a good preschool.

Growing up I played soccer, softball, basketball, and so much more, but I did it because I WANTED to.  Choosing my activities because they interested me never made it seem like a chore.  I had enough time to get damn good grades and still go be a kid.

Kids need direction, yes.  They need well-defined boundaries so that they grow up to be good members of our society and not the Unibomber.  They also need freedom and independence to nurture creative play.  They need a ditch, some sticks, and some mud.  They need to be outside in the sun, rain, and snow to know that life is much bigger than Facebook and the Disney Channel.

As soon as we are settled in our new place, I’m cruising freecycle and craiglist for mountain bikes and a kid bike carrier. We already have helmets for all 3 of us. Jack will be outside and he will get to experience nature and my version of childhood. I want that for him, and I’m committed to allowing him to be a child and not a home bound Nintendo-playing little person.

My responsibility as a parent is to help nurture him and teach him right from wrong. HIS job as a child is to make his own mistakes and learn from them. Hopefully we’ll do a good enough job in teaching him right and wrong that he will make smart and safe decisions.

Eventually that child carrier will come off the bike and I’ll give him a kiss and tell him I love him and to be home before it is dark.