So, here is a truth about my sister and I. We hate “stuff”. We don’t do knick knacks, or cutesy things in our house(s).  Clutter needs to die.  Crap underfoot drives us crazy.  My friends joke that my house usually looks like the “after” version of the show Hoarders.  I’ll live in a place for at least a year before hanging photos on the wall because I just don’t want extra junk around.

For you see, we are the spawn of people who have a lot of “stuff”.  It’s not that my parents love stuff, it’s just that they’re horrible about editing what they bring in to the house, and what goes out.  I think it’s their gimpiness; it’s harder for them to get around and organize.

We try and intervene, but the piles return, and seem to triple.  Once, when my parent’s went on vacation, I flew up from Los Angeles, and my sister and I spent an entire weekend going through their house (the one Troy, Jack, and I live in now) and throwing about 50% of their stuff away.  My (now) brother-in-law helped us load the truck (cause he had one), and drove it to the dump; all under protest.  He kept saying “this is so wrong.  Please don’t let them know I was a part of it”.

We so ratted on him the second they came home.  Cause we’re nice like that.

So, it was an eye-opening experience when I came home the other day to this.

Sigh, just looking at it makes me twitch a little.

This is the table that is in our foyer.  We come through the garage, but somehow, all the stuff gets dumped upstairs on, and around this table.  It’s a magnet for crud.  And it makes my eyes bleed.

I had clutter fever, and the only prescription was more organization.  You might remember my love of organization from this post.  Walking into the Container Store or an office supply store gives me a chick boner.

I filled my prescription to cure clutter fever at a Goodwill this weekend.  I walked around the corner and found a hideous little wooden beast.  It was kitschy, tacky, and I knew instantly it must be mine.  The price tag of $12.99 was right up my alley.  The top was hideous (almost like a countertop laminate, but shiny.  Fugly), but neither Troy nor I have enough time right now, or say in the next 5 years, to refinish it to my liking.  I resolved myself to the fug, paid for the item, and headed off to the fabric store.

The previous weekend I had been at Joann’s, and a woman was buying a fabric that I fell deeply in love with.  I had no need to buy it at the time but knew that someday it would find a place in my life.  Luckily, this opportunity presented itself a mere 7 days later.

While Troy unloaded the fugly cabinet from the truck, I quickly sewed a table runner to use as a bandaid until some day in a magical world where unicorns poop glitter and my family has enough time to recover this cabinet. 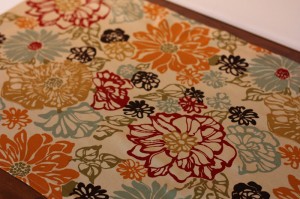 Since I was declaring a “no stuff on top of this thing” rule, I wanted something in addition to the table runner for decoration.  I remembered a cool milk bottle I had purchased at Goodwill last year that was hanging in my garage just waiting for a purpose in life.  While still in the garage, my eyes quickly fell on some peacock feathers that “Boy Boy” (named by Jack), our neighborhood peacock had molted on to our deck.

Within about 5 minutes, my entryway became a well-organized place that didn’t make me want to punch a nun every time I saw it. 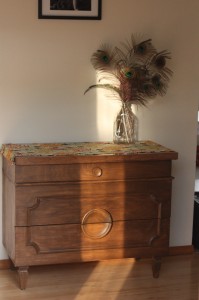 Ahhhh.  Peaceful.  Next stop, the garage.  Any room that houses both antique milk bottles and feathers from a peacock’s ass might need some tidying up…