originally posted on July 24, 2017; Updated on May 10, 2018
Key lime creme brulee is a fresh take on an old classic. Pair with homemade graham crackers, and you have a refreshing custardy dessert.
5 from 1 rating
1 hour 10 minutes
Jump to Recipe 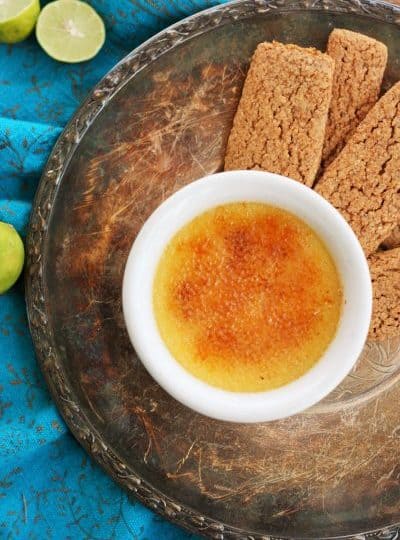 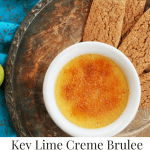 Key lime creme brulee is a fresh take on an old classic. Pair with homemade graham crackers, and you have a refreshing custardy dessert. 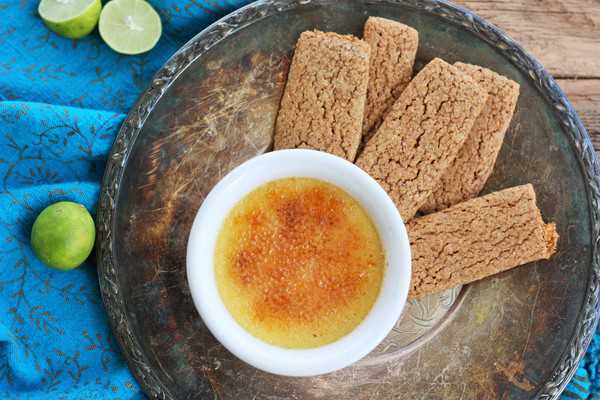 Troy and I were never supposed to get married.

In fact, I was actually engaged to someone else a long, long time ago.

But before I tell you that story, I need to tell you this story first.

Troy was friends with my older sister’s friend. I met him when I was 17 and we all went mini golfing. I got out of my sister’s car and noticed this hunk of a dude stepping out of a broke ass El Camino. I whispered to my sister “who is that”? Her response was “that’s Troy. Don’t even think about it”. I mean the car alone was enough to make me want to know more about him. My sister later laughingly told me they called it Panty Dropper. It was that freaking ugly. I seem to remember it even having a canopy. And it was brown. Turd brown.

There was some minor flirting that night, but not much. After all, I was almost five years younger than him, and my dad is 6 foot 8. 🙂 We pretty much didn’t see each other for another three(ish) years.

During that time, I dated some people and so did Troy. After a year at college, I started dating the friend of my high school best friend. Things progressed quickly, and we became engaged. I had grown up never wanting to get married, but we were young and it seemed like what everyone else was doing. He was a very nice guy, but we were very wrong for each other. Breaking our engagement was the hardest and easiest thing I have ever done. I knew we shouldn’t get married because we would make each other miserable. But hurting someone like that is the worst feeling in the world. We may have been young, but we had to be mature enough to realize that this was not a sustainable arrangement.

Sometime after I called it off, it made it through grapevine (my sister told me) that Troy was interested in me. I barely knew him, but I was certain there was something there. During this time, I had just finished up a legislative internship with the Washington State House of Representatives. When the two chambers were in session late at night, the teenage pages weren’t allowed to stay to help pass out paperwork and run errands. I always stayed after to help, and had gotten to know a few of the Representatives. On the last day of the session, I passed out my resume with that night’s amendments to many of the members that I had enjoyed working with.

One day, I got a call from one of those members asking if I was interested in running his campaign for the fall. By this time, my ex and I had broken up, and I found myself thinking about Troy more and more. If I didn’t take the campaign job, I would be going back to WSU in August. Being six hours away from this person I was interested in  – especially a person whose car didn’t seem like it could even handle an aggressive car wash – didn’t seem like a set up for success. But I barely knew him and had never even spoken to him on the phone. So I did what any sane person did. I wrote “campaign” on one piece of paper and “college” on the other. I threw them in the middle of the living room and called my dog in from the basement. She sniffled one of the pieces of paper, I opened it and it said “campaign”.

So I had to go see about a boy.

I called him, we talked and went on a few movie dates. And then just when it seemed like there may be something to this relationship, he left for two months to go shoot a movie in Montana. I’ll never forget a few weeks after he left getting a note in my apartment’s mailbox saying I needed to come down to the post office to pick up an item. Troy had sent me a post card but didn’t put enough postage on it. So, not only did I need to drive to the post office to get it, I had to pay to get my post card. The postal employee handed me a post card in the shape of Montana with a big horn (is it horned?) sheep on it. Troy had written “I wish you were here” and drew an arrow to the sheep’s butt.

And just like that, I knew this man was for me.

We were a permanent thing once he returned from filming the movie. I don’t 100% remember the how long we had been together when he proposed. He got all our friends and family together at a local playhouse, and he and his friends put on a show for my birthday. His cousin Scott dressed up like James Lipton from Inside the Actor’s Studio (there was a wig and everything. He looked amazing), and interviewed Troy on “Inside the Sarah Studio”. They did a live interview on stage, and “James” would ask him questions about me and our relationship. There were “flashback” clips of when we first met, the first I love you and the first kiss. Sounds sweet right…?

In the flashback clips, Troy was played by his cousin, and I was played by his best friend who is probably 6 ft 4, has a beard and used to be a boxer. They somehow found a shirt I used to wear when I WAS SIX and his friend wore that as a belly shirt along with a blonde wig. It was pretty epic, and my cheeks hurt from laughing so hard. When all the clips and interviews were done, “James” asked Troy what he would say to me if I was there that day. At that point, Troy started reading something sweet and lovely and I don’t remember any of it and proposed. I said yes. 🙂

Troy’s mom wheeled out a cake that said congratulations on it. I asked what would have happened if I said no. Troy’s sister told me she would have punched me in the face and slammed me into the cake. So at least they had a solid back up option!

We got married on a friend’s farm the next July on what was the hottest day of the year. It was 104 degrees, and the wedding was outside. It was like getting married in a sauna. We stayed in a hotel by the airport that night and spent the next day going to the movies and restaurants before our red eye to the East Coast. Originally, we had planned to go to NYC so we could see a taping of the Daily Show. Jon Stewart and I totally had a side thing going on at the time. But the week of our honeymoon was the Democratic convention and they were out of state on location. So, we went somewhere super cheap – Key West, FL. I found the most amazing two bedrooms, two bathroom timeshare for a crazy low price. Turns out that during hurricane season, there are amazing discounts on lodging. We walked around, tried to breathe in the heat/humidity (how do you people do it?), and ate an epic amount of key lime pie at The Blonde Giraffe. We parasailed, went sightseeing, and did a dolphin watching/snorkeling trip. The snorkeling part ended up getting canceled because of a crazy storm that seemed to be getting stronger the longer we were out on the water.

In a movie, that is called foreshadowing.

Turns out that was the start of Hurricane Charley and six weeks of a horrible hurricane season for Florida.

Long story short, we were delayed at every turn, had horrible air travel experiences, and somehow made it home a day after we were supposed to, and without our luggage. I did manage to talk us into first class during one of the legs of the trip. But we also had fond memories of the trip, and especially the key lime pie. Knowing we couldn’t afford to take a return trip for a very long time, I decided that each year on our anniversary, I’d make a key lime pie.

Today is our 13th anniversary. It seems like the blink of an eye and an eternity at all once. We’ve had hard days, weeks, months, and even years. Marriage is not easy, no matter how much you love each other. We’ve faced health issues, deaths, moves, unemployment, and two births together. Through it all, there has been tears, laughter, stress, and joy. And key lime pie.

This year, to change it up, I decided to do a key lime creme brulee. Finding my um, “lost” kitchen torch during my cabinet clean out inspired me to caramelize the hell out of some sugar. If you follow me on Facebook, you may remember a question I posed to the group a few months ago about the best part of key lime pie – was it the custard or the crust? There was no formal consensus, with about half the group preferring crust, and half wanting custard. For these Key Lime Pie Creme Brulees, I made homemade graham cracker spoons. So now you don’t have to choose. 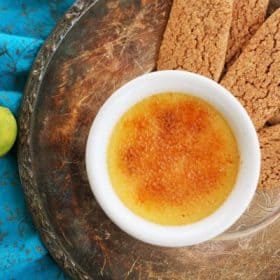 This recipe is my go to for homemade graham crackers. This is based on a lemon creme brulee recipe I have had for over 17 years. I don't know the origin of it and thus can't give proper credit to the original author of it. I always use fresh key limes because I like the taste, but they do sell bottled key lime juice. If you plan to juice your own, keep in mind they're hard little buggers. I use this hand juicer and it works well.
Nutrition Facts
Key Lime Creme Brulee With Graham Cracker Spoons
Amount Per Serving
Calories 391
* Percent Daily Values are based on a 2000 calorie diet. 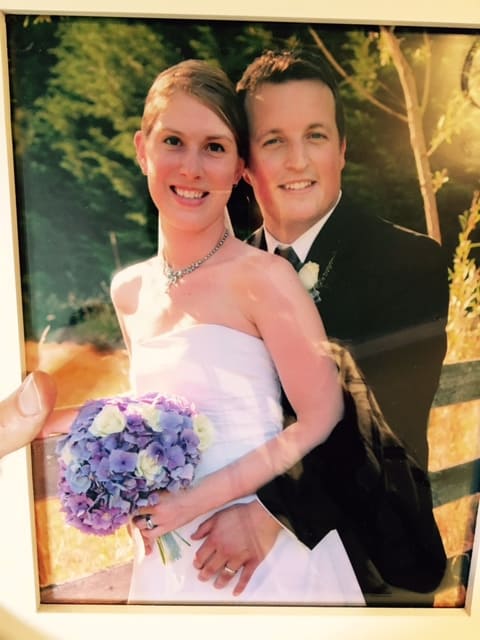 Happy 13th Anniversary to my ride or die.

This post contains affiliate links and we may earn a commission at no additional cost to you if you click through and make a purchase. This allows me to continue to provide free content, and I only share products that I use and love myself.