First Time Visiting? Start Here!
Home » May This Be the Last Time

May This Be the Last Time

Hopefully with today’s surgery, this little chicken will never again snore so hard that he literally foams at the mouth.  Ahem.  Good gravy. 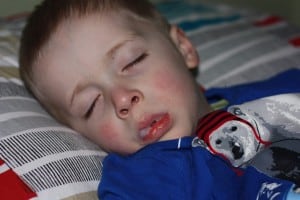 Surgery at 8 am.  Hope to be able to update in the afternoon!

Thanks for the well wishes and prayers!  True to form, he was a charmer to the staff and nurses prior to surgery.  They gave him something to relax him, and it was pretty funny to see a calm and loopy Jack.  He almost fell off the bed before they wheeled him back.

Surgery took less than 40 minutes, and the doctor reported that everything went well.  The adenoids were removed as well because he said they got in there and they were even bigger than his giant tonsils!

He was coming out when we were able to go back.  He was fighting the two nurses like a pissed off badger.  At one point, one of them yelled to me “geez, he is STRONG”.  I always told Troy that my womb was black and blue from his activity while pregnant, and he has been a fighter ever since.

We knew he was feeling better when they took his IV out and put a Cars bandaid over the insertion area.  I knew the name of one of the cars on the bandaid, but not the other.  He mumbled the correct name, and then asked me to read him a book.  He also asked to open his presents that were waiting for him at home (two of my coworkers totally spoiled him rotten).  The nurse asked him if his throat hurt and he said “oh man yes”!

We’re home now and he is being a little rockstar.  We pulled out the hide-a-bed from the couch, Troy turned the TV cabinet, so we’re just lounging, snacking, and snuggling.  He has wanted juice, yogurt, popsicles, and in an ode to his future mother-in-law Elaina, he requested nachos for lunch.

Speaking of his future mother-in-law, Elaina and her family sent him a snow cone machine.  He lost his marbles with excitement when he opened it.  My friend Anne (one of his godmothers) sent him a baby for his stuffed kitty GG (who had her own wristband at the surgery center), a Batman boat, and a movie to watch while recovering.  Spoiled little nugget.

And before you have to ask, yes, Troy was a bit of a wreck for the whole thing.  He has rallied and is recovering nicely with Jack.

17 comments on “May This Be the Last Time”