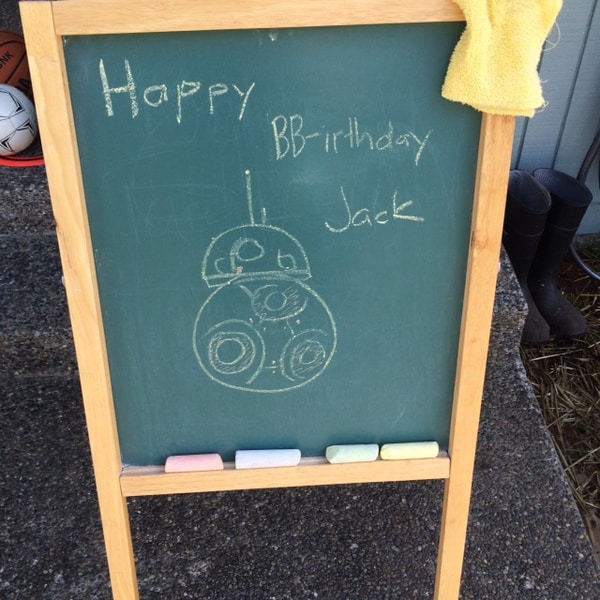 You know when you plan something and it’s so, so, so big and you wait forever and then it gets even bigger in your mind (TWSS BTW)?  That is where we’ve been for the last year. A YEAR!

Last year around this time, we started planning a trip to Los Angeles to see one of my besties, Elaina. You may remember Elaina as the random internet stranger I met in person in 2008, and she later got a homemade quilt for her birthday. Also, our oldest kids are promised to each other for eventual marriage. With that trip comes the opportunity to take the boys to Disneyland for the first time that Jack will be able to remember.  He has been to the Mouse’s House plenty of times; a bunch in my belly, and another time when he was 15 months old. When we lived in LA, Troy was a contract employee for Disneyland’s film department.  We therefore had free season tickets and guest passes for friends. It used to be, “I’,m bored.  Let’s go to Disneyland and walk around”.  Jack has been asking to go for years, but our crappy schedules and lack of disposable income prevented such a trip.

This time however, we were able to do it right.  I took on a three month project at work that was above my normal work, and that extra money paid for our plane tickets during a sweet fare sale in spring 2015.  We’re able to stay with friends, so thankfully lodging is free.  Troy took on extra work to buy the park tickets (it hurts to pay the exorbitant prices when we used to get in for free!), and I’ve been squirreling away cash every pay period for the rental car, food, and incidentals.  A friend of a friend later offered to get Troy and I in to Disney for free, so we’re saving a ton there, and the money we saved will go towards the rental car.

Well the fun part of the planning was that Jack didn’t know.  My preference would be to pack Jack’s suitcase and tell him when we’re at the airport, because holy crap that kid is a planner (I know, pot, this is kettle.  You’re black), but obsesses about things and talks about them until I want to stab myself in the ear.  The idea of having to listen to him talk about going to Disneyland for the last year is my version of hell.  Troy however, wanted to tell Jack months ago.  We compromised, and decided to tell him at his birthday party.  He’d get the chance to get excited, and I will only have to deal with hearing about it for four weeks.

We gave Jack a small gift on his actual birthday, and told him a “big” present could be opened at his party.  His guess was “legos and a chapter book”.  I love that nerd.  We put Troy’s phone in a box, and Elaina and her family used Facetime to call the phone, so Jack “opened” them. They shared the exciting news with him, and I filmed it.

This year, Jack decided that he wanted to help make the pizzas we always serve at his birthday party.  We make them ahead of time and freeze them (unbaked) and then just throw them on our cast iron pizza pans 30 minutes before the party starts.  They’re always a winner.  Jack made designs on the pizzas, so while the toppings weren’t spread exactly evenly, the smiley faces made from pepperoni and Canadian bacon were fun.  Bennett supervised in his bright pink Voodoo Donuts onesie.  The magic is in the hole you know. 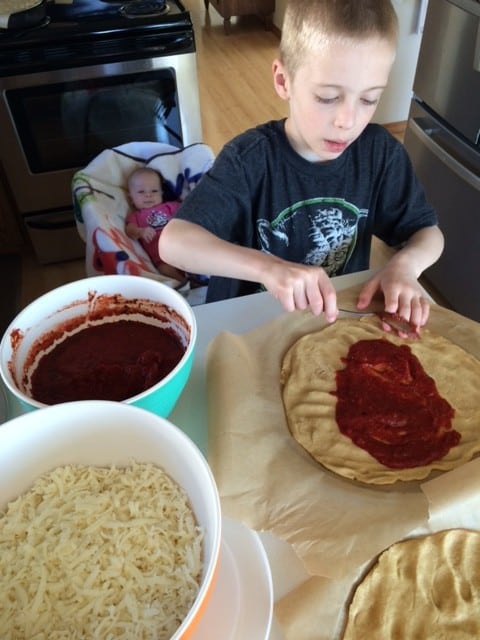 And then, like a smart kid, he decided he wanted to help make his cake and the frosting.  The cooks get to lick the beater! 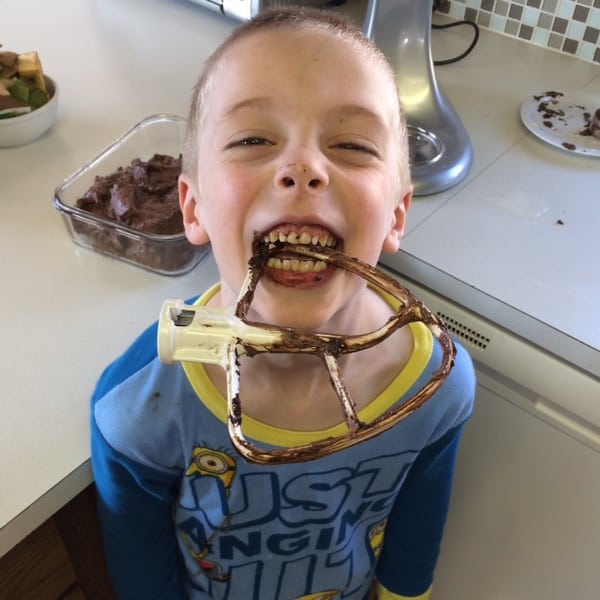 We made a strawberry cream cheese filling to go between the two cake layers.  I used way too much strawberry puree, and the frosting was a wee bit runny…just a wee bit. 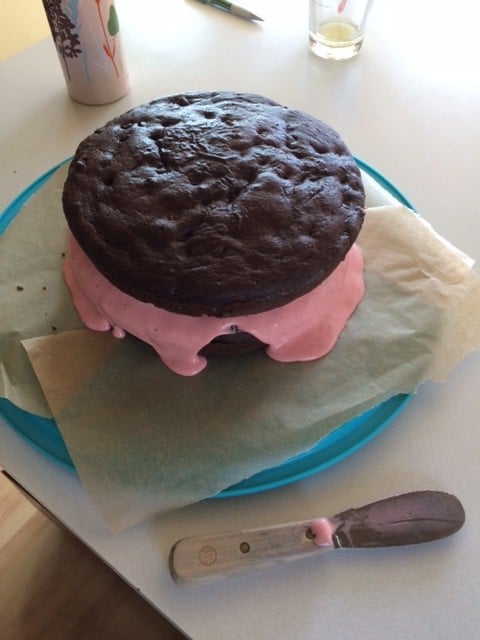 Yikes!  I tried to fix it, but it was unfixable.  The party theme was Star Wars, so I suggested to Jack that we simply leave the bottom layer of the cake as is, and say it is the scene from Episode III when Anakin is in the lava.  No dice, so I scraped as much as I could from the sides, “spackled” the sides with homemade fudgey frosting, and threw the whole thing in the fridge and prayed it would stay together. 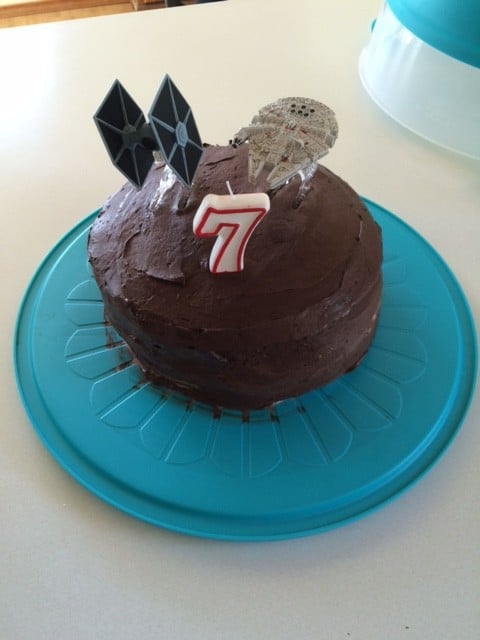 A big shout out to the creator of our video baby monitor, Infant Optics.  While Bennett doesn’t sleep like the peaceful little angel in the photo on Amazon, I am a huge fan of this monitor.  Some times we bump the camera or something and get out to the living room and realize we can’t see him in the handheld.  Well the handheld allows you to move the camera around with the push of a button.  On Friday, my mother-in-law came over for a few hours to watch Bennett so Troy and I could get a ton of crap done outside (moving and leveling a garden shed, moving the entire wood pile, etc.), and at one point we realized they were in Bennett’s room.  I wanted to know if he was asleep, so I just used the monitor to scan the room, and voila, saw them snoozing in the chair.  My mother-in-law later declared she has a long career ahead of her in being a “baby mattress”.  🙂

But…more than anything, this monitor is durable.  How durable?  I accidentally dropped it off the second story deck railing on to the concrete driveway while hanging laundry to dry on the deck, and the corner of the monitor got the teeniest little ding in it. Still works perfectly.  Took a lickin and kept on tickin. 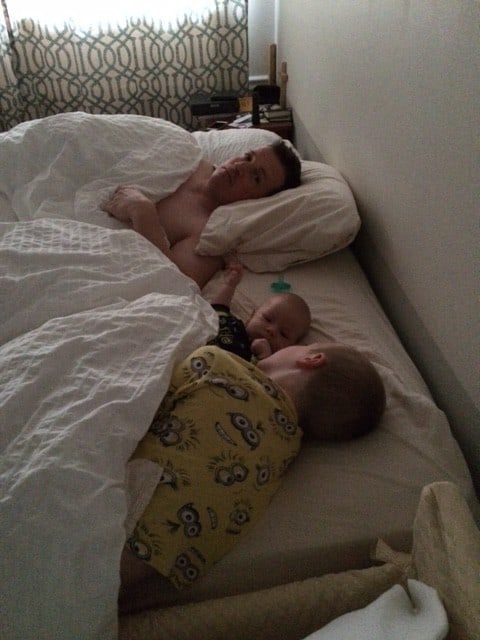 Monday:: Whoops, nope that will have to be next week.  We’re having dinner for my father-in-law’s birthday!

Tuesday:: I’m going in to work in the afternoon for a meeting, Troy, Jack, and Bennet have Jack’s baseball game, so they need something fast.  They’ll heat up one of the uncooked freezer pizzas and serve it with leftover veggies from the party.

Saturday:: Fend for yourself/clean out the fridge