Let’s get one thing straight my friends.

I wrote this post late on Saturday night after taking a sleeping pill for the first time in a month.

I’ve been sleeping like CRAP for the last two weeks, and I finally cried uncle tonight and took something.  So, by the end of this post, I might just be typing lyrics to a Nickleback song. Because truly, only one hopped up on something would want to have anything to do with Nickleback.

Here’s what I learned this week.

I was following this guy the other day, and snapped a photo to send to Troy while I was at a red light.  Troy’s response “job security”.  Troy is an EMT. 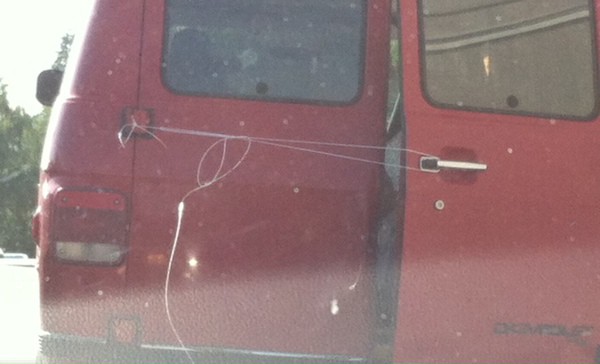 After a few weeks of a mixed up schedule, I finally got out in the garden and it was glorious.  I had so much weeding and tidying to do.  I cleaned out two of our raised beds, and got the cabbage and brussels sprouts all planted.  Fingers crossed this is the year I can actually grow them to harvest, because I previous years I’ve totally screwed the pooch on those two crops.  Balls.

Our fall raspberries are ready, almost three weeks early.  They’re always HUGE compared to the summer crop, but these ones seem even larger than normal.  They’re so big, I can barely fit two of them in my mouth (that’s what she said.  You know I was setting myself up for that, right?).

Also, some of them randomly look like butts which makes me happy.  By the way, I’m 12. 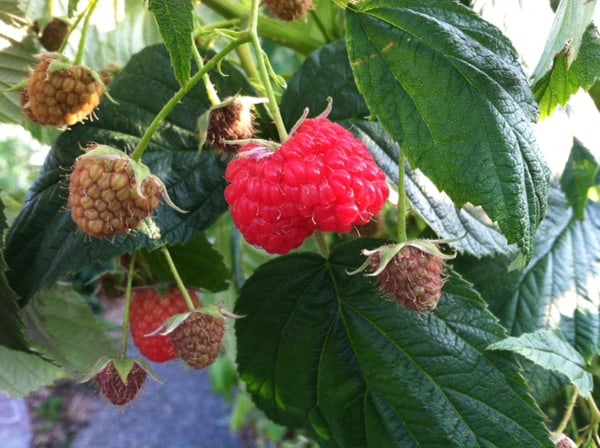 We’re headed to Ocean Shores today (my in-laws have a cottage down there) with some friends and their son.  Jack is completely obsessed with their two year old, to the point where I would consider him a stalker.  Jack asked if they could sleep in the same room so that Jack could “watch him sleep”.  Freak.

When we get back, I’m going on another clean eating cleanse (three weeks of being at my parent’s daily with their unlimited supply of peanut M&M’s has taken its toll my friends), but until then, I’m planning a steady diet of salt water taffy (I eat it until my jaw and sinuses scream) and s’mores.  Life is good friends, life is good.

When we’re not busy with s’mores and taffy, we are planning a few actual meals with actual ingredients.  Each family will be making one dinner, one lunch, and one breakfast.  Then we’ll go out for one dinner and one lunch, and fend for ourselves for other breakfasts and lunches.

Tuesday:: Our friends are making hobo packets on the grill or campfire.

Wednesday:: Bruschetta, spicy Asian green beans (once I realize what I put in them last week that make them so damn tasty, I’ll share a recipe), and fruit.

Thursday:: My in-laws are coming over to our house for Jack’s final karate lesson.  I’ll make pizza, green beans (seriously, can’t get enough of them) and fruit.

Sunday:: We’ll be at my parent’s for family dinner.

This week I spent more money than normal, since marshmallows and chocolate are crazy expensive.  I spent $21.05 at Trader Joes, $38.79 at Costco, $14 at the local fruit stand, and $51 at the regular grocery store.