T.S. Eliot said that April was the cruelest month, but my family has consistently found that August is the month that sucks the hardest. Since the dawn of time (or really like 2011 ish), my parents have consistently had something happen with their health that makes them go tits up for weeks at a time. August always stresses my sister and myself out hard-core.

Last year, you may remember this incident that left me administering hardcore antibiotics to my dad in an IV for over a month, assisting my mom in the morning and evenings, and trying to work from home to not use up sick leave because I was pregnant and hoping to use that time for potential maternity leave.

My dad had his shoulder replaced in July of this year (see that August, we TRICKED YOU by being on the offense instead of the defense), and I (along with my sis helping) have been doing more heavy lifting assisting my parents with their day-to-day stuff. With only a week left in August, I thought “hey, we finally beat the August curse”, and then of course I was shown why gleeful naivete is dangerous. Friday afternoon, I came home from picking up Jack from YMCA basketball camp (which side note, has a surprising lack of actual basketball being played), and my mom was like “my side hurts and I can’t pee”. ER trip and some meds later, and mom is being watched and monitored (those seem like the same thing, but I’m going to go ahead and classify them as separate things) until further notice.

We were just five short days away from the end of August when it all happened.  My sis and I are staring new hashtags: #fuckyouaugust and #augustisadouche.

A few months ago, our neighbor who lives above us (when you live on a steep hill, neighbors are classified as “above”, “below”, and “across”) starting acting a bit strangely. He has been renting the house for a little over a year, and has always seemed super nice and helpful. One afternoon while working in the garden, I heard him yelling “stop that Jack, knock it off”. Knowing Jack was inside reading, I thought it was strange, but guessed maybe he had come out on the front porch and was making faces or something. Another day, I heard him say “calm down Jack, stop”, which seemed to make sense to me because my kid be crazy. I am also fully on board with the whole “neighbors and relatives disciplining other people’s kids”, because at what point did we all collectively decided as a society that calling a little shit out on his behavior would damage his self-esteem? Calm the eff down people; if a stranger or neighbor is telling your kid not to do something, they probably shouldn’t be doing it.

Anyhoo, he was yelling at Jack to calm down, but once again, I couldn’t see Jack. I thought the neighbor might be starting to crack up, but he was still friendly, so I let it go.  Then, one afternoon I was outside carrying 40 lb bags of chicken food, and doing a lot of heavy lifting and physical work in the garden. From the house above me, I hear “come on Sarah, you’re way too old for that”.

Oh hell no, that douche must be stopped.

The next day, our neighbor was walking up the hill with two dogs I had never seen before. He stopped to talk to me in the garden to let me know he was back together with his ex-wife, they were getting remarried, and these were the dogs they had owned together, Jack their puppy and Sarah their older dog. We had a great laugh about that, and from time to time I find myself being scolded for being too noisy, or sniffing stranger’s butts (I’ve only done like that four times, so NBD), and Jack is constantly hearing “down, stop, and stop chasing that bunny”. Which honestly is just good advice, and hopefully something my own kid will take to heart.

Bottom line, we should allow others to help keep our kids in check. But don’t freak out if someone tells you that you are too old for something, until you understand the whole story. And shake hands instead of putting your nose in someone’s crotch. Or whatever. Do what you want.

I forgot to tell you all we had a chicken pass away over a month ago! I saw them all dust bathing (chickens like to dig chicken belly shaped divots in dirt and hunker down in it to smother all the mites and bugs that live in their feathers), and thought “that one is really getting in to it and trying a new yoga pose or something”. Jack went out to get the eggs that evening and came back and said “I have good news and bad news. Good news is, we got eight eggs, and the bad news is, I think one of the chickens is dead”. We had eight chickens as of that morning, so at least she was kind enough to lay an egg before passing.

Troy went out to gather her up in a shroud, and I then informed him that the county doesn’t want livestock/animals that died of unknown causes to be buried, so we’d have to put her in the garbage. Jack heard this and got so sad. I’m usually quite matter of fact with Jack about death and such things, but Troy would rather eat a live coal than to make his kids upset in any way. He told Jack that there was a garbage man at the dump who would get her and bury her in a special place and put a cross over her grave. As he was describing this he was making a cross shape using his hands. The look on his face was just so earnest, and Jack was enthralled and asking questions. Somehow, Troy started demonstrating something with his arms that was supposed to represent chicken wings, and I just couldn’t handle it anymore and starting laughing so hard. Troy looked at me like I was insane, and trying to hold the laughter in just made me choke, and gasp, and Jack came and gave me a big hug because he thought I was crying. I’m not sure what was wrong with me, but even now, retelling the story makes me laugh. Egg Shen, we’ll miss you. You were a great chicken, and your life brought us joy. I’m sorry your death made me silly and giggly.

A dear friend of mine is encouraging her son’s reading and writing by pairing him up as Jack’s pen pal. He sent Jack an awesome picture last week, and inside was a great magnet she had found along with a note that said “thought of you”. 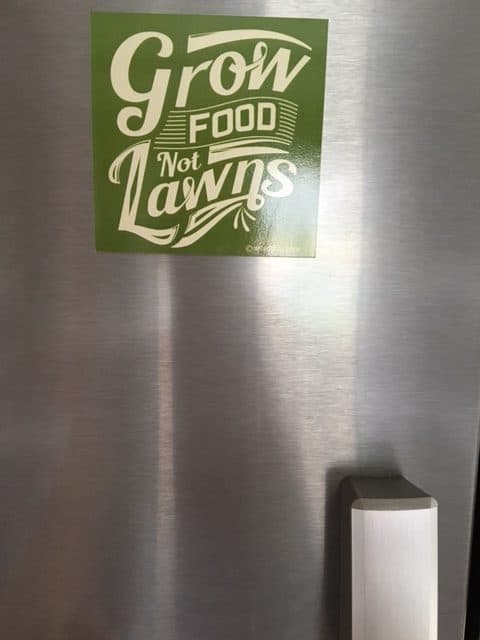 Of course, I love it, and hung it on the fridge right away. The brand is We Add Up, and they appear to be passionate and crunchy, and basically I think I need one of everything. Bonus points to them, because my magnet was made in the US. This is the point of reading the post where my mother-in-law shows the computer to my father-in-law, because he has a gorgeous lawn. It truly is a work of art. But, it’s not for me, and he and I are ok with our difference of opinions with lawns. My kid plays on his, and he eats pickles, tomatoes, and eggs that come from my yard. Then I make an inappropriate joke, he laughs, and I realize how lucky I am to have them as my in-laws. 🙂

What could inspire such rapt joy and focus? 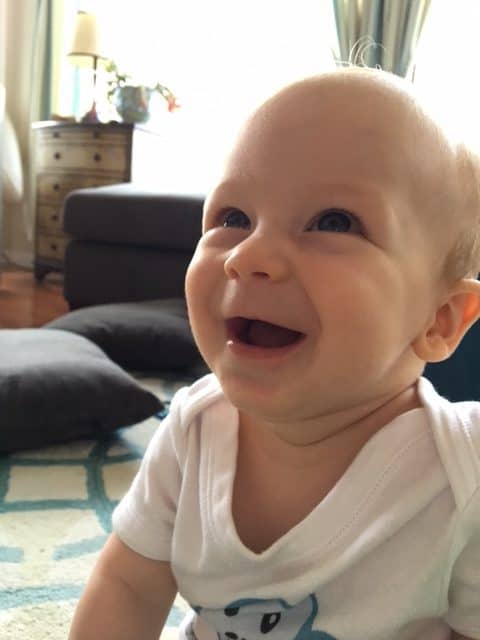 Why watching his favorite person in the world eat a banana of course. 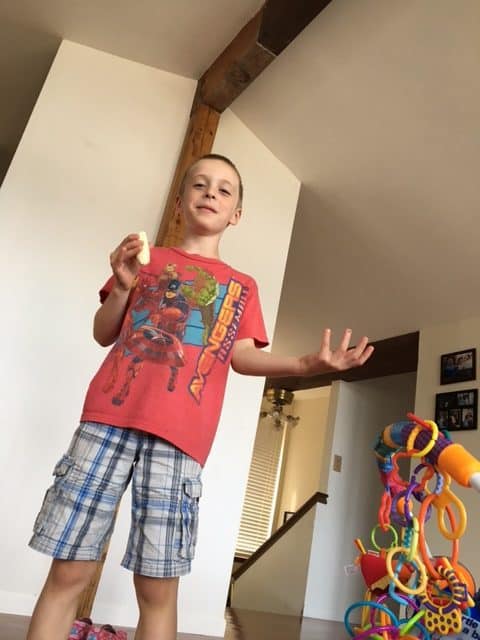 Why is my couch pulled apart in multiple pieces at 9:30 on a Saturday night? 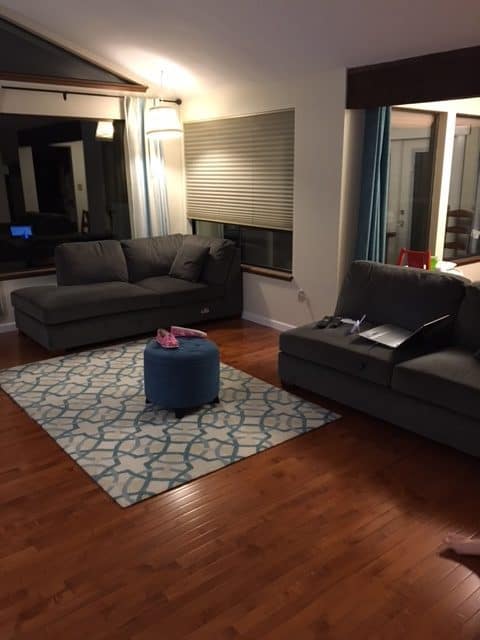 Troy, spider hunter was looking for the mammoth death walker that ran across the floor with a machete in its hand and hate in his heart.

Green beans are insane right now, and I canned eight pints the other night in my pressure canner. I just did a raw pack with some salt and we’ll see how that turns out. I cannot keep up with what the garden is cranking out, and am tempted to tell this small group of walkers (they like to walk in the evening, not like zombies.  Just incase you needed that clarified) that come up our hill around dinner that they can pick as much as they want in one evening. 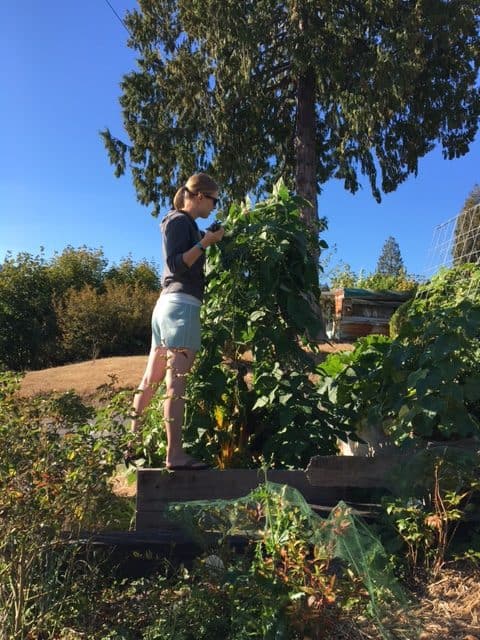 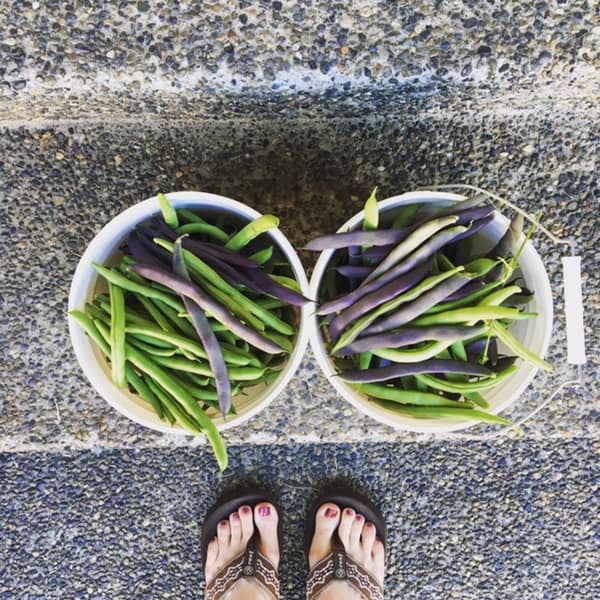 And this has been happening all week in my house 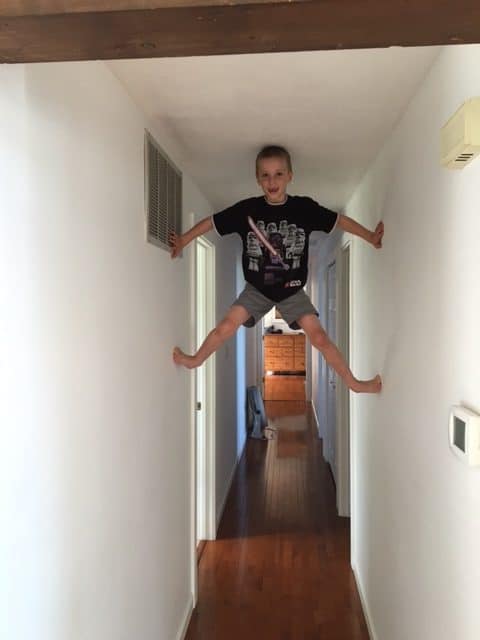 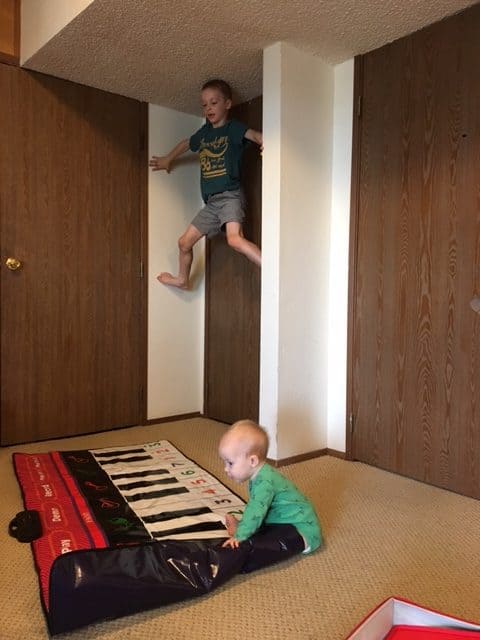 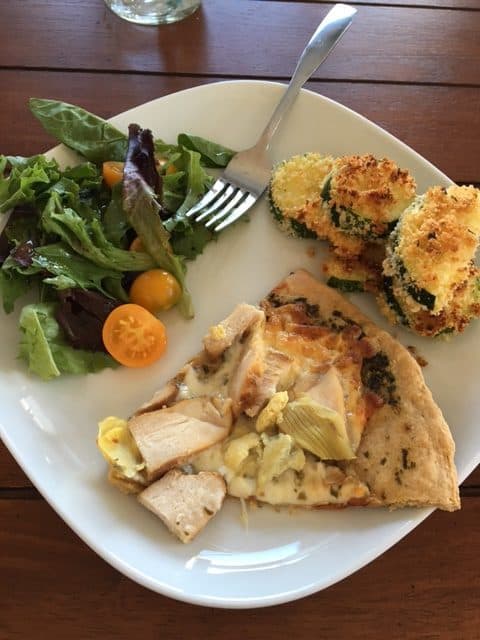 As for this week, we’re having:

One comment on “Meal plan for August 29th – September 4th”