This week was an overabundance of garden and “urban gleaning” goodness! This time of year is an embarrassment of riches, and I’m thankful for every delicious bite. I stand by my claim that the Pacific Northwest is one of the tastiest regions in the US. 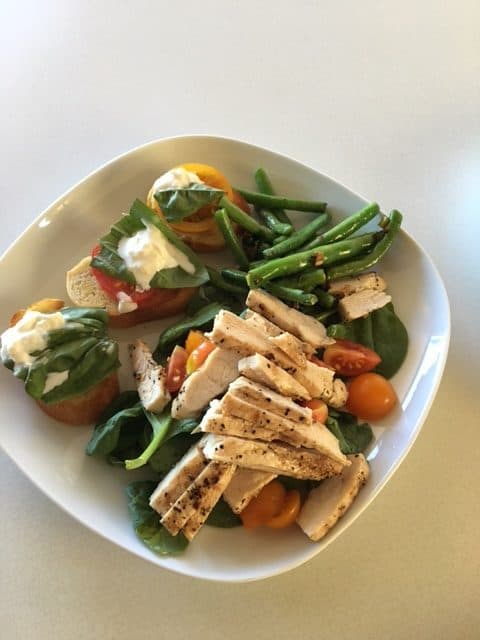 My favorite dinner from this week! 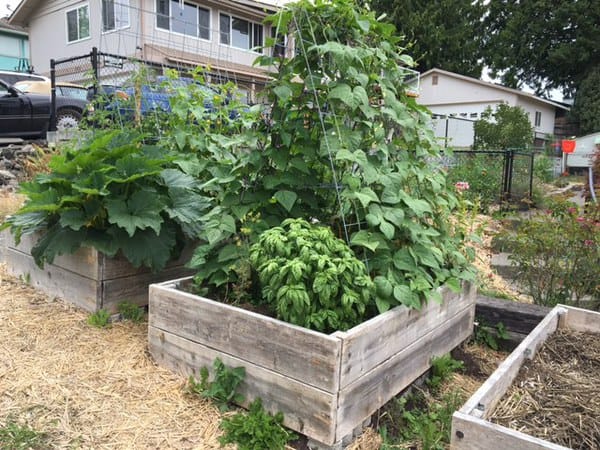 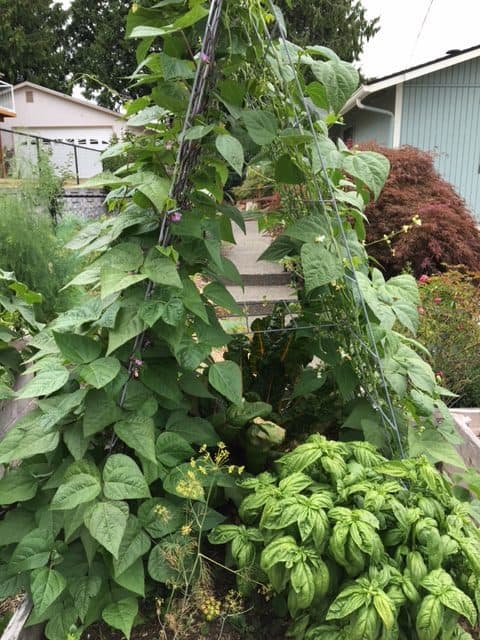 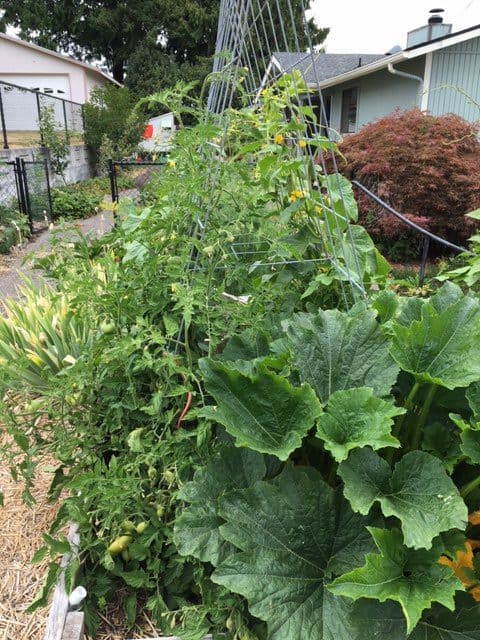 Cukes, zukes, and cilantro hiding from the sun in-between the cuke tent

I made my first batch of fridge pickles on Tuesday.  I accidentally delayed picking some cucumbers, and ended up with larger cukes than we prefer for pickles.  The chickens got a handful of them, and the rest became spears.  The recipe I use makes about 4 quarts worth of brine, so when I don’t have enough cucumbers to make a full batch, I save the brine in the fridge, and add cukes as needed. The pickles are delicious, but Troy always gags when I’m making the brine.  Which frankly is a plus in my book. 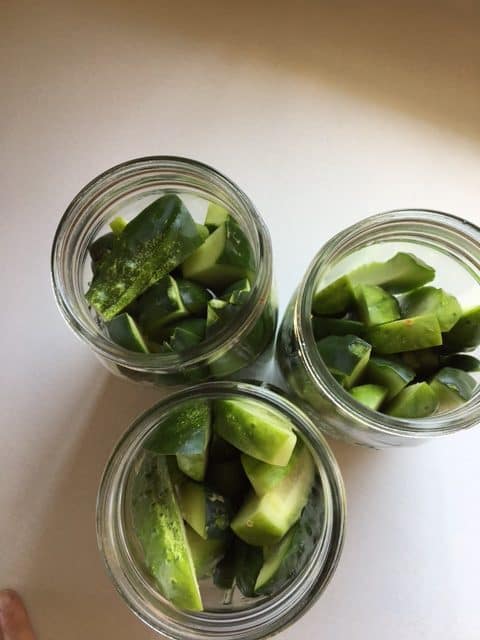 The recipe is for fridge pickles, so if you are scared of canning, there is no processing involved.  Basically, you’re just going to make the pickles, keep them in the jars on your counter for a few days, and then put them in the fridge.  Super easy, and amazingly delicious.  We have tried canning pickles before, but no matter what tips/tricks I try (pickle crisp, grape leaves, etc.), the pickles are never as crispy as we like. Fridge pickles are always crisp, because they’re never heated.  The downside of course is that you use up fridge space.  We use my in-laws basement fridge as “Pickle Storage”, and their rates are very reasonable at 10% annual consumption.

I need you all to tell me that obsessive discussion of topics is totally normal seven-year behavior, and shall pass soon.  Please.  For my sanity, I need to hear that this hell will end. Jack jumps from obsession to obsession and shares every single detail with us.  Then as soon as he burns through one thing, he is on to the next.  First it was these rockets he saw at the store and wanted to launch.  He had it planned down to the second and where each of us would stand when he lit them off, what he would say, how high it would go, etc.  Then it was everything Lego and Mega Blocks.  After that, about going to college with his cousin (who repeatedly tells Jack he does not want to go to college), and what their dorm will look like, what kinds of video games they’ll play, what their bunk beds will look like, and so on. Now we’re on to all things Minecraft, and so help me God, I will stab my eardrums with a butter knife if I have to listen to one more freaking minute about TNT blocks and trap doors, and who knows what.  The hilarious (none of it is funny.  It’s all painful and terrible for me) part of all this is we don’t even let Jack play Minecraft.  He learns all about this via some books.  Yep, he is “playing” video games in his mind. That must be like nerd squared, right?

We went to a birthday party at the Hands on Children (worst name ever, right?) Museum in Olympia yesterday, and it is always a wonderful time.  The museum had a staff member doing face paint for the kids, and to my surprise, Jack actually wanted something drawn.  He has never sat still long enough to even attempt face painting, so this was a big moment.  He asked for “two dragons with the flames burning each others butts please”, and by george, he got it. 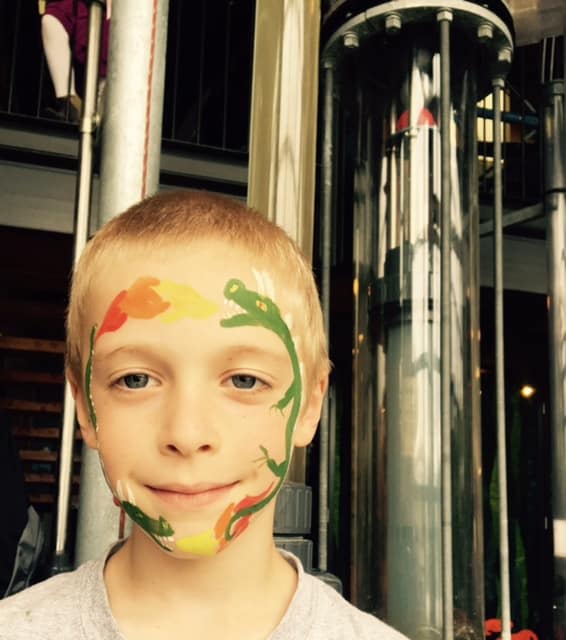 Troy and I discovered a new blackberry patch less than a block from our house this week.  We went one morning and filled our gallon bucket in less than 15 minutes.  My mom, Bennett, and I went back that same afternoon and filled another gallon!  Troy cleverly drilled holes in the bottom of my bucket, so I can rinse the berries without having to get a strainer dirty.  We freeze the berries on a parchment lined baking sheet, and then transfer them to a freezer ziploc.  I’ve made a ton of blackberry crisp, Jack eats them by the bowlful, and we’re adding them to our plain sparkling water on the daily.  Even with all our normal consumption, I have still managed to freeze five gallons of the free fruit. Come fall, we’ll make jam, pancake syrup, and use them in smoothies.  I’m hoping I can eek out another week of the season and get a few more gallons, but this coming week is going to be shit ass crazy with my schedule, so we’ll see. 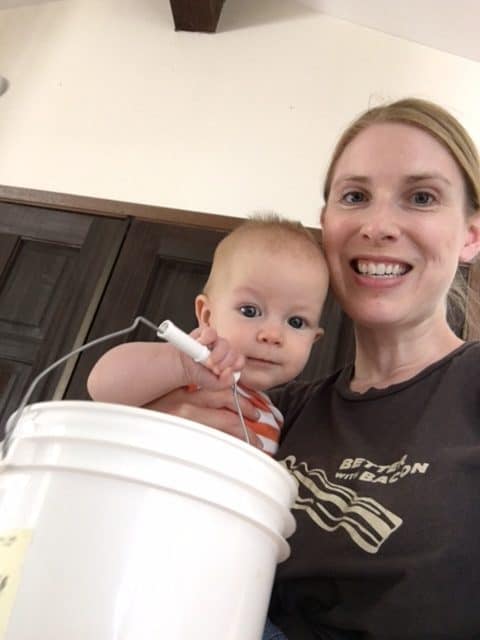 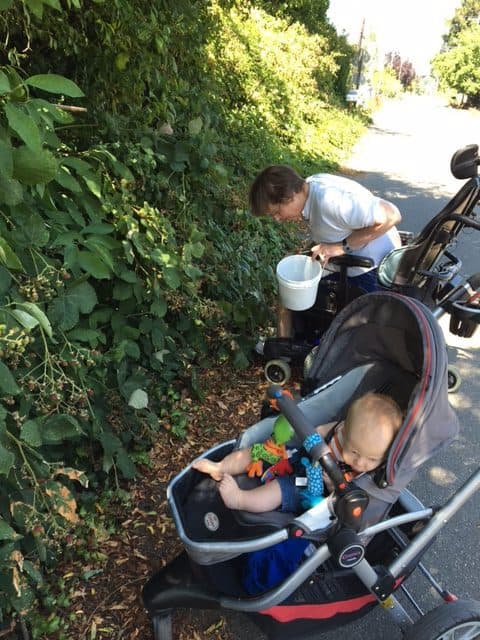 Bennett is so bored with berry picking, but he’ll understand the allure next year. 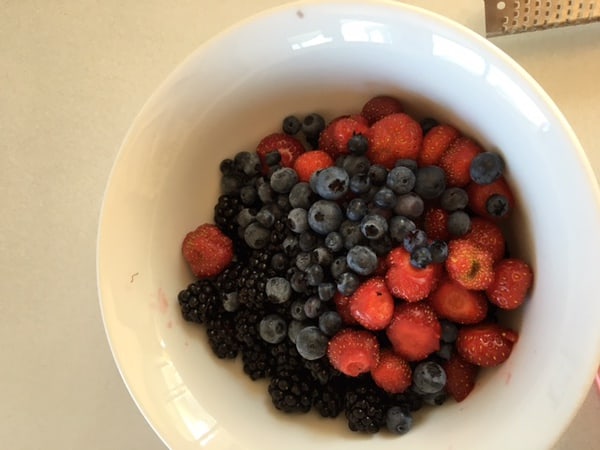 Randomly found a bunch of strawberries growing in my garden.

Last week I shared all the breastfeeding issues I’ve dealt with, and talked about a blog reader who sells breastfeeding aids on Etsy at Let Down Loveys (still digging the name hard).  Ironically the day after I posted about my supply issues, I had a TON of milk.  I thought it was awesome…until it was quite apparent by dinner that I had clogged ducts. Isn’t sharing fun?  Well, I took one dose of soy lecithin, and put those loveys in my bra for 30 minutes, and those ahole clogs were gone by 9 am the next morning.  SCORE.

Meal plan time!  I’m actually working a bit/bunch outside of the house this week for some side employment, and I’m 100% phoning in this week for meals.  Also?  I’m going to Denver for 36 hours this weekend.  BY MYSELF!!!  Anne is getting married in September to the coolest guy, and we’re having a mini girls weekend with the rest of the bridal party.  I take off at 6 am on Saturday, and return at 6:40 pm Sunday night.  I’ve been pumping like a mofo for the last three weeks to get ready for it.  My wonderful sister is moving in for the weekend to sister wives it up with Troy to help out with the kids and my parents.

Thursday:: TBD.  I may be working

Sunday::  Family dinner I assume.  I won’t be here!