I use Swagbucks as my search engine because I get rewards for my normal internet searches and turn them in for Amazon gift cards.  Sadly, the Swagbucks home page has a countdown to Christmas on it, and it’s freaking me the freak out every time I see it.  Ahhhhhhhhhhhh!

I’ll have a post later this week with some gift ideas for the awesome people in your life.

I also got so nervous, that I spent Thanksgiving night ordering all the presents I need for the kiddos we buy for.  I don’t care how great the Black Friday sales are, they’re not going to save me enough to pay for my bail after punching some dumb bitch out at Target.  I can’t stand huge crowds full of morons, and Black Friday pretty much seems like the worst idea ever to me. It’s true; I HATE dumb crowds.  I love people, and don’t mind normal people, but idiots and I do not mix.  When we lived in Los Angeles, we had season passes to Disneyland, and I would never go when I knew it was going to be crowded.  There is something about people who think it is ok to stop right in the middle of walk ways that makes me want to club you.  I also know every “secret” passage and cut through in every land at Disneyland.  Fifty percent of that knowledge comes from wanting to flee a herd of asshats, and the other fifty percent comes from Troy working there for a few years as a contract employee on their film crew.  Knowledge is power.  The More You Know.

So, I know my strengths and weaknesses, and I stay home in my jammies and order from Amazon.  And reorganize our spice cabinet, because I AM SO AWESOME! 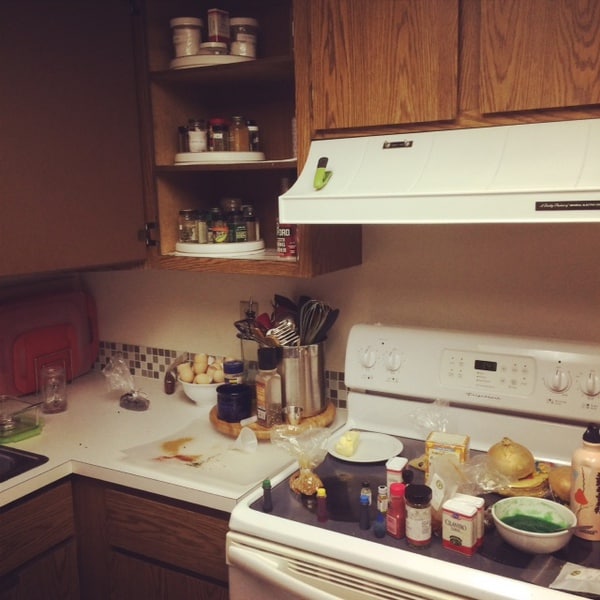 Oh that bowl of weird green stuff?  That would be Troy and Jack playing with applesauce and some food coloring bottles I found.

We got a wee bit of  snow yesterday.  It was cold, beautiful, but not enough to have any fun with, nor did it stick around for very long. 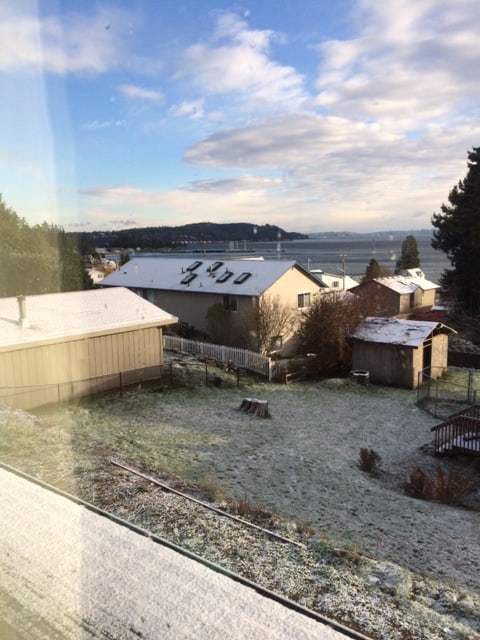 Did you have a nice Thanksgiving? Ours was fairly decent considering some crap news we got the day before (will tell you later when the tests come back, but it’s not related to Jack, Troy, or myself), and the fact that Troy had the flu and stayed home to sit in his pajamas and watch crappy TV on Netflix.

Still feeling lousy even today, Troy has kept a low profile, while Jack and I have done our best to be quiet and out of the house as much as possible.  I’m ready for this shit to be over and so we can go back to “normal”.  Yesterday, Jack and I went to our friend’s and decorated gingerbread houses, and Christmas cookies.  I made Troy a cookie Chewbacca.  It looked much better in my mind. 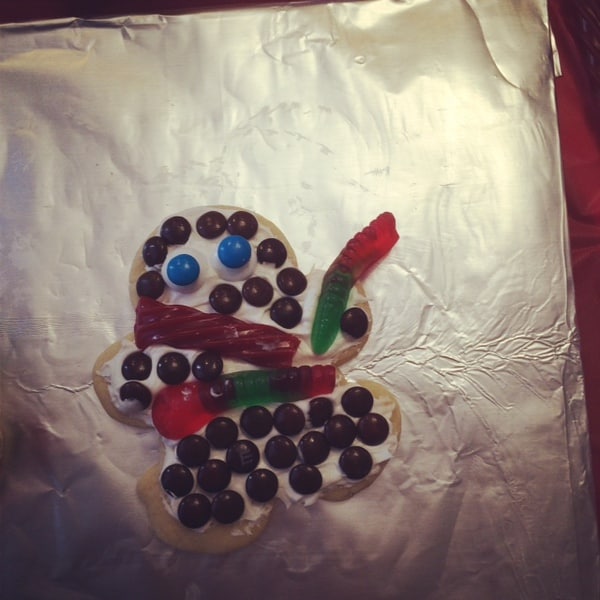 I spent Friday night finishing up a scarf I’ve been working on for a week or so.  It’s a Christmas present for a friend.  It’s the softest, warmest yarn ever (baby Alpaca), but I’m not going to lie, it smells a bit weird. 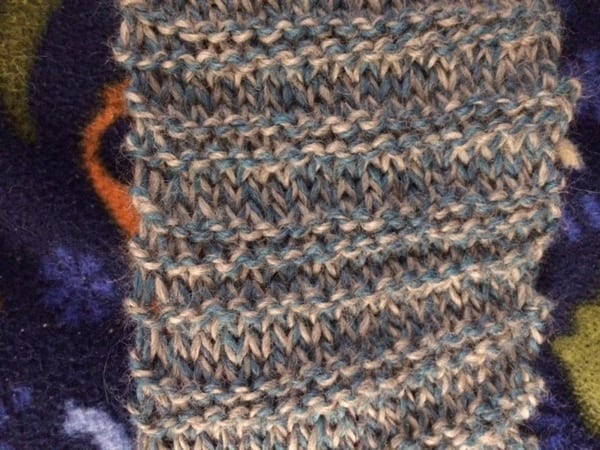 I also spent some of the week, and most of Friday night cutting and piecing together my next quilt which is intended to be a Christmas present for a coworker who collects sea glass.  I took this pile of fabric from this: 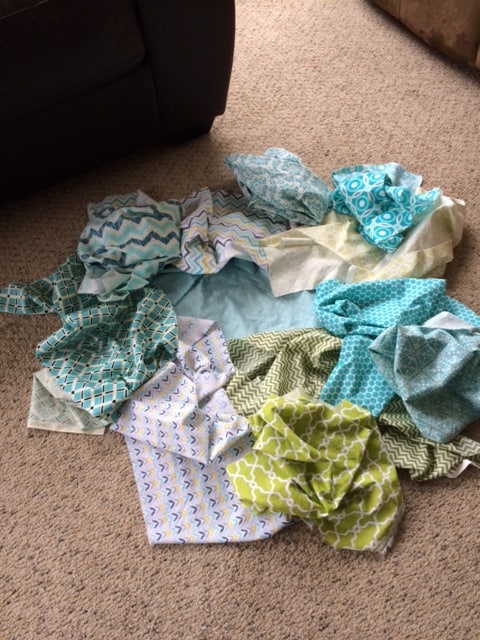 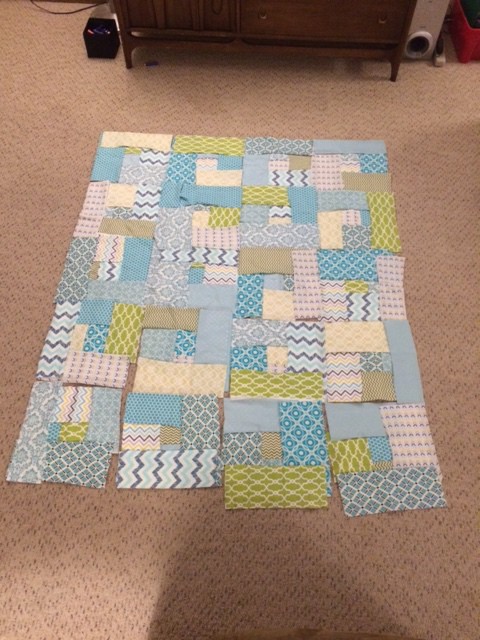 Now I just have to sew it, which always takes the longest amount of time.

I also finished up week-long project of cleaning out our filing cabinet.  It was so packed that we couldn’t fit ONE MORE stupid piece of paper in there.  It was insane!  I found Troy’s student loan information that we paid off back in 2004.  I found his taxes from as far back as 1999, and Mapquest directions to old movie shoots that Troy would work on in Los Angeles.  My hatred of clutter is no secret, and I filled up four bags for shredding 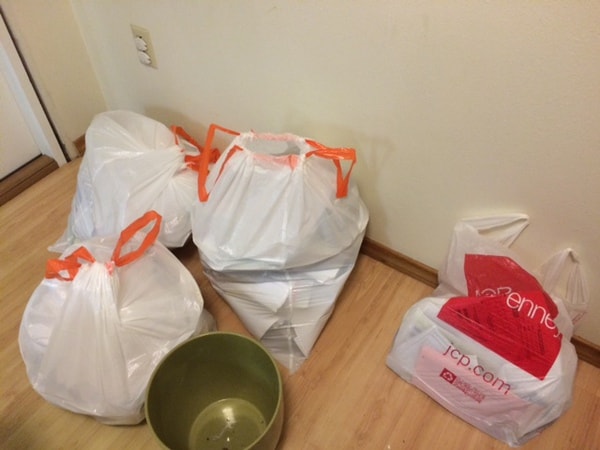 and this is what is left: 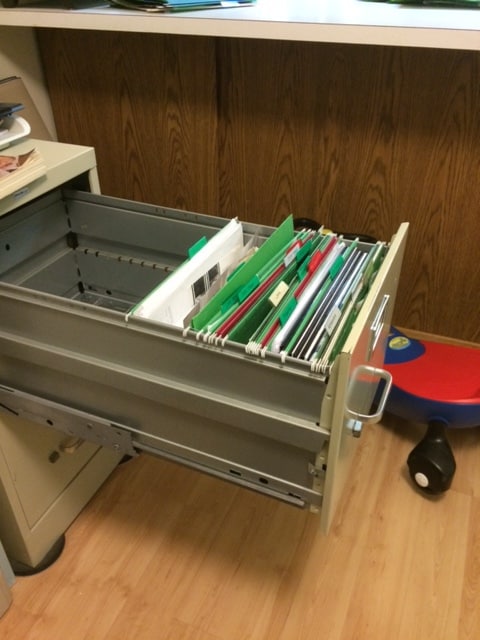 Is it weird that seeing all that “stuff” that is no longer going to be in my home, and an organized filing cabinet gets me a lady boner?

I think the most important news all last week is this: 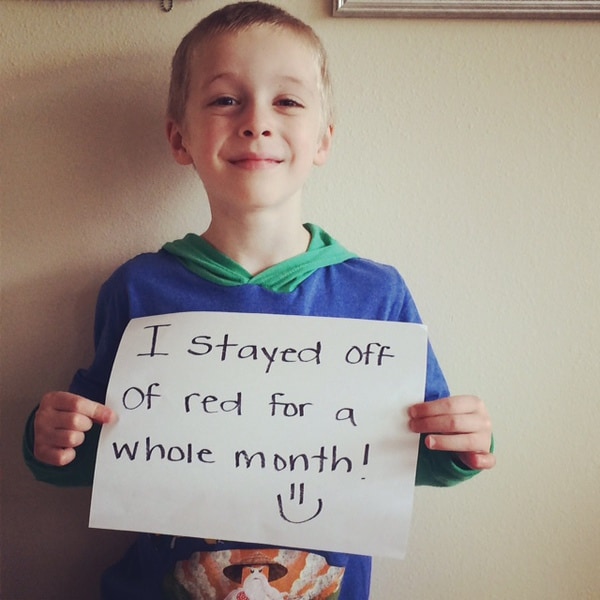 I posted that photo on Facebook and Instagram and my favorite comment was from someone on Facebook who wrote “congrats-juice-lations”.  Jack of course was working on a whole month without getting on red at school, and the reward I promised was a juice box a day in his lunch for December.  He doesn’t get juice at home, and is so looking forward to stopping at Costco later today to get their organic juice boxes.

Last night at dinner, Jack was eating a raw pea pod.  He took one of the little peas out of the pod and said “it’s just like when I was in your belly.  Hey…how did I get out of there Mommy?  Did someone cut me out”?  Troy and I looked at each other and he threw me under the bus and said “yeah Mommy, how did Jack get out of your belly”.  I decided to go the honest route and I said “you came out of the area where I go to the bathroom”, to which Jack yelled “you pooped me out of your butt”?!?!  Troy and I couldn’t stop laughing for a few minutes, but I managed to say “no, buddy, like in my front” and Jack spent the rest of the night saying “I came out of Mommy’s wiener”.  Charmed I’m sure.

Tuesday:: Working late, so the in-laws are feeding Jack.  If I’m being honest, I hope they make me a plate to take when I come pick him up.

Thursday:: spaghetti, salad, and peas.  Yes, that was on the menu for last week, and no, it did not get made.  Why?  Because Troy and Jack stayed home and ate popcorn, while I went to see Mockingjay with my mother-in-law, and sister-in-law.  Such a great movie!

Friday:: Popcorn and movie night.  Best night of the week!

Saturday:: Chef salads, some kind of soup (haven’t decided yet), and crack bread.

Sunday:: Family dinner at my parent’s.  This week we are doing a Thanksgiving repeat, and I’m bringing bread, homemade cranberry sauce (my favorite part of Thanksgiving), veggies and hummus, and wasabi mashed potatoes.

This week I spent $3.50 at the farm for raw milk, $23.13 at our local butcher for grassfed burger, and a big ass pork butt (which made Jack giggle for a long time after I ordered it) for the crockpot pork.  We’re hitting up Costco after swimming lessons, and it’s gonna be a huge trip.  Jack pulled two tags from the giving tree at school, and one boy wants a pair of shoes, and the other boy wants a Batman sweatshirt.  If your deepest desire at Christmas is a pair of shoes, you need some more shit in your holiday bag.  We’re going to get shoes boy some books, and a toy, and Batman sweatshirt is getting a movie and some books.  That’s why we have a Christmas budget, and it’s way more fun to give that stuff, than crap to our already overindulged child.