My grandpa used to say I was like a fart in a hot skillet; always moving around quickly.  I got my classy demeanor from him.

Troy sighs and groans when I’m puttering and constantly tells me to sit down and relax.  When I do sit down, I’m usually doing something more than just watching TV.  I’m probably blogging, or knitting, or working on my next sewing project.

I tell Troy (and others) to chill out because it’s not like I’m doing all that much.

Well, I got a Jawbone for Christmas, and it turns out that I am doing “all that much”.  This was from the day after Christmas.  A day that found me not working out, driving a total of two hours, running a few errands, and just doing my normal puttering around the house.

Christmas was amazing as always. Troy’s family was insane as usual.  It’s unlike anything I can describe.  I learned long ago to just embrace it, and reap my rewards and do not under any circumstances tell others in that family how to shop.  I’ve learned the hard way on that one!  🙂

In addition to the Jawbone, this holiday season found me spoiled with such gifts as: soup bowls (everyone knows my love of the brothy stuff!), a mondo memory foam body pillow that is so heavy and cozy, it’s like snuggling up to Jon Hamm every night, a new laundry drying rack, a Seahawks shirt, an awesome vintage Ninja Turtles shirt, some food porn cookbooks (this one, this one, and this one) two gorgeous stainless steel water bottles that are made in Washington State (this one and this one)(oh and the company employs veterans and uses recycled materials), a necklace from Jack (below), a 2015 copy of my favorite calendar, and, and, and…too much! 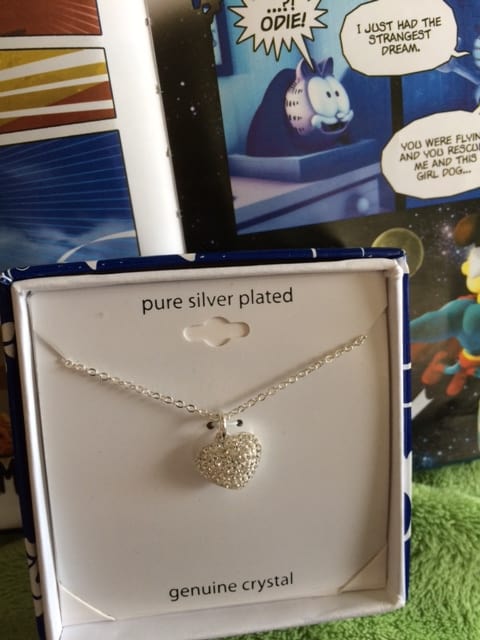 My friend Tara made me some lovely handmade gifts for a gift exchange, and this infinity scarf is the prettiest thing I’ve seen in a long time.  They’re exactly my colors, and it’s so soft and fits perfectly. 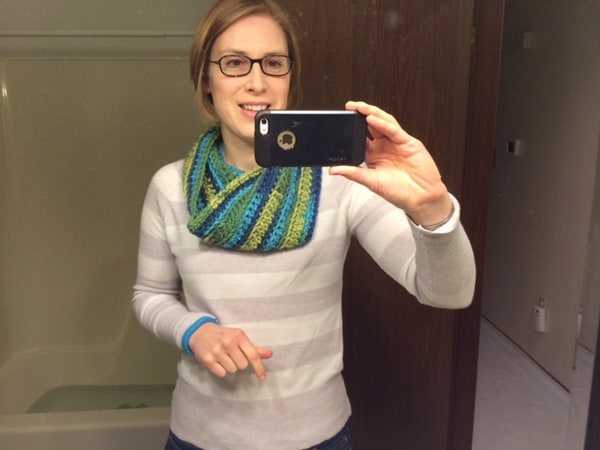 Even with all the gifting and cool loot, Jack gave me the best gift of all.  On Christmas night, while he was playing with all of his new toys, he said I could get rid of all his “baby toys” because he is a big boy now.  I spent a glorious two hours filling up seven (yes, SEVEN) giant garbage sacks full of toys for Goodwill.  I beg family members to stop buying him toys, but it isn’t heeded.  Hence the enormous amount of un-played with toys I dropped off at Goodwill on Friday.  I also thinned out his bookshelves, and gave away boxes and bags to family and friends.

The level of satisfaction I get from throwing shit away cannot be captured.  It is so freeing to thin the herd so to speak.  Troy and I have been sharing Jack’s closet for the last four months thanks to the remodel.  Even with three people using one closet, I was able to clear off multiple shelves and rearrange toys, Nerf guns, and oodles and oodles of Legos. 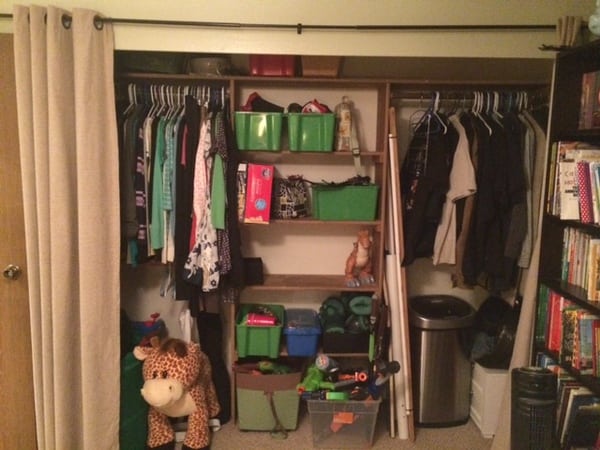 That photo seriously gives me a lady boner.

This past week brought a new member in to our family care of Craigslist.  A 1964 Thomasville (I found the stamp) little end table that will soon be housed in the living room. 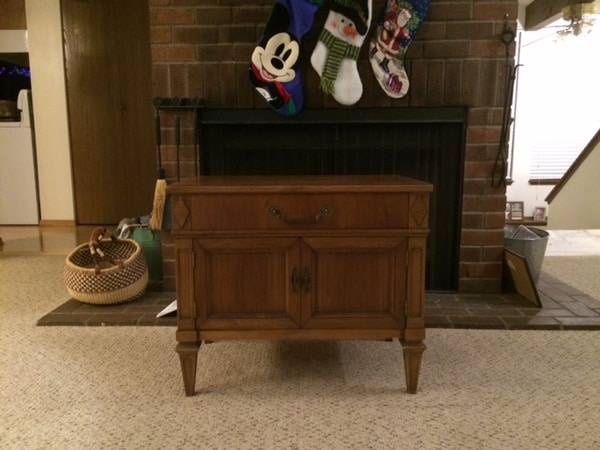 It kind of looks like a cousin of our TV stand ($15 garage sale find that we later found out was worth $1k). 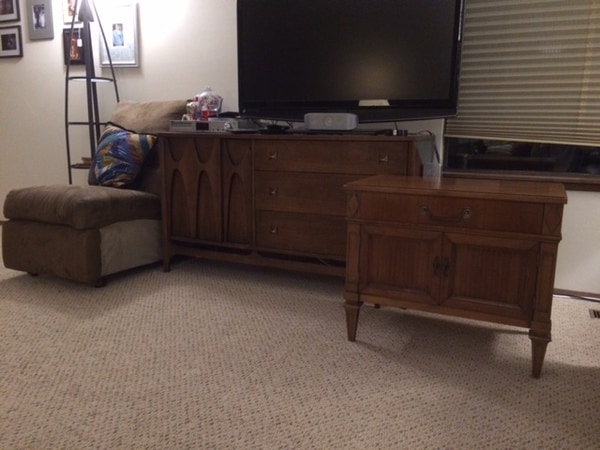 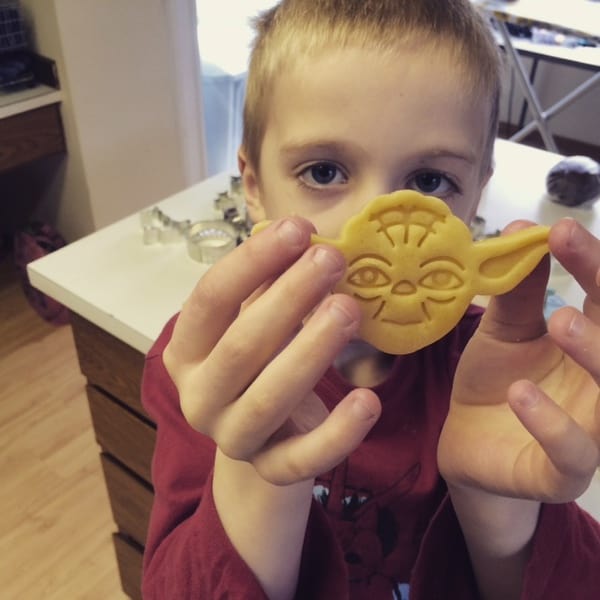 We made so many cookies, that Jack decided to label the entrance to the kitchen (love our popcorn ceilings, horrible light, and hideous fake oak cabinets?  Yeah, me too…). 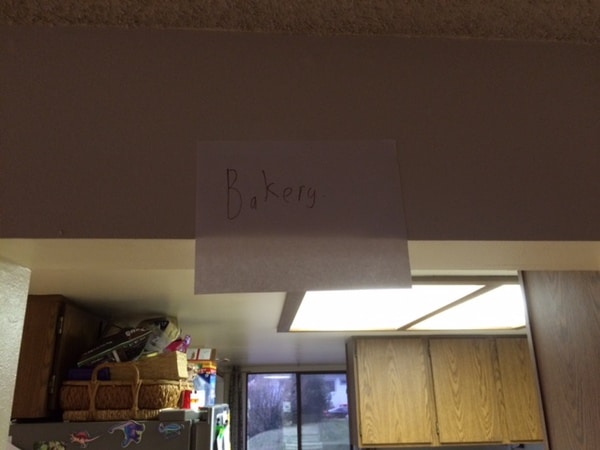 Jack has two kitties that are very important to him.  They go everywhere he can manage to take them, and they sleep with him every night.  They even snuggle in front of fires that are built specifically for said kitties. 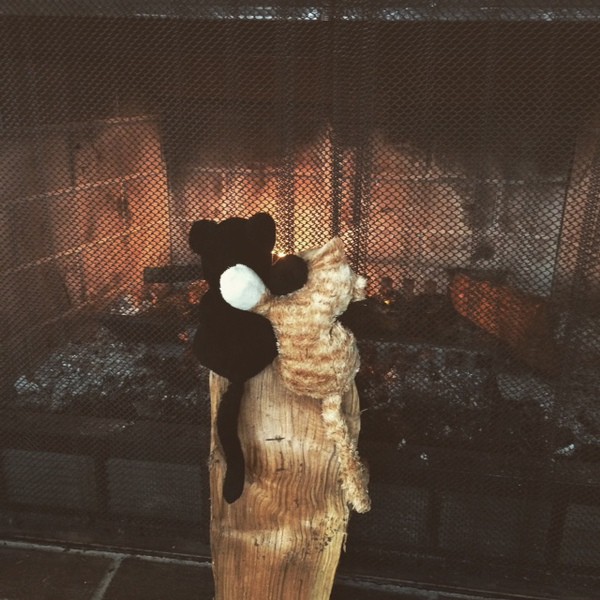 These kitties sleep with Jack nightly, but like kitties are wont to do, they roughhouse a bit and end up jammed in weird places around his bed. 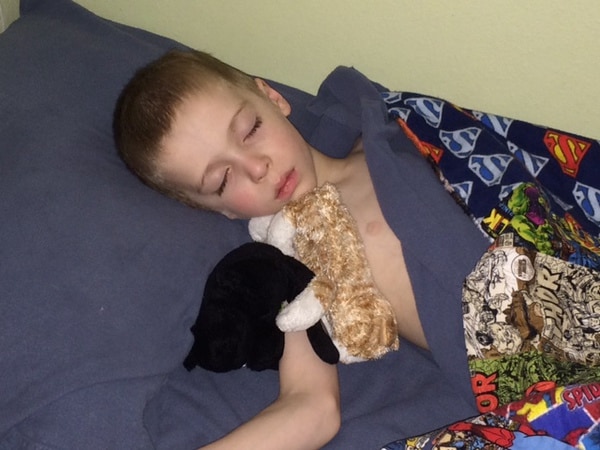 His kitties were screaming for some discipline.  So, for Christmas, they received sleeping bags, made by momma.  Notice how the sleeping bag matches Jack’s Christmas quilt from last year (in photo above)?  I made it with all the scraps leftover from his 2013 quilt.  Didn’t cost me a dime. 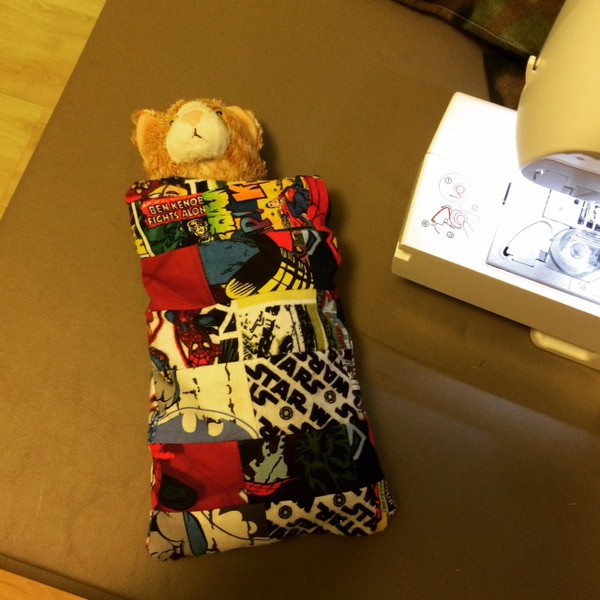 Friday night, my sister offered for Jack to spend the night (fool!).  Troy was working, and I was alone in the house for 12 glorious hours.  Like anyone in my shoes, I made freezer pizzas, cleaned up my inbox, and ate California rolls while watching Hulu.  And then I woke up bright and early and spent an hour mucking out the chicken yard (which was so gross after a ton of rain, that I almost hurled when the pitchfork hit mass), and made good use of all the shipping boxes that came to our house this Christmas. 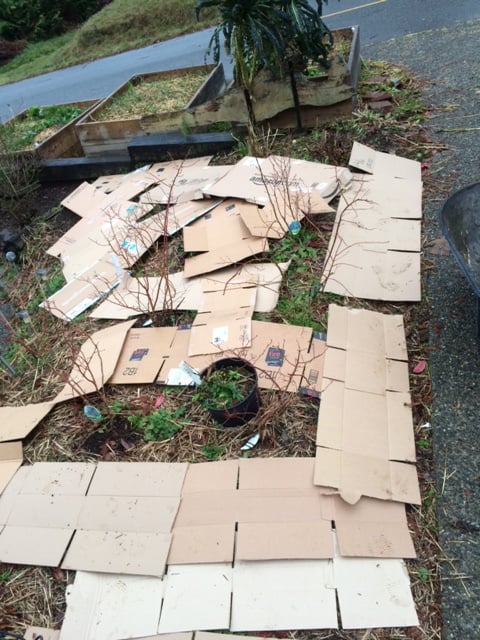 Meal plan time!  Jack wanted to help this week, so he made a few suggestions while I was composing this post.  Helpful that one. 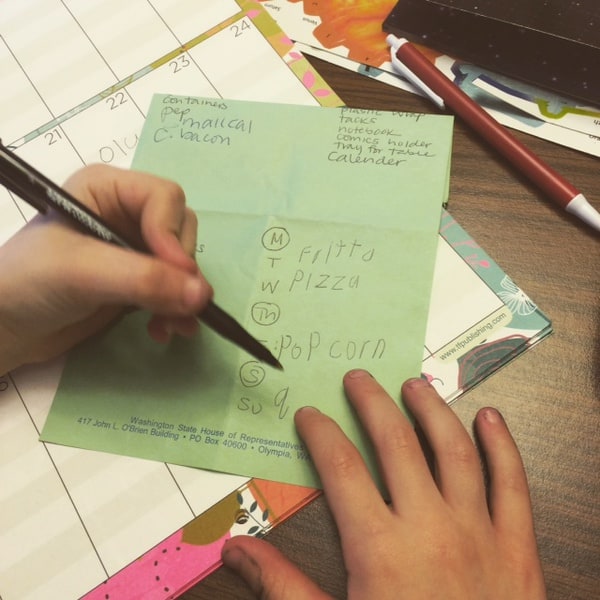 Monday:: Ham, and a huge amount of veggies (depending on what I find that looks good at the grocery store later today).

Tuesday:: Per Jack, a frittata (half will have my dad’s delicious smoked salmon on it) and a crap ton of veggies.

This week I spent $19 at Costco, $23.50 at the local farm (half-gallon of raw milk, and four dozen eggs…two dozen for us and two dozen for my parents because my lazy ass chickens are still not laying), and an unknown amount at the grocery store (going after church).