If you follow me on Facebook, you’ll know that Troy and I were looking for a new series to watch.  He wanted to start Game of Thrones, but we don’t have HBO.  We settled on The Walking Dead (streamed on Netflix with our Roku), which is where the “I’m an idiot” comes in.  Because I’m a giant wimp and these kinds of shows freak me the freak out.  We’re a little over one episode in, and I’ve spent half the time out of the living room and the other half yelling “ack, it’s a zombie”!!!

Can someone tell me why in episode 2, when the main character is stuck in the tank, he never once tries to DRIVE THE ARMORED VEHICLE????

The Facebook discussion brought up some excellent suggestions for series to watch.  Check out all the ideas if you’re cruising for any new shows.

In “my kid is a big boy” news, Jack has his first loose tooth.  Growing up, we had little tooth fairy pillows where we could put our newly freed chompers to safely wait for the tooth fairy’s cash visit.  Jack doesn’t have one, but I have some limited sewing skills, and Troy has some fine drafting skills.

Jack initially wanted a pillow shaped like a Nerf gun.  Then a Chinese throwing star.  Troy threw out the suggestion of a shark, and then sketched out his idea. 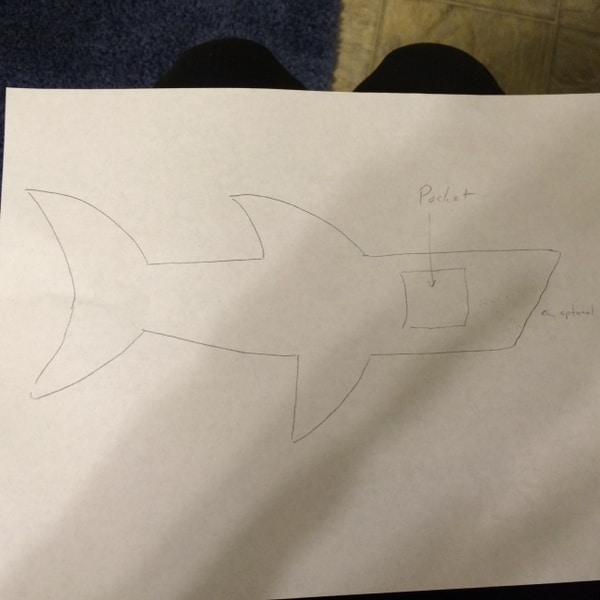 I’m going to make it later tonight, but I’ve modified the pattern a bit.  I hope I can make it turn out like it appears in my mind.

This long weekend has been crazy already.  Our weather this “winter” been downright tropical compared to you East Coasters.  We had maybe two days of frost, zero snow, and it’s almost 60 degrees and sunny outside.  I’m going to mow the lawn tomorrow, as well as start all my seeds for the spring/summer planting.  This year I am trying potato grow bags because for the last few years, I’ve planted potatoes in some of my raised beds, and they take up so much darn space.  When you garden on a big scale, in a small space (we use about 25% of 1/5th an acre), anything you can do to maximize the space is important.  I am hoping these bags will give me a decent yield while freeing up valuable raised beds.

Troy and I had a date on Friday night, and Jack spent the night at my inlaws.  He told me he had Starburst, gumballs, and Dairy Queen for dessert.  Spoiled little punk.  Troy and I parked in a downtown area a few towns over, and just walked until we found a place that looked good.  The restaurant was full, so we sat in the bar and took full advantage of their Happy Hour food specials (neither of us drink).  When I used to put on giant expensive events for my last job in Los Angeles, I once hosted a dinner (on the company’s dime mind you) at Katsuya in Brentwood.  That is where I fell in love with seared Shishto peppers as a dish.  This restaurant we went to on Friday randomly had them as an appetizer, and Troy and I were fighting over who got the last one.  I need to grow these things!!!

Monday:: Yakisoba, these brussels sprouts, and the last of the lumpia from the freezer (sob).

Tuesday:: I have a late work thing, so the boys are having “boy day” and Troy will make pizza.  Of course.

Thursday:: The gnocchi I made two weeks ago, and roasted root veggies.

Saturday:: We’ll be eating with my sister and her family.

originally posted on February 15, 2015; Updated on June 12, 2018
15 Comments//Leave a Comment »
Categories: Meal Plan
« Previous PostHow to: get out of the house in the morning without stabbing a family member in the eye with a spork
Next Post » Whatcha Readin’?