Thank you for reading, and commenting, and emailing, and forwarding.  THANK YOU!

Why my heartfelt appreciation?

Wow, I’m so in awe and love you for tuning in, even when I have nothing to talk about, but still have a sick desire to ramble on.

So, thank you. Again.

In other news, my son might be a psychopath.  He is obsessed with the idea of Cupid right now and hates the idea that someone (something?) might make him love a gross and stupid girl.  This was our conversation yesterday morning:

Jack: Mommy, can I have a real bow and arrow some day?
Me: Perhaps.  Why?
Jack: Can it be an arrow with a sticky end, like Cupid?
Me: Um, what?
Jack: Ok, and instead of spreading love, I want to spread destruction.

I’m going to hide all the lotion and all the baskets in my house, lest he starts digging a hole in our backyard.  Note to self: don’t buy a small white dog.

He used to be so sweet and innocent… 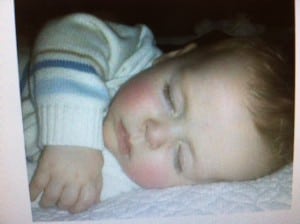 The time of the year has come when my home is invaded with fruit flies.  It’s freaking nasty, and I can’t walk in to the kitchen without them swarming my face.  My tried and trusted fruit fly trap (glass of water with pear vinegar in there, and a few drops of liquid dishsoap) is working hard, and I’m emptying two glasses a day full of death.  Barf.  I just downloaded the photos in my camera, and found that Troy had taken some artistic shots of the flies suspended in the liquid.  It’s actually quite pretty in an artful way, but extremely disgusting.

Instead, here is what I picked from the garden on Friday: 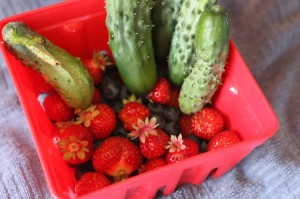 The second crop of strawberries is ripening now, and they’re delicious!  Much sweeter than the June crop, and since I increased our strawberry plant patch by 10, we’re getting a lovely haul.  The raspberries are ripening their second crop as well, and Jack and I are eying them hungrily.  Jack loves raspberries more than me, but I have a good 2.5 feet on the kid, and the fall crop tends to grow up high.  Suck it kid.

Chicken update: we’ve now had two days in the last week where we’ve had TWO eggs in the nesting box!  Whoa, production is really picking up…

In poor me/first world problems news, our first ever family camping trip which was scheduled to take place on Friday, has been cancelled.  I’m so sad.  Thank GOD we didn’t tell Jack, because homeboy would have been so disappointed.  Troy got called for a last minute test at 7:30 am Saturday morning, over an hour away.  Blerg.

If you’re not familiar with the process of trying to become a fire fighter, let me break it down for you.  It’s quite similar to joining the mob or attempting to open up a unicorn meat ranch.

Step 1: Kiss your family good bye, because you’ll never see them again.
Step 2: Pay out the nose and ass for random tests.  But wait, there’s more!  Each department requires a different test, and you have to pay for every single one.  And then, you have to take a physical fitness test that also costs money.  Oh, and every department also requires a different physical fitness test, so you have to take multiple ones every six months.  And to sweeten the pot, even if you do well on one of the written tests (which you can’t until you’ve taken multiple ones because they’re written to allow you to improve only if you have taken the same test over and over), the testing site won’t release your scores if your physical test scores are more than 5 months old.
Step 3: Finally get an interview, but realize that they only picked you because they need to fill an interview schedule, because surprise, they already had someone in mind for the position.
Step 4: Come home and have your wife give you the side eye and tell you for the hundredth time that “you know love, fire fighter interviewers are called “oral boards” for a reason.  Clearly you’re not getting the hint, which is why you’re not getting the job”.

Multiple the four steps above by 3.5 years, and you too will know how to become a fire fighter!

Monday:: I’m going for an eclectic mix of “what I need to use up in the fridge and the garden” and making bruschetta and quiche.  Random?  Yes.  Delicious?  Yes.

Wednesday:: Tomato soup (trying to use up last year’s jars before this year’s crop is coming out of my ears) and more bruschetta.

Thursday:: Whole wheat pasta with diced garlicky zucchini, tomato, onion, and eggplant.  Recipe courtesy of Food to Live By: The Earthbound Farm Cookbook.  I’ve had this book for years, after my aunt gave it to me for Christmas after she found me reading her copy from cover to cover.

Saturday:: Our little niece is turning one, and the party is late in the day, so we’re chowing down there!

Sunday:: Family dinner at my parent’s.  I’ll either bring apps or dessert.

This week I spent $3.50 on raw milk, $9.50 at the fruit stand, $8 ish at the local butcher (the bill was much higher, but I was actually purchasing additional chicken for my coworker), and I have no idea how much at the grocery store, as I’m going today after church.  There is little on my list, but we’ll see.

What is on your menu plan this week?