Ever have one of those days where you’re so beat, that you declare “movie night 2.0”, make nachos, and lay on the couch while your kid watches The Empire Strikes Back (for the first time ever)?

I just spent 20 minutes of writing this post trying to figure out how I accidentally zoomed in to epic glaucoma proportions on my browser.  Cause I thought only being able to see seven words at a time might be less efficient than trying to figure it out.  In case this ever happens to you, your fat sausage fingers (like mine) can fix it by holding down CTL and “0” at the same time.  Who knows how that happened.  Maybe it is because my nacho fingers are pretty fumbly.

Back to the point of this post so that I can free up my hands and go eat my “doctor prescribed” ice cream.  Cause you know, priorities.

After the hottest driest summer on record for Seattle – we had more days above 80 degrees than Chicago and Boston…which is pretty hard to tolerate in a region where less than 10% of people have air conditioning – we had a gorgeous amount of rain on Saturday.  It came with some pretty strong wind gusts of 35-60 mph.  Strong enough to where the power went out when Jack and I were at Trader Joes.  I wanted to shout “no one panic, I’ll eat all the ice cream and JoJos before they thaw”.  Nevermind that JoJos aren’t in the freezer section.  I’m a giver, and I was willing to just jump in and get to work.  Waste not, want not.

We slept with our windows open on Friday night, and the sound of rain was amazing to hear after nothing for so long.  It made me have to pee even more, but was totally worth it.  The chickens slept in on Saturday, and when I finally went to let them out, they ran out to their yard as normal, paused, looked at each other like “what the cluck”, and ran right back in to the coop.  The little princesses had forgotten what it was like to have wet feet.

My biggest hope is that some of this rain reached Central and Eastern Washington to help with all the crazy wildfires going on.

I sold plasma and a dozen (chicken) eggs yesterday in order to afford the giant list of school supplies that Jack’s school sent out.  Holy balls people, is this first grade or the prom?  The list had “ear buds (no more than $5)” on it, and the woman at Target laughed at me when I asked her where the $5 ear buds were.  She said the cheapest they had was $10, and a quick search on Amazon showed she was correct.  Whomever made that list needs a reality check.  Oh, and they require you to bring in two blue or two green dry erase markers.  Know how many of each color are in a pack of dry erase markers?  One.  So you have to buy TWO $3 packages in order to just get two markers of the same color.  No bueno list maker.  No bueno.

I then went and had to sell my hair to buy Jack some new shoes.  I didn’t buy him new shoes just because it is back to school, but his feet were busting out of his most current pair, so I decided to take advantage of all the back to school sales.  With the enormous foot problems my family has, I am always willing to invest in quality shoes.  Not to mention that Jack only ever has one pair at a time, because you know, boys.  My giant six year old is wearing a boy’s size 3.  THREE.  I held them up to my shoes (size 10) and his were getting pretty darn close to mine.  Troy wears a size 14 (and yes ladies, what they say is correct. The bigger the foot…the bigger the farking socks left all over the living room), so Jack is pretty much screwed to look like a Saint Bernard puppy for the next five years. 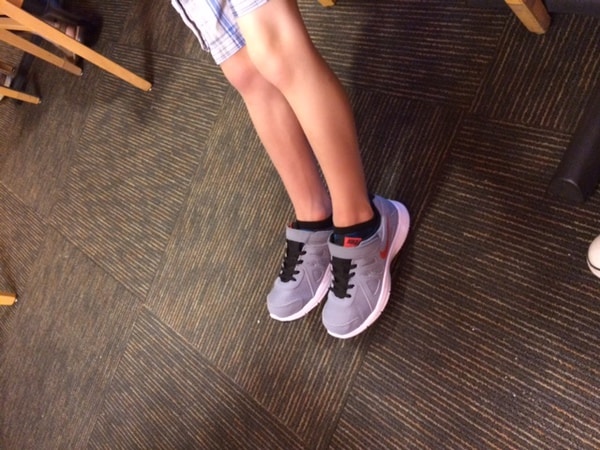 No clue why this photo is sideways. Ever since I got my free Windows 10 upgrade, photos have been f’ed up between the download and WordPress upload.

Last Sunday, a coworker and my sister came over for “Pickle Academy”.  We took these 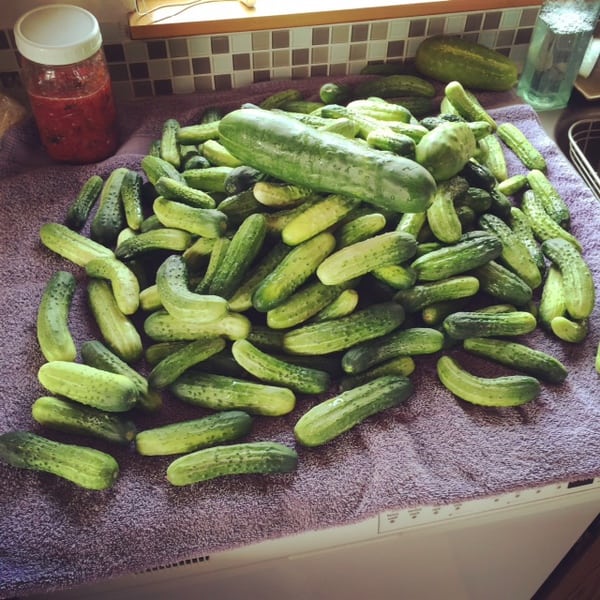 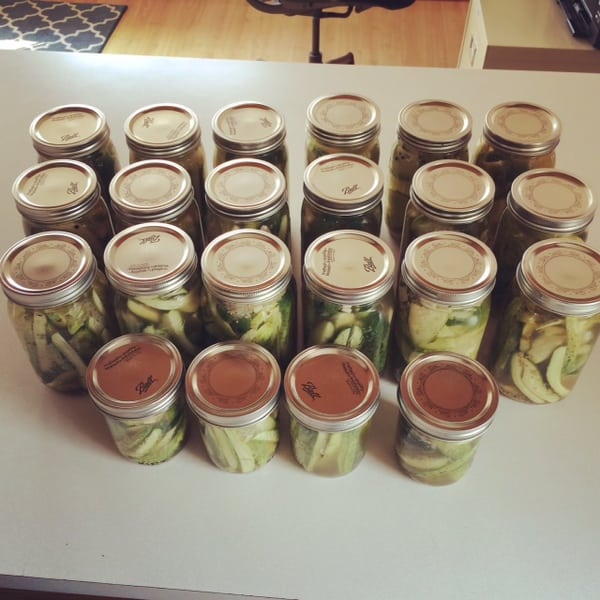 Oh hey, now my screen is super dark and I can barely see my typing.  Windows 10 for the win!

In the biggest news around these parts, my dad is out of the hospital. And on some heavy ass antibiotics.  When I tell people I know who are in healthcare what he is taking, they all say “whoa, the big guns”!  And they have to be administered twice a day, and it takes an hour each time.  Guess who is now rocking some rubber gloves and working a heparin flush and a Vancomycin drip?  This girl.  The same chick who wants to barf if she catches sight of her dad without his fake leg on, and almost hurled when she heard his shoulder had been drained? 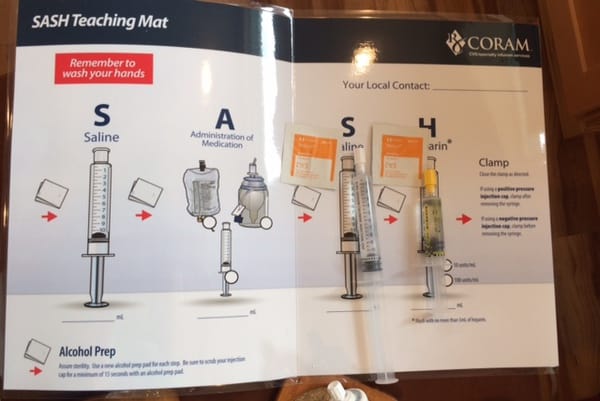 I’m doing my best to not disturb the sterile field by dry heaving.  Class C drugs are “exciting”.

I’m off to go inject some stuff in to some people, so let’s get down to the meal plan, m’kay?  It’s supposed to still be rainy today, so I’m making beef stew, dutch oven bread, and salad.

Wednesday:: We’re trying these kebabs, and pairing them with green beans. (as I typed that, I realized I forgot to buy pineapple this weekend).

Friday:: Popcorn dinner, and I have been told, a viewing of Return of the Jedi.

Saturday:: Let’s not lie, I’m doing takeout or going to a restaurant because I am farking exhausted.