Thank you all for your kind words last week about our exciting announcement that I’m quitting my job at the end of January.  It’s terrifying and exciting all at the same time, but bottom line is we’ll never know if it will work out until I give it a shot.

I’m giving myself a year to adjust, see how I like it, and try to make a go of things.  If it doesn’t work out, it doesn’t work and I’ll head back in to the corporate world.

This week has been a busy one in our house.  We (collective we, as in Troy) pretty much finished up the extra bedroom.  All that is left is the trim around the closet, and then one more room in the house is DONE!  We (again, collective we as in Troy and my father-in-law, because Jack and I were in Denver) moved Jack’s bed in to the extra bedroom last week, and then Troy and I did the bookshelf and dresser this week.  The plan has been for Jack to be in this room temporarily while “we” scrape the popcorn ceiling, paint, rip out old carpeting, and install wood floors in Jack’s old room.

Well, he moved in to this room and decided he doesn’t want to leave because it’s so cool.  Fine by me son, I love that plan because now we don’t have to move all your shit back!

Know what else I love?  That next weekend, we’re going to IKEA because we need to upgrade Jack’s bookshelf for the third time.  He keeps outgrowing the space he has, and since I refuse to stop getting books (garage sales, library sales, Goodwill, birthdays and Christmas, and some new), I am totally ok with shelling out more money for more shelves.  Nerds need space too, and I love my nerd. 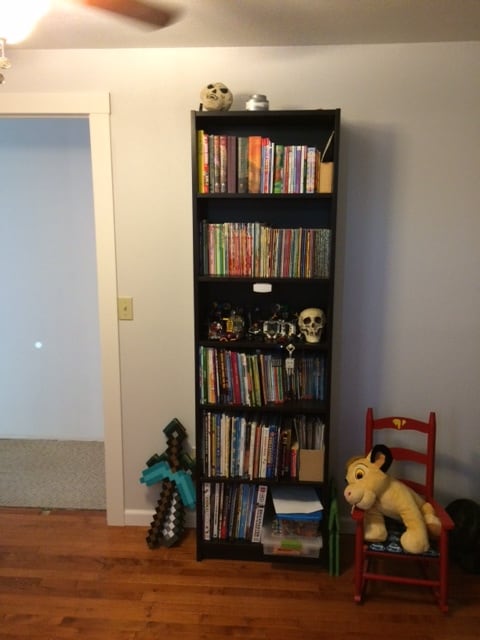 In the photo above, you can see the wood floors in Jack’s new room, vs. the hideous disgusting carpet in the hallway.  It’s like a clash of the dark side vs. the Jedi.  The good guys will win this battle folks, don’t you worry.  You can also see the new white door that Troy and my father-in-law installed.  Soon, all the rooms in this hallway will have new doors.  Nice white ones to replace the faux 70’s oak particle board doors that were there before (and the last tenants punched exactly one hole in each door before moving out).  It’s amazing to see that beacon of lovely white door when you look down the hallway.  The rest of the doors look like the set of a 70’s porn, but I am so excited to see it all finished.

Jack’s old closet was a hot mess, even with Jack and I both being well-organized people.  There was way too much room for clothes, some of the shelving was too high for him to reach on his own. 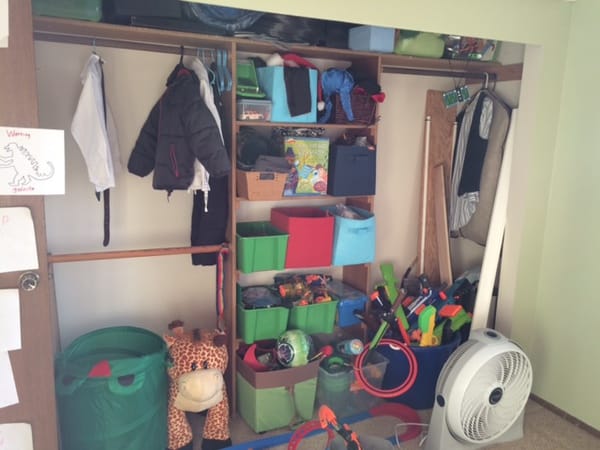 “We” had a blank slate for this new closet (it was just a shell), so decided on minimal clothes bars, and just lots of shelves for toys.  I always like to point out that we have purchased exactly four of those toys. We found a cool organizer thingy at Costco that was $99 with a rebate and is perfect for storing toys.  When we ran the numbers to build shelving, it was cheaper to go with the Costco thing.  Plus, if we sell the house down the road, the other people will likely want actual clothes racks instead of Lego cubbies, so we can easily pull this out. 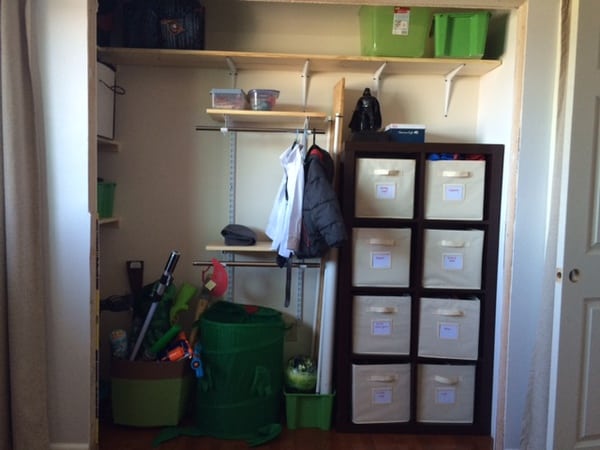 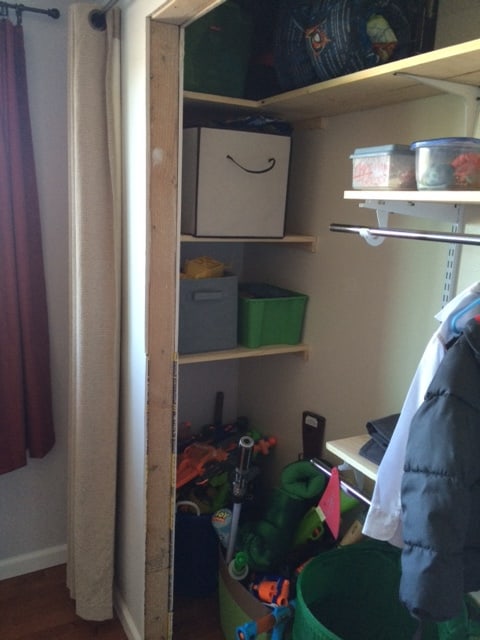 I spent a few hours in the garden this weekend trying to clean up the total trainwreck it had become.  Things were overgrown and weedy, and other things were way past harvesting time.  I accomplished a lot, but still have way more to do.  Some day…

The garlic I harvested was the most beautiful I have ever grown.  Hands down, also the biggest heads.  That’s what she said.  I purchased this seed garlic in 2011, and have been saving the largest heads from my harvest every year since to use as the following year’s seed garlic.  Not sure if it has been natural selection of awesomeness, or the amazing weather we have had this year, but this garlic is giant!  Almost every head looks like this. 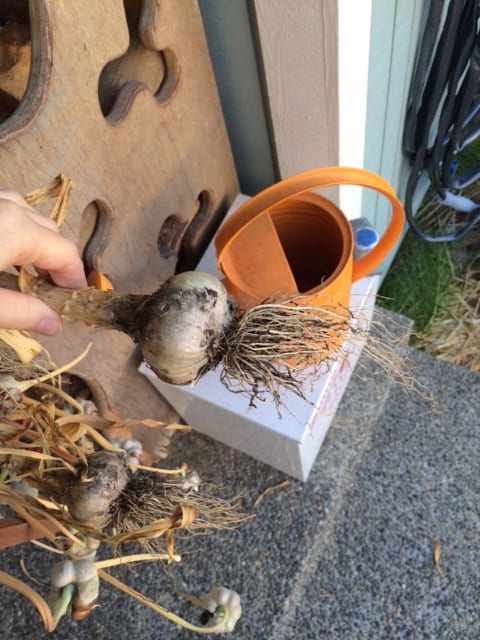 We had another hot week here in Seattle, and if possible, the grass has gotten browner, and the garden has gotten wilder.  This is a summer we’ll so not forget.  My sister and her husband are building a house and should be in it by next summer.  Their new house will have air conditioning, and they’re giving us their portable ac unit.  In my mind, it’s already next summer, and I am curled up in front of it and sobbing with happiness.

Monday:: Zuke scramble (BBQ’ed zucchinis, Walla Walla sweet onions, green beans, and sausage all cooked up together), and corn on the cob.  Oh summer, I love you.

Saturday:: We have my godson’s birthday party in the evening, so will eat there.

originally posted on August 2, 2015; Updated on June 11, 2018
10 Comments//Leave a Comment »
Categories: Meal Plan
« Previous PostIt’s Time For a Change
Next Post » And Now to Wrap Up “Bomb Dropping Wednesday”