Preview of today’s post:
1) Awesome Greenbox month
2) Four year olds are crazy stalkers
3) Something weird in my garden, and I need your help identifying it!

1) Mitchell from The Homegrown Collective sent me surprise box for this month.  Oh my gosh, when I opened it, I squealed like a little girl getting a pony for Christmas.  It was chock full of items to make homemade beauty supplies like lotion bars, milk scrub, and chapstick.  The ingredients are simple, they’re locally sourced, and they smell good and look amazing.  SO FUN!!!

This month’s Greenbox from The Homegrown Collective fulfilled all my deepest weird needs. 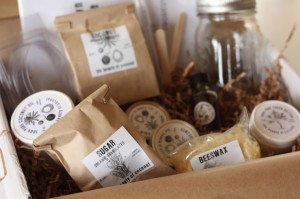 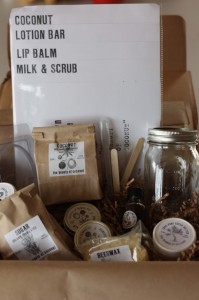 2) Jack is so freaking competitive these days that I’m ready to explode.  Is this a normal four-year-old boy thing?  Anyone?  We had an altercation yesterday over a game that we each thought we won.  I told him it didn’t matter who won because we both had a lot of fun.  He insisted he won, and I told him that if playing was going to be all about winning going forward, I didn’t want to play with him anymore.

I then headed into the bathroom, and the little turd followed me, looked me in the eye, and then slammed the door.

Back the truck up buddy.

Let me say that no hand was laid on the little psycho, but we are now crystal clear that slamming doors and reacting like a roided up baseball player is not kosher behavior in our house.

Additional competitiveness things?  He is obsessed with being someone’s only friend (he calls it being the “first friend”).  Take his cousin Parker for instance.  A few weeks ago they were at the park, and Parker saw someone he knew from daycare.  Jack straight up got between the two boys and screamed “he’s my friend” in this poor little boy’s face.

Steven Weber better watch his ass (and eye), because Jack is going all Single White Female up in here.  Parker better be glad he doesn’t have a bunny, or my little crazy pants might boil the shit out of it.

Someone, please tell me this is normal four-year-old behavior? 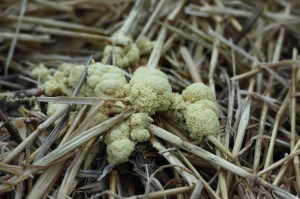 I went outside to the garden last night and found this near my chives.  It looks like cauliflower, but is squishy like puke (I did NOT touch it with my bare hands).  Did a cauliflower throw up in my garden??  Anyone?  Anyone? Bueller?  What is this thing?  If it helps in diagnosing the weirdness, it rained yesterday after no precipitation for over a month.

We have now gathered a grand total of three eggs.  They seem to come every other day, and always in the same nesting box.  The eggs have not increased in size, so I’m wondering if three different chickens have laid their first eggs, or if one of them is just squeezing out micro eggs?

Tuesday:: Chicken meatballs with rice, Asian green beans (just like this recipe, but with beans), and grilled corn.

Wednesday:: A recipe I found called “man pleasing chicken” that I want to try out.  Review will be next week.  Which I’ll write while wearing my pearls, poodle skirt, and waiting by the door with a drink for my man to get home (:eyeroll:).  We’re having grilled veg, and coleslaw on the side.  Have I ever shared my 2 minute coleslaw recipe with you guys?  I don’t think so.  I’ll get on that!

Thursday:: I’m working late, so Troy and Jack are being fed at the in-laws.

Saturday:: Homemade pizza and some veg on the side.

Sunday:: Family dinner with my parent’s and extended family.

originally posted on August 4, 2013; Updated on August 3, 2018
34 Comments//Leave a Comment »
Categories: Meal Plan
« Previous PostThese Boys of Mine…
Next Post » ‘Thar She Grows