I firmly believe that Christmas can be a wonderful and magical time to share homemade items with the ones you love.  Nothing puts a smile on my face more than watching a friend or family member open up something I crafted with my two hands, and fall in love with the gift.  It’s truly magical.

Too much has been going on in the last few weeks, and my work is insane right now, and thus, my Amazon Prime membership is getting a work out.  I’ll still put the gifts in homemade giftbags, and I’ll call it a day.   :confetti:

This Saturday I am having a baby shower.  The baby shower that I kicked and pleaded with others to not have.  I know the idea of a shower for a second kid is regional, and around these parts, it isn’t seen as weird.  But I still didn’t want one.  We have so much stuff saved from Jack, and now we have stuff from my nephew and some clothes from my cousin’s baby to boot.  People will say “well just let others buy you diapers”, but we have cloth diapers that held up fine and will be used again.  Or they’ll say “how about a wipes shower”, to which I say we have cloth wipes that are amazing and we still have loads of them.  We literally “need” like three things.  And the people in my life who would be invited to a shower are the same people who generously gave us gifts seven years ago.  My cousin recommended we have a “stripper shower”.  When I asked her what that entailed, she said they would drink, have some food, and throw dollar bills at me.

My boss asked if she could give me a shower along with a coworker, and I relented because I figured these would be work people who weren’t around when Jack was born.  And I said “absolutely no gifts”.  So I felt semi-ok with that situation.  Then they told me they wanted me to invite family and friends, and I instantly felt icky about the whole thing.  It’s not to say I don’t appreciate the kindness of the offer, but there are about 15 bins of clothes in my attic.  I have toys and baby items out the ass, and we’re just insanely blessed all around.

I did my best to keep it as small as possible, and made them put a note on the invites “Troy and Sarah are bursting with love…and stuff, and have requested no gifts”, but knowing the people I know, they’ll wipe their butt with that suggestion.  So if you know me in real life, and didn’t get an invite (Rae, Beeka, I’m looking at you two), it’s because the whole idea of it felt weird and I tried to avoid expanding the guest list.

Want to know how to instantly brighten someone’s day?  Ask the nice man at Whole Foods for a sprouting bag.  Then when he doesn’t know what that is, try to delicately describe to him the mesh bag that is used for straining homemade milk made from nuts.  When he still doesn’t understand what you are asking about, simply say “I’m looking for a nutsack”.  And then wait for 10 seconds as he acknowledges what you said, and then start to giggle with him.  And then full on belly laugh for two minutes. 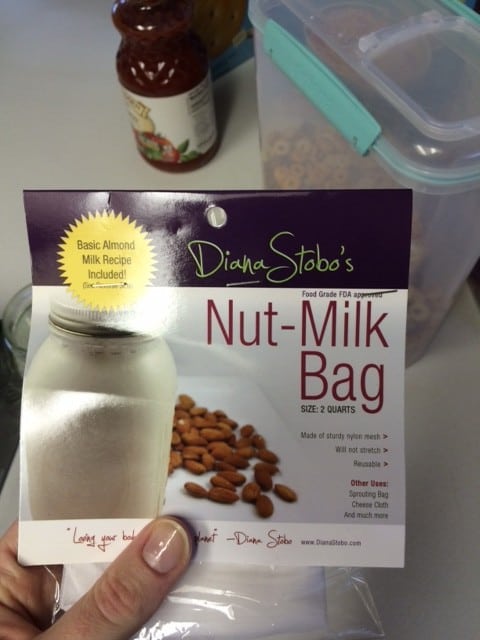 So yeah, this (cheaper option on Amazon) is in my house now.  Proud owner of a nutsack for making nut milk. With Jack’s dairy-free lifestyle lasting a minimum of the next three months, I needed to get creative with some of the products we use on a day to day basis.  Jack never drank cow’s milk, and around three stopped wanting to drink the coconut milk we were bringing home for him.  His doctor realized how healthy he was, loved the fact that his favorite drink was water, and said he was clearly getting enough nutrients and calcium from other sources.  So replacing “milk” is not an issue as a beverage, but replacing it for cooking, smoothies, and most importantly hot cocoa was a matter of urgency.

We started buying almond milk and were pleased with the taste, and Jack didn’t have any complaints about it.  The ingredients aren’t my favorite (there are a few fillers in there), but it’s ok and I’ll keep buying it.  However, I wanted to try my hand at almond milk yogurt ($1.99 for 4 oz of store-bought!!!!), but everything I’ve read said that it works better using homemade almond milk instead of the store stuff.  Thus, I needed to get myself a nutsack!  Plus, I mean, saying nutsack over and over is truly just a bonus.

I made the milk last night, and did a taste test comparison between the homemade and store-bought.  Both had a fine almondy taste, but even though the brand we buy at the store is unsweetened, it was soooo much sweeter than homemade.  Which leads me to ask, what in the hell are they putting in it?  I’m trying the yogurt experiment today, and of course will let you know if it turns out.  Because a) I love making stuff that my family enjoys, and even better if it helps Jack adapt to his new eating style and b) $1.99 for a freaking 4 oz container!!!!!

Jack seems to be about 90-95% back to normal, and is making up for lost time on eating.  We cannot keep this child full, and it’s been challenging to find things we had around the house to put in his food hole.  Friday Troy was home with him before school, and texted me saying Jack had eaten two pieces of toast, two eggs, and THREE peanut butter and jelly sandwiches for breakfast! I hit it out of the park yesterday morning with an almond milk, coconut milk yogurt, banana, cocoa powder, and peanut butter smoothie.  He was thrilled.  Also had oatmeal, an egg, and some cereal. 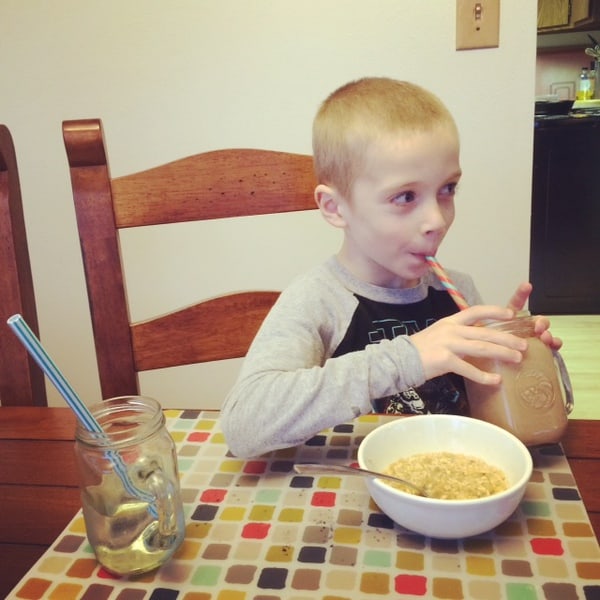 Most nights, it takes him a full two hours to eat dinner, because as soon as he finishes one thing, he wants more of something else.  Normally, our “go to” snacks for him are a piece of Tillamook cheddar, a whole apple, and if he still isn’t full we’ll give him dried apples or applesauce.  Since most fruit is off the table now, and cheese is a no go, we’re having to be creative.  And thus, you’ll poop when you see what I spent on groceries this week.  We’re talking my two week budget spent in one day, and then some.  I firmly believe that you can find a way to deal with food allergies in an economic way (we did when Jack was smaller, and our budget was even tighter!), and I plan to talk about that later this week.  BUT, we just so happened to be out of 50% of our staples around here, and bought way more “convenience” items than I would normally buy in a year, just to find something that Jack likes and will fill him up.  Once we can pinpoint things he likes, and his eating calms the eff down, I’ll be able to make homemade versions of some of his favorites.  Oh and to add to the expense, my stupid chickens have stopped laying for the winter, so I actually had to buy eggs. From a store!  I know!

Monday:: Homemade tomato soup (canned from the garden this summer), biscuits (these, but minus the cheddar, powdered milk, butter, and milk), salad.