This post is hard for me to write.  I don’t know where to begin, and I don’t know what to say.  My heart is having a hard time reconciling the news that happened on Friday.  I cried in the car on the way home, and snuggled my boy for as long as he would let me (about 5 seconds before a request of “stop squeezing me mommy so that I can go play”).  My heart is broken for the community and those families.  Nothing about this makes sense.

Jack asked why I was crying, and I said a very bad man hurt a lot of kids and adults.  He asked if it was The Joker.  I said no, The Joker was pretend, and this bad man was real.

Since the dawn of time, there has been violence.  There was violence before bombs, guns, the internet, and 24 hour a day cable news.  There has always been violence, and no matter how and what we legislate, there will still be violence.  And that makes me sad, and exhausted, and could lead to extreme despair.

Switching gears here, because frankly typing the above left me sobbing.

On Tuesday, we got the results of Jack’s sleep study.  I wasn’t too surprised to hear the doctor say “significant sleep apnea”, but I’d be lying if I said I wasn’t hoping it would be a different diagnosis.  After confirming that he wasn’t in any danger while he was sleeping, I made an appointment for January 2nd to see an ear, nose, and throat specialist.  This is going to be an expensive endeavor (we have high deductible insurance), so I want it to “count” for the next year.

The doctor who called me after reviewing the results has only met Jack for a few minutes.  Without really knowing Jack, he said that if the apnea wasn’t treated, “as he ages, he’ll become very hyper and have a hard time focusing in school”.  Become hyper?  That boat has sailed!  Jack has the energy of multiple kids, and exhausts me on a daily basis.

People like to say their kids have energy, but then they meet Jack.  My friend came to stay with us in June, and has always said her daughter was energetic.  After one hour of playing with Jack, her daughter sat on the ground and refused to move another step because Jack had exhausted her.

The likely next step after the ENT appointment will be a removal of Jack’s tonsils.  His tonsils are so large that they touch his uvula, and impact his sleeping and cause his extreme snoring (like a tiny bear cub with a chain saw).  The removal will hopefully allow him to have a restful sleep.  When adults aren’t rested, they crash and get super sleepy.  When kids aren’t rested, their exhaustion comes out in the form of being “active”.

I keep picturing “post surgery” Jack as a neutered cat, sitting quietly around the house, getting fat, and being a slug.  We’ll see.

This week I started and finished up this quilt for the daughter of my friend. 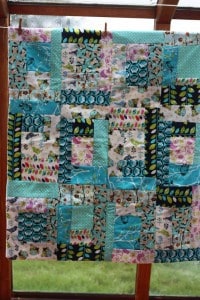 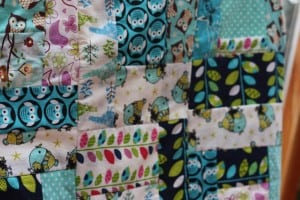 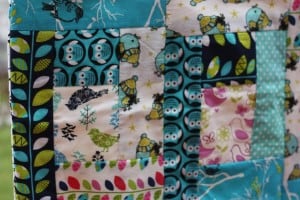 I have a confession to make…I haven’t planned what we’re eating until I started writing this sentence.  Here is what we’re having for dinner this week (maybe).  Reminder, I only plan dinners, because breakfast is always smoothies or eggs with something, and lunches are always leftovers.  We rarely eat dessert during the week, and our dinner drink of choice is water kefir soda.

Monday:: Baked potato soup.  This didn’t get made last week because I was too tired and made popcorn instead.  Go me!  With the soup, we’ll have roasted Brussels sprouts, and some fruit.

Wednesday:: Breakfast for dinner.  We’ll figure out what that means Tuesday night.

Thursday:: Popcorn dinner!  Jack won’t be around on Friday, and I’m off work on Friday, so Thursday will be our “Friday”.

Friday:: I have no freaking clue.  My sister and I started a new holiday tradition where we swap kids for a night.  Friday, my sister and brother-in-law are taking Jack overnight so that I can focus on last minute Christmas presents and doing it alone.  Sunday, we’re taking my nephew so that my sister can do the same.

Saturday:: homemade pizza, salad from the garden, and if you guessed fruit, you’re correct!

Sunday:: family dinner at my parent’s.