Back to the ER for Jack on Friday.  If you follow me on Facebook, you saw the whole craptastic day play out.

I am definitely the under-reactor between Troy and I, but before Jack had even finished throwing up, I was packing for the ER.  Even Troy was like “you’re going to the ER”??? and I was like “I’m going to the ER”.  The puking brought back so many emotions for me; not knowing what is going on with my kid, watching him be in pain, and not having any answers.  And so I was like “eff it, I’m taking him back to Mary Bridge”.  It definitely isn’t the closest hospital for us, but it is where he was admitted and treated, and thus we drove there in pounding and pouring rain, hydroplaning almost the whole way.  Side note, do any other Seattleites find it a personal goal to never use the fasting setting on their wipers?  I seriously consider it a failure if I have to turn them on.  Friday morning though, I needed them.  It was raining that hard.

He puked more in the car (in a bowl), and then proceeded to do it every 10-30 minutes until 5:30 am.  The Zofran they gave him?  He puked it up.  His tummy pains started up again while we were there, but thank the good Lord they were not at the same level they had been previously.  He hadn’t eaten any dairy or anything weird, and had been doing pretty great for two weeks, with some discomfort here and there. 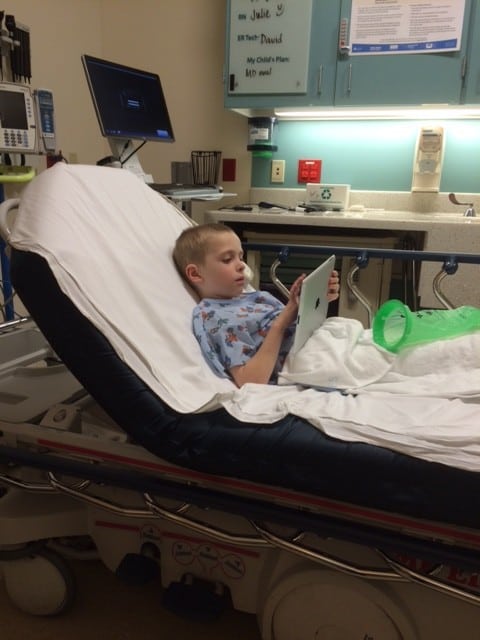 We were there for almost 13 hours, did more x-rays, ultrasounds, and both an upper GI scan and small bowel scan.  And we have zero freaking answers.  No clue why this would come back when we were doing everything right.  So freaking frustrating!  At one point, I told one of the nurses that with our notebook full of symptoms, treatments, visits, etc., we looked like those parents who suffer from Munchausen by Proxy (the disorder where parents make their kids sick so that the parents receive attention).  She told me that “no, we look like parents who have their act together, care about their kid, and are frustrated with lack of results.

When we were initially admitted two weeks ago, they did a bunch of bloodwork on Jack.  One of the tests was an IGE marker which checks for allergens in the system.  It can’t tell you what you are allergic to, but it can tell you that something in this body is fighting something.  They said they want to see the number at 150…and Jack’s was 6,700!!  We see an immunologist on December 31st, and his job will be to figure out what the hell it is that causes Jack that kind of reaction.  Poor buddy has to do the scratch test and then be observed for reactions.  Whole thing takes about three hours. We’ll bring the Kindle so he can watch a movie, and will be making the afternoon a “fun” family day by going to the movies or maybe the zoo.

We had amazing care at the Mary Bridge Children’s ER, and were blessed to be partnered with great nurses.  Jack was once again prevented from eating or drinking for hours and hours, and was again as furious as a honey badger.  When we finally got the go ahead to eat something, he was not impressed with the selection at the ER.  He thinks Gatorade is gross, many of their snack were full of extra sugar and dairy, and he wanted nothing to do with saltines.  I went to the cafeteria to get him something; the cafeteria that is being remodeled.  They only have a very limited selection of anything due to the remodel, and the low-sugar dairy-free selection was abysmal. I brought back an Uncrustables, a banana, and some pretzels.

Jack unwrapped the Uncrustables, and then looked at us like we were joking about it being food.  He took a bite and declared it nasty.  He informed me the pretzels “weren’t as good as Newman’s Own Organic Mighty Minis”, but gobbled up the banana and asked for more.  We need him to eat more than just fruit, because they had to monitor his body’s reaction to food.  We convinced him to eat the Uncrustable (I believe my exact words may have been “if you don’t eat the stupid sandwich, you have to stay in the hospital for Christmas”.  Go me.) and I promised him I would go look for more food.

I was out talking with the nurse and she asked what he liked.  I mentioned he was crazy for satsumas this time of year (mini oranges) and she reached in to her own lunch bag and handed me one she had brought for her lunch.  Oh nurses (the good ones), you are amazing.  So special, and the power force behind the healthcare teams. 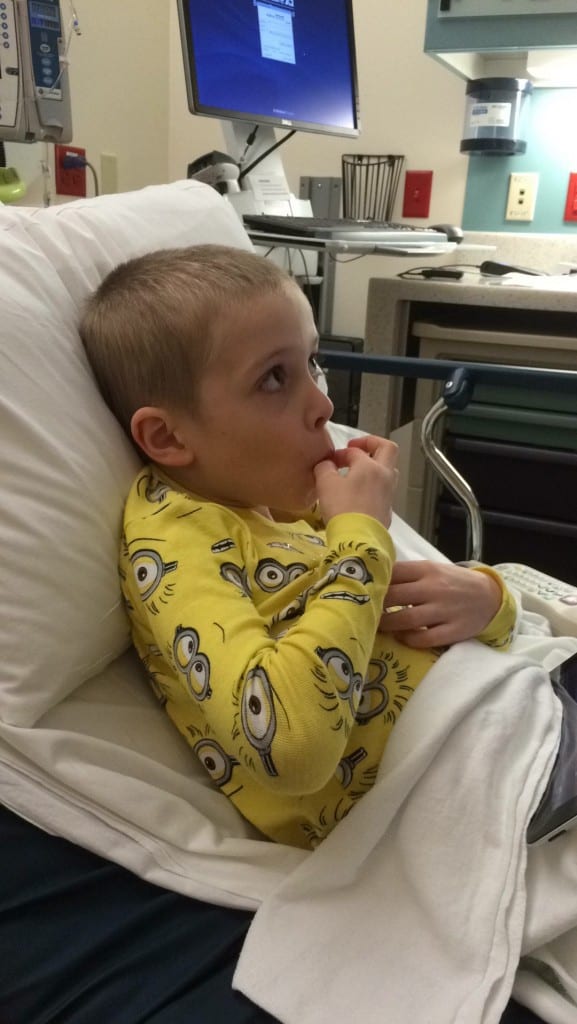 Happy boy with his satsuma

We were discharged around 2 pm, and were exhausted when we got home.  I sent Troy off to nap, and told Jack I would read to him if he laid on the couch.  Four chapters of Captain Underpants, and he was passed the hell out.  This kid does NOT nap even when sick, but we had been up since midnight and were just wasted.  Sadly, I think I napped for 10 minutes and my body was like “nope”. 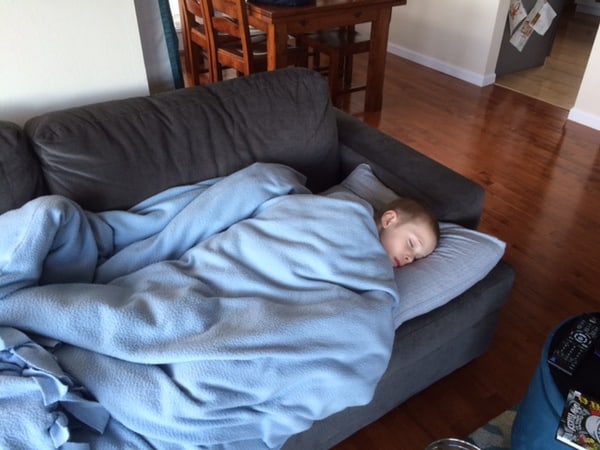 We keep hoping for a long-term fix and a healthy kiddo very soon.  We’ll figure it out, but the frustration leading to those answers is tangible.  And I feel like I have a ticking timeclock in my uterus to FIND ANSWERS SOON!!!!

Despite the ER visit, and a long day, I decided to go ahead with the baby shower that was being held on Saturday.  The hosts offered to cancel or delay the shower, but in all honesty I have no idea when Jack will be “fixed”, so I believe my response was “eff it, let’s party”.  It was a lovely day, and super low-key which is exactly what one would want (when one doesn’t want a shower in the first place).  I was impressed to see that 90% of attendees followed my request of “no presents please”, mixed with the note from the hosts that “books are ok”.  We received so many wonderful children’s books for both Jack and Bennett alike.  I have a feeling they will all be “pre-screened” by a very proud big brother to be to make sure they are appropriate for “his little monkey”.

We also received carseats (after an insane amount of research, we decided on this one for its safety and the fact that it has the narrowest base on the market), an Ergo, some bottles, a nursing scarf (we’ll see if it works.  I had a cover with Jack, and he loved to lift it up and pretty much yell “look what’s going on under here), our baby monitor, some wooden teething toys I had fallen in love with (this one and this one), a few blankets, and some clothing.  And then there was some homemade knits.  Or rather crochets.  Like a blueberry hat. 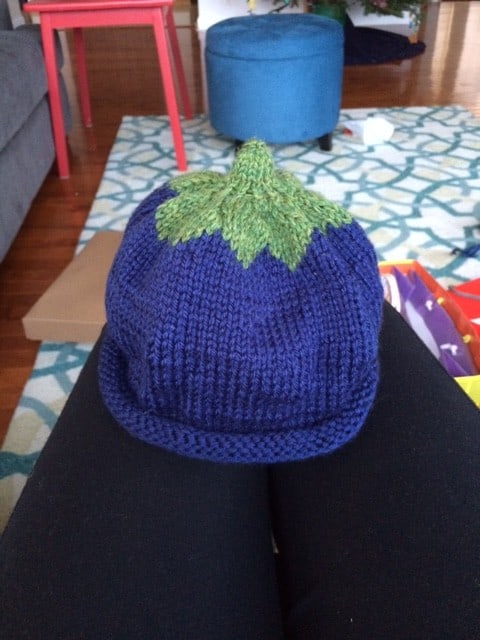 And this tiny fisherman’s sweater that I just can’t even deal with because of the cuteness.  My coworker made both the hat and sweater, and I’m just in awe of her skills. 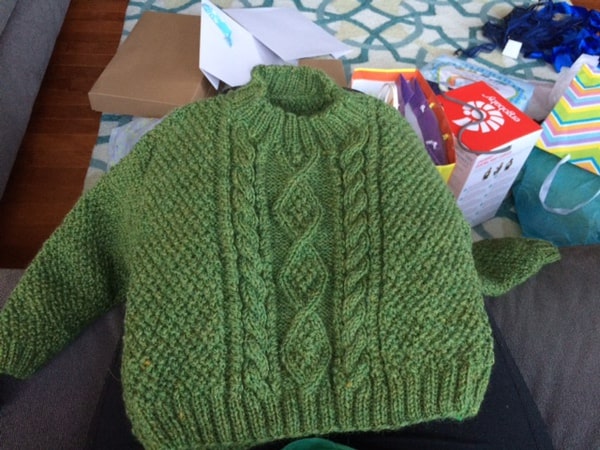 And while these aren’t homemade, these baby hipster moccasins have destroyed my resolve to not buy baby shoes (Jack rocked socks or slippers in cold weather until he could walk.  Do I need to buy baby cans of Pabst Blue Ribbon, and get him some black framed glasses and skinny jeans now? 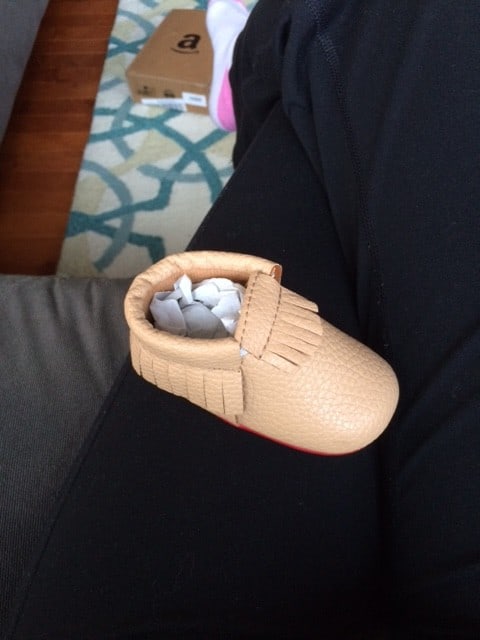 Delicious food, amazing company, and a gorgeous setting.  It turned me in to a convert to being ok with having the shower thrown for me.

Wednesday:: Roasted chicken, mashed potatoes (because I want them desperately), and a veg that I will select at the grocery store later today.

Thursday:: Christmas eve at my in-laws.

We haven’t purchased any groceries yet, and will be hitting up the stores after church.  I blew my budget last week, so maybe I’ll just shoplift everything this week.  I’m already likely on some alert system at the kid’s hospital, so go big or go home, right?