Tis the end of the year, and the eatin’ is fine.

Here is what my family will be enjoying this week!

Monday:: Christmas dinner at my parent’s house.  My dad is trying to deep fry a turkey for the first time.  When he asked us all what we were bringing for dinner, my sister said “a video camera and a fire extinguisher”.

Thursday::  meeting up with an out of state friend (and one of Jack’s god mothers!) in Seattle

Saturday:: Let’s be honest, Jack and I will probably walk to the library, get a cartoon DVD, and I’ll make popcorn and we’ll have “dinner” and a movie on the couch.  I’ll add a bowl of apple slices to make it a healthyish dinner.

Sunday:: dinner at my parent’s.

This was a stock up week for me!  This week I spent $3.50 on raw milk from a local farm, and $13 in organic eggs from the milk man.  $28.28 from Trader Joes for a ton of brussel sprouts for Monday’s Christmas dinner, frozen asparagus, asiago cheese, and 2 frozen mac and cheeses (I’m not a machine people.  That stuff is GOOD).

Two funny Trader Joe’s stories:
1) I realized during our trip to TJ’s that my aunt and Jack must be frequent visitor’s as the sample lady knew Jack by name.  HA!
2) Jack was playing with the flat wedge of asiago that I picked up.  He was flying it around the cart and making motor noises.  He said “mommy, guess what this is”?  I said “an airplane”?  He said “no mommy, it’s ASIAGO.  Pay attention!”  Brat. 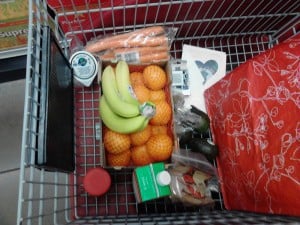 I came in $37 under budget for the month for groceries.  Excellent, considering the repairs to Troy’s truck were $684. Blerg.

One comment on “Meal plan for December 26th-January 1st”