I’m not someone who believes in jinxes or that saying something aloud can change the course of events.

But just in case…the next few sentences I am about to write are blank, m’kay?

At the time of writing this blog post, Jack hasn’t thrown up or spent hours screaming in the middle of the night for three days.  Three whole days of not wanting to rip out our hair because it’s so hard to listen to someone so little be in that much pain.  We even put his trundle back under his daybed, and have slept in our own bed for a night.

So weird that the above section of this post is blank, right?  RIGHT?

We’re taking things day by day, and have no idea why things have reversed in the positive direction, but we’ll take it!  We had a good 10 days before and then he reverted back to horrible pain/reactions, so we can’t say we’re out of the woods or anything, but we are thankful for the good days.  Next steps are maintaining Jack’s current special diet, a visit to the immunologist on New Year’s Eve (day), and then a follow up with the pediatric gastro on the 8th of January.

If you follow me on Facebook, you’ve already heard about my emotional breakdown in the middle of the grocery store on Christmas Eve.  We had planned to take Jack to see Santa a few times, but a horrible night, or pain episodes during the day, or another ER visit kept getting in the dang way.  We finally just accepted that a visit to Santa was not in the cards for 2015.  On the afternoon of Christmas Eve, Jack and I were running a few last minute errands in a town that is about 45 minutes away from us.  Truth be told, I had received a gift at my shower from a store in the town, and wanted to exchange it.  And there is a kick ass grocery store up there too that has specialty items I can’t find any closer.

So, we were walking down the main street looking in shops and looking for the store to exchange my shower item, and I see this random little hut in the middle of the sidewalk across the street.  I walk a few more steps and who should I see sitting there, but Santa Claus himself!  Jack and I dart across the street (in a crosswalk of course), and march right in and Jack got to spend five minutes alone with St. Nick. 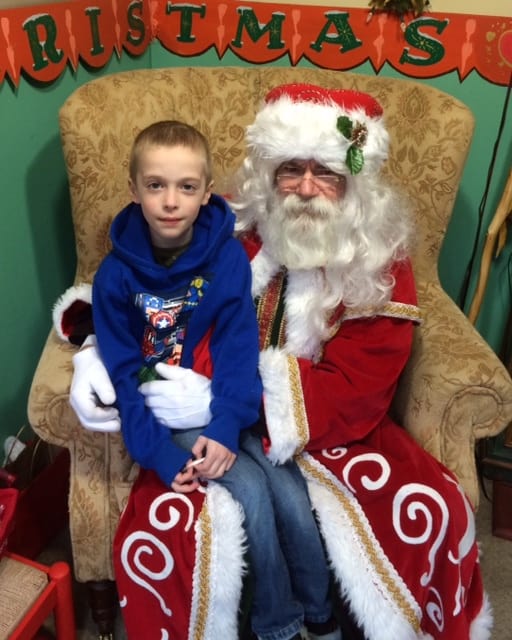 He looks so skinny to me, and the circles under his eyes break my heart, but man, it was so nice for him to do something normal!

We then went to the super cool grocery store against Jack’s protests.  He loves this store because they give out amazing cookie samples at the bakery, and he knew that he wouldn’t be able to get one this time.  I told him we would ask at the bakery if they had samples that didn’t include butter.  We talked to Carol at the bakery counter, and she said unfortunately all their cookies had butter in them.  She then led Jack by the hand to a section near the bakery that had packages of allergy-free cookies.  She held out two options and let Jack choose one.  While he was busy picking out a double chocolate cookie, I glanced at the price of said cookie and it was a whopping $2.99! For ONE cookie.  She took the cookie out of the wrapper, gave it to him, and wished us a Merry Christmas.  It made Jack’s whole week.

After checking out with our other items, I tracked down a manager because someone had to know about this gem of an employee they had.  I started telling the manager, but then just started freaking sobbing in the middle of it because a) I was so touched at the kindness of the lady in the bakery b) I’m tired as hell from no sleep and the last five weeks and c) I’m 35 weeks pregnant.  I’m pretty sure all the manager could hear was “Carol”, “bakery”, and “butter”.  I felt like a total moron, and Jack started getting concerned and in a worried high-pitched voice yelled “why are you crying mommy”.  I think I need to send a letter or email to the store manager because I’m sure they thought Carol  did something horrible to me.

How was your Christmas?  As usual, we had three whole days of Christmas between our two families.  We’re used to it by now, and even though it is super fun and wonderful to be around everyone, a day of recovery afterwards is well-appreciated.  Troy worked Christmas Eve day, which means he wouldn’t get off of work until 8 am (ish) on Christmas day and then a 90 minute drive home.  Turns out the guy working the following shift doesn’t have any kids, and offered to come in super early so that Troy could be home by 6:30.  It was a nice surprise, though weird as hell to hear him coming through the front door almost three hours earlier than expected!  Jack bounded out to the living room, and was a bit dismayed to see that Santa had forgotten to put anything in his stocking.  “What a rip off” was the reaction I believe.  Santa was tired this year buddy, and will make up for it next year.  Santa will have his shit together in 2016.

Jack was pleased to see that Santa enjoyed the dairy-free cookies and almond milk we left him, and the reindeer chomped on the carrot and apple we put out as well.  Jack then proceeded to eat the rest of the apple, despite me saying “that has Rudolph slobber on it”.

Bennett got Jack a chemistry set and “real” chemistry supplies that he has been lusting after for months. 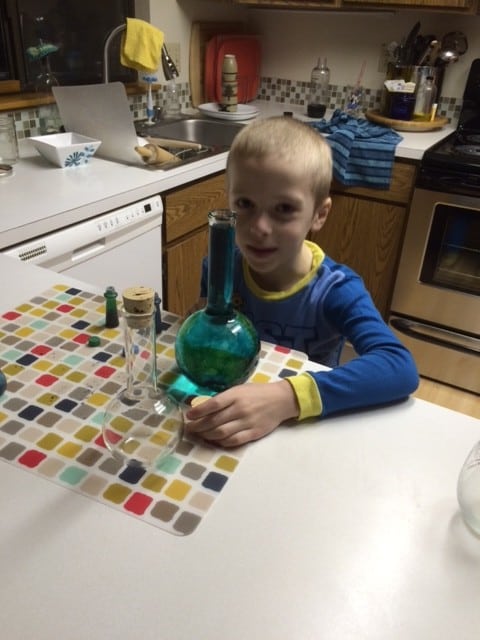 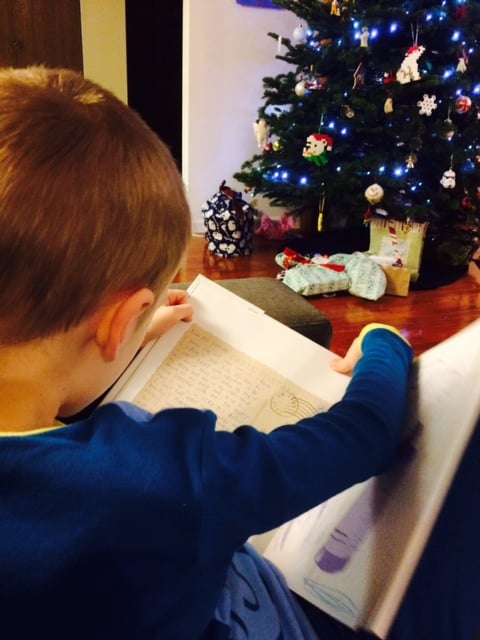 And a giant Nerf gatling gun from his Auntie Anne.  The gun sounds like a breast pump to me.  Who knew that Medela made Nerf guns? 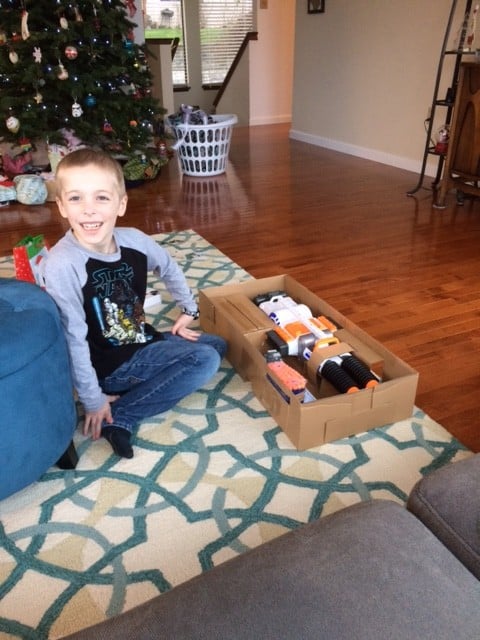 There hasn’t been a smile on this kid’s face that big in weeks!

Santa also got him a Darth Vader rug for his bedroom, because Santa is sick of listening to him complain that his bare butt is cold while he gets dressed in the morning.  It has been pointed out to him multiple times that he could just sit on his bed to get dressed, but noooooooo!  And finally Santa couldn’t deal with it anymore and solved the problem with a damn rug. 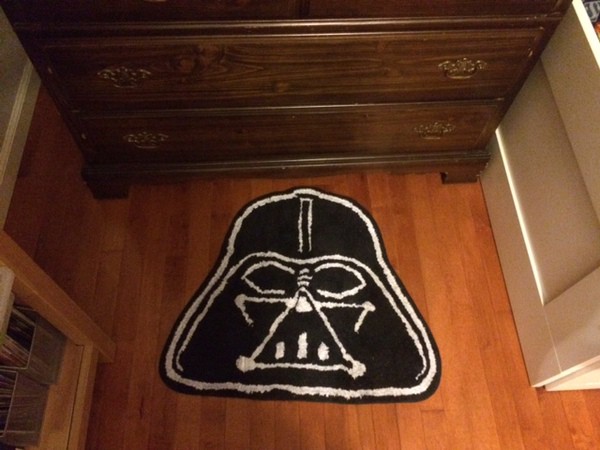 I would post a meal plan for this week, but I’m off Wed-Fri, and frankly can’t get interested in actually creating a meal plan.  I’m serving bread and soup on Monday, and then working late on Tuesday to make up for all the damn work I have been missing lately, and Troy said he would just make breakfast dinner.  Wednesday, Thursday, and Friday are a pure cluster eef at this point, and I might just serve cereal, oatmeal, and popcorn every night.  Because I can.  And my give a shit is broken right now. Boom!