So remember that time I almost got in a fight with a grandmother at JoAnn Fabrics?  I remember it like it was yesterday.

Because it was yesterday.

To set the scene a bit, understand that I dropped Jack off with Troy’s cousins for one hour so that I could get fabric for his Christmas gift alone.  I was in a rush, and I ran in to find the line at the cutting counter about 20 people long.

They were out of carts, so I buzzed around like a crazy person, stacking bolts of fabric in my arms until I could barely see anymore.  Knowing that time was of an essence, I got in to the very long line.  A kind JoAnn’s employee found me a cart, and I was relieved to put down the heavy load.

After a few minutes of the line not moving, I decided to keep my cart where it was, and run to the yarn section which was one aisle over; we were really deep in to the store!  I knew the brand, the weight, and everything I wanted, so I darted over to grab it.  While I was heading back, I realized the woman behind me had one tiny little thing of trim she needed cut.  With the thought of “when I get back, I’m going to tell her to go in front of me”, I sprinted to grab my yarn and was back in about 24 seconds.  My cart hadn’t needed to move an inch in my absence.

And then?  The wind whipped up, the trees started blowing, and the shit storm hit the fan.

I was turning around to tell the kind old grandma behind me to go in front of me, when she unleashed a verbal assault that would have made most people blush.  My face went hot and my ears started ringing (because I HATE drama, conflict, and confrontation), so I don’t remember most of it, but the jist was basically I am worse than a war criminal because I left the line at the fabric counter to continue my shopping, and that I should be stoned to death for such an infraction.

I said “actually ma’am, I was just going to tell you to go in front of me.  I’ll still allow that even though you are being extremely rude”.  She then continued her tirade that was basically alluding to the fact that if someone with herpes chewed some gum and spit it out on the ground, then Sasquatch took a dump on it, I should be so lucky to be able to pick it up and chew it.

At that moment, I had an internal dialog to weigh my options that seemed to cover two hours, but in actuality probably was about 10 seconds.

Option 1: be polite, stand my ground, and be able to look my pastor and fellow church-goers in the face tomorrow.

Option 2: pick up the bolt of spiderman fabric and beat this bitch down until I broke her hip.

I really wanted to exercise option 2, but took three deep breaths and went with option 1.  But not without a bit of “kill them with kindness” sass.  When it was my turn, I turned around to the soul-sucking she devil and said “you’re still welcome to go in front of me ma’am”.  She threw eye bullets at me and loudly proclaimed “oh no, we’ll ALL JUST WAIT FOR YOU”.  As she was leaving the cutting counter, I sweetly said “ma’am, I hope you have a fabulous Christmas, because clearly you had a terrible Thanksgiving”.

Not my finest moment, but not my worst.

After the hell beast left the store, four people came over to me to tell me how well I handled myself.  I said “oh thanks, but I couldn’t call myself a Christian if I went down to that level and engaged in rudeness.  I don’t know that woman’s life; maybe she just got horrible medical news, or maybe she doesn’t have any family near her for the holidays” (internal dialog: maybe she is such a bitch that she does have family, but no one wants to be around her).

The four customers all told me they wouldn’t have cared about that, and would have “slapped a bitch”, but that I should be proud that I wore my big girl panties that day and was able to be the adult in the situation.  One woman gave me a hug and said “don’t let that woman ruin your day”.  I hugged her back, and said “don’t worry she won’t.  Now I have an interesting story to tell my blog readers”.

In slightly happier, and less aggressively attacking octeganarian news, Thanksgiving was absolutely fabulous this year.  Like free fabric, no evil people, no line at JoAnn’s fabulous.  The little cousins (7, almost 7, 4.5, and 4.5) played so well together.  Us parents were able to just chill while the kids played entirely unsupervised in the basement.  They had a blast, and so did we.

My mother-in-law set up a table prior to dinner with gingerbread men crafting materials, and the kids attacked with gusto. 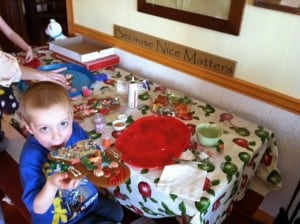 I contributed homemade rolls and a red velvet cake to the event.  After I was halfway mixing up all the ingredients for the cake, I realized that of course I had forgotten to buy buttermilk during that week’s grocery stock up.  Some fast thinking made me feel a bit like a kitchen MacGwyver.  I had stopped at the farm on the way home that very day to get some raw milk, so I skimmed the cream off of the top, and put it in my food processor for about 10 minutes to make butter.  I strained it out and was able to get just enough buttermilk for the cake and it turned out beautifully.  Phew!

The only thing not beautiful about the cake was my janky transportation system.  I’ve never made a cake that needs to be taken anywhere, so I had to cobble together a homemade solution.  Behold: 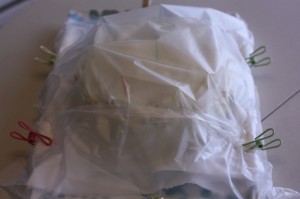 A platter, with the cake on top.  The cake has toothpicks in all directions to keep the plastic wrap off the frosting.  The plastic wrap is held in place with IKEA chip clips and clothes pins.

I had some amazing luck at Goodwill this week.  Not one, not two, but three awesome shirts for Jack for a total of $7.  My in-laws call Jack Sheldon (ala The Big Bang Theory) because Jack is very particular about his shirts.  I have had a shirt thrown back at me, and with tears in his big accusatory eyes, I’m told “that does NOT have a picture on it mommy”.  Pfft.  For year olds! 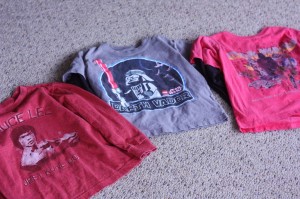 Thursday:: My in-laws feed us.  Hurray!

Saturday:: African chicken stew (a recipe I ganked from a magazine YEARS ago, have never made, and am now going to try it), and bread.

I completely blew my grocery budget this week.  I don’t even want to add it up.  Next week we’ll be eating heavily from the freezer.  Like HEAVILY.