Friday night was like a rave in our house.

I mentioned last week how I blew our grocery budget, and that grocery shopping the next week (this week) was going to be tight.  I wanted to make a soup with some little pasta that I had bought awhile ago, but my pantry was a bit of a mess and I couldn’t find it.  Jack was in the tub, and Troy was in the bathroom with him, and came out to find half of the pantry on the floor, and me deep-cleaning it on my hands and knees. 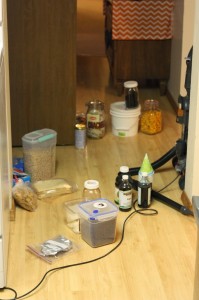 He just shook his head, went back in to the bathroom, and kept his mouth shut, because he knew once I’m in that mood, nothing shall stop me.

And I found the pasta! 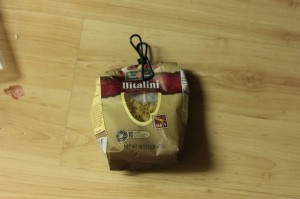 I headed to the garage after Jack was asleep to rearrange the canning jars.  I canned some apples a few weeks ago, and kinda just put them wherever I found space, but as any Type A person will tell you, that is NOT ok.

As is our desk, which was tidied up first thing Saturday morning.

Just like a rave I tell you!  Minus the Ecstasy, Molly, glow sticks, and you know, excitement.  But other than that, totally just like a rave.

Saturday was a day spent running around and not really having a relaxing weekend.  My dad (our landlord) wanted to have French doors installed on our deck.  Once the gimps (my parents) move in with us next year, there will be access to the house from the deck.  The current sliders are 43 years old, and not so wheelchair friendly, hence the French doors.

The timing was impeccable, as Saturday was the coldest day of the year at a toasty 25 degrees.  Troy tarped off the dining room where one set was being installed, and it kept the house at 60 degrees despite a giant hole in the side of the house.  Also, we totally looked like we were shooting a scene from a serial killer movie with all the plastic sheeting.  So we had that going for us.

We headed out in to the frigid tundra to go get our Christmas tree, and it was quickly apparent that one of us was prepared for the weather.  That person would be me.  :bows:  I grabbed a warm jacket and hat for Jack, and a pair of gloves, only to find out we had just brought one glove.  Troy assumed that a Carhartt jacket and stocking cap was sufficient for himself.  I was in a warm coat, gloves, scarf, and boots, and it was kind of like that scene from Dumb and Dumber where Harry is so cold, and Lloyd offers him an extra pair of gloves because he was getting too hot. 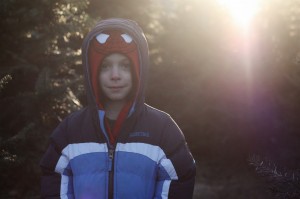 Saturday night found us at the town’s tree lighting ceremony.  Let’s just say that everyone else was a bit more appropriately dressed this time.  Ahem.

Sorry for the radio silence this past week; it was a doozy.  I had my final for my business class on Thursday, and spent most of my evenings studying for that.  I have a 98.5% going in to the final, so I am hoping for a solid A when grades are posted.  Also, I had to work until 7:30 pm on Tuesday, so that kind of cramped my style.

Wednesday I had the day “off” so that I could go have minor “surgery”.  I had some tumor bumpy things on my head that I refer to as my “scalp skittles” and we had finally met our insurance deductible for the year and I wanted those things gone!  The procedure was about 15 minutes past my work and Jack’s daycare, so I had the brilliant idea of spending the day at my in-laws house while they were at the ocean.  They live on the side of town where I’d need to pick up Jack, so from a back and forth and gas usage, it made complete sense.

I walked in to their house only to find the doors on their deck wide freaking open.  I called them, and with a golf club in my hand, I looked all over the whole house to make sure nothing was missing, no freaky Jason (name that movie) killers were in the house, etc.  The cold air pumping in to the house for five days left the furnace totally busted, so I spent a few hours watching Property Brothers on the couch in a 46 degree house.  I tried studying for my test, but I was working on my study guide on the computer and it was so cold that my fingers weren’t working so well.  I’d nuke a mug of water, snuggle up to it until my hands thawed, and then would type for a few minutes until my digits froze again.  Lather rinse repeat.

It’s a good thing I was wearing a sexy hat from my procedure, because that helped keep me somewhat warmer! 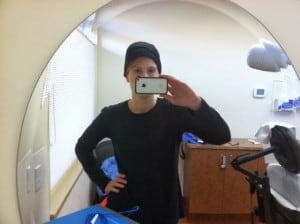 What they don’t tell you after surgery on your scalp is that they’re going to put about 15 gallons of Vaseline on your hair.  As of this post being written, I have washed my hair 12 times, and I still look like Ponyboy Curtis from The Outsiders.  I’ve even gone so far as to sprinkle baking soda on my hair to try to absorb all the extra grease.  Thankfully with the frigid weather, no one really questioned the fact that I was wearing Jack’s owl hat at work for two days.  Damn my kid has a huge head.

Monday:: Mystery soup.  I have some carrots and celery that are getting a little squishy, some onions, chicken broth, white beans, and the pasta that I so desperately searched for.  Served with salad, and maybe some bread if I can rustle it up.

Wednesday:: This ginger cilantro fish recipe, but with some frozen cod I have in the freezer, Brussels sprouts, and salad.

Thursday:: Dinner at my in-laws.  Hurray!

This week I was much better with my budget, even though I was already over budget for the pay period.  I spent $3.50 at the farm for raw milk, and $18 at the grocery store.