1) Anyone who loves The Mentalist (like me), rejoice that CBS now is streaming full episodes!  I’ve been waiting for this for two years!  I can’t stay up until 11 to watch it on CBS (CBS is one of the free channels we get on our TV), and until recently, they only showed clips online.  Hurray!

2) Jackie got his big boy bed this weekend.  He LOVES it, and sleeps great now that he has more space amongst his 539 stuffed animals.  This is now a thing of the past. 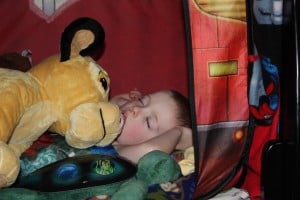 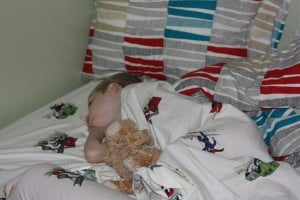 3) Saturday, Jack and I spent about two hours playing with power tools as we took down two huge and nasty bushes in front of our house.

But if you simply ask a 3 year old if they would like to use a sawzall, the answer is pretty much a guarantee.  Don’t worry, I had my hand on it the whole time; he only got to pull the trigger.  We only got through the cutting of the bushes before it got dark.  Hopefully next weekend, I can dig out the roots to prepare this area for blueberry bushes in spring.  Removing nasty inedible bushes and replacing them with something that will save us money is a huge win in my book.

I’ve been so unmotivated to meal plan lately.  I’m completely lazy these days.  I wish I had a wife.  She would do all of this for me.

I only plan dinners, because breakfast is always smoothies or eggs with something, and lunches are always leftovers.  We rarely eat dessert during the week, and our dinner drink of choice is water kefir soda.

Monday:: French onion soup (seriously, this has been on the menu for THREE weeks and has yet to get made.  We were going to have it yesterday, but I decided to clean out the fridge instead.  The soup will be paired with a salad.

Tuesday:: Fish, salad (or Brussels Sprouts if I can find them at Costco later today), and homemade garlic bread.  I have the fish in the freezer, and will be making it like my mother-in-law made some last week.  If I don’t screw it up, I’ll share the recipe!

Wednesday:: Veggie soup in the crockpot, salad, and bread.

Thursday:: Dinner at my in-laws.  Yay!

Saturday:: Super secret date night.  Which is another way of saying, Troy and I are going out, and we don’t know where.  But the fun part is, he doesn’t know we’re going out!  I arranged everything with the in-laws.