I swear we’re still alive over here.  I keep meaning to get on the ole blog and finish Bennett’s birth story (I’m so close to having it done), but there is so much Top Chef to watch on Hulu, a baby to snuggle, and oh the whole “I ended up in Urgent Care last weekend with a 103 temp” excuse.  Oldest one in the book.

Last Friday, my face and sinuses were killing me.  I assumed it was because panther jaws and his latch were so painful, that I was clenching every time he started to nurse.  At 2 am on Saturday, I woke up shaking and shivering like a whore in church.  My entire body was in convulsions.  I assumed the house was too cold, so adjusted the thermostat and crawled under the comforter and pulled it over my head.  A little bit later, Bennett started fussing for a top off (boob), and when he latched on, it took everything in my power to not launch him across the room.  The pain was insane!  I decided right then and there to pump on that side for 24 hours to give “lefty” a break.

All day Saturday I felt like a hot freaking mess.  When I would pee, pulling up my pants afterwards felt like I was scraping all the skin off of my legs.  Every joint in my body was aching and it was like someone had hit my shins with a sledgehammer.  It was not a fun feeling.

I was texting with my friend Anne and she suggested that maybe I had a fever.  I said “nope”, but then realized that perhaps I did.  I took my temp and it was 101.8.  I took it again and it was 102.8.  I called my midwife and she was basically like “get to Urgent Care now”.  So we went. And my bad ass “med-free” labor self was sobbing like a little bitch in the lobby.  My head was on fire and I thought it would explode.  The chills were so bad that I had a swaddling blanket wrapped around my head and neck and I was shivering like a crazy person.  Bennett started fussing, and I had Jack ask the nurse at the front desk to see if there was a room where I could nurse.  Bennett and I are not great public nursers, and the idea of trying to nurse him under a cover in a lobby full of sick people while wrapped up against the chills just was not my idea of a pleasant afternoon.

She took me back to a room and said I could just stay there because “I was going to bring you back ahead of the other people anyway”.  That is how pathetic I looked.  Later, she came in to take my vitals and asked what my pain level was.  I said “5, but I’m really tough” as tears rolled down my cheeks and I shook violently.  Oy.

The doctor came in (and she was pretty young), and I’m not sure if she has kids or not, but I probably scared her away from every breastfeeding.  The poor thing gasped a little when she saw my shredded nips.  She prescribed me some antibiotics and heavy-duty pain meds, and god bless modern medicine, I started feeling better within a matter of hours.

My midwife had already told me to pretend I had the flu for two weeks, so I was further encouraged to sit around and do nothing.  Which is torture for me.  I’ve pretty much being trying to take it easy ever since, and am doing my best to rest and let me boob heal.

Helping Jack with his valentines. 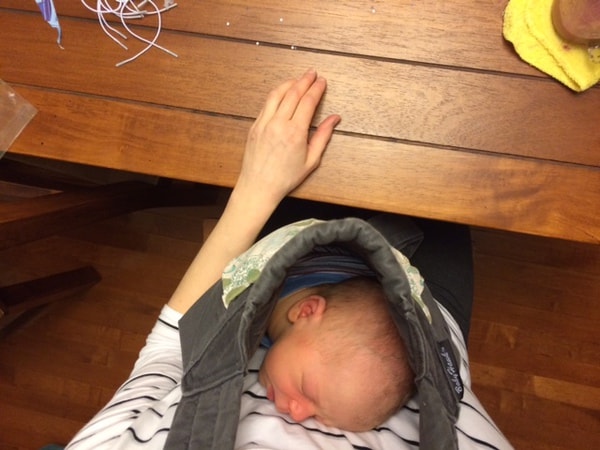 Best buds.  Jack and I look so much alike, that whenever I see this photo, I think for about .4 seconds that is me, and not Jack.  And then I get angry that I don’t have Jack’s eyelashes. 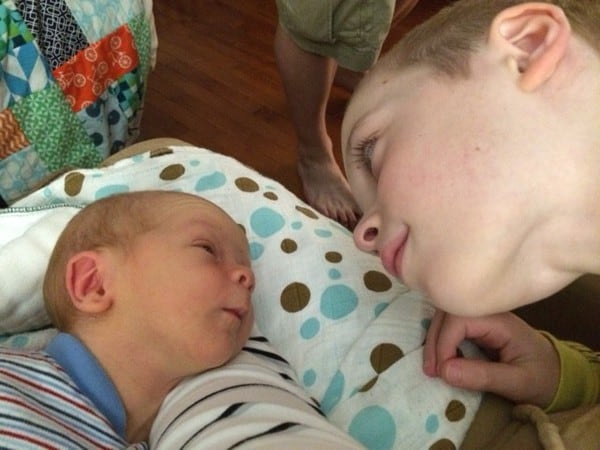 Monday:: Kebabs.  We had these a few weeks ago and they were great!  Troy grilled chicken, potato, onion, and pineapple on skewers, and dang they were tasty.  We’ll serve them with rice, and pot stickers (if I can find more of the organic ones at Costco tomorrow).

Wednesday::  Chicken and dumplings using leftover chicken from the night before, salad

All grocery shopping will take place tomorrow.  We’re going to church for the first time in two weeks today, and then Troy’s cousin and his family are coming over to meet Bennett later today.