This week is very sparse for us in terms of dinner.  I’m either working late, we’re getting our taxes done, or we have a dinner banquet thingy to attend.  We’re hardly home at all this week!

So, I’m only making buffalo chicken wraps with sweet potato fries and home canned pears, or yakisoba again.  I’m going to make a big batch of mac and cheese for the week for lunches and various late dinners.  Organic cauliflower was on sale this week, so I’m going to roast it with some carrots and then puree it to add to the mac and cheese.  I’ve never tried it before, so shhhhhh don’t tell Jack!

I also spent $17.96 of my grocery budget on four toddler hoodies that were clearanced out for $4.49 each.  I then spent $1.23 on felt at the fabric store to turn these in to 4 birthday presents for various kiddos in our lives.  Intriqued?  If the project turns out, I’ll be happy to share the details.  And if it doesn’t turn out, just forget I ever bought the stupid things. 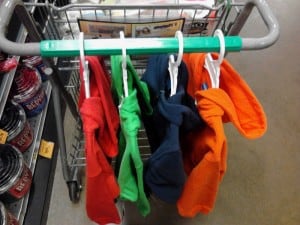