I fell in love on Friday.  Jack took me out for Happy Hour (i.e., $3 hummus plate for me and $3 chicken fingers for him), and the waitress gave us a pack of Wikki Stix.  After Jack spent about three minutes trying to figure them out, he had such a blast playing with them.  I got home, looked at their website, and saw that they were made in America, and were made of safe materials.  Cool stuff!

Then, I fell in love again on Saturday night with The Americans.  My aunt Linda recommended this show to me, and it is freaking fantastic!  We don’t get FX as part of free channels, so I’m watching it on Hulu.  They only have three episodes so far, and I’m freaking OBSESSED.  They better not cancel this show.  They always cancel things I love.  Jerkfaces.

This week, there is no meal plan.  I’m working late Monday and Tuesday, and Jack is having his surgery Wednesday morning.  My sainted sister and her husband took Jack last night so that I could get my ducks in a row ahead of the big day.  I made a few dinners, made and froze two chicken pot pies, and generally got the place in order. 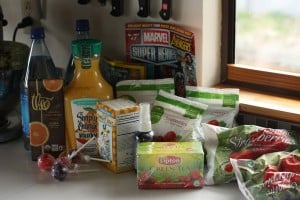 Bring on the sore throat!  The chocolate is for me.  I figured I’ll need it is Jack is as dramatic as Troy is when he is not feeling well.  I might end up drinking some vanilla extract or something if this goes to shit.

Later today, I’m hitting up Costco to see if they still carry coconut water, which I’ve heard is like nature’s Gatorade.

When we bought Jack’s big boy bed, we wanted something that would grow with him, and also give us room to sleep in there with him on occasion.  As a reward for good behavior, about once a month, Jack and I have a “sleep party” in his room.  He loves it, and I love it because he ends up sleeping an hour later than his normal wake up time.

Anyhoo, his new big boy bed is a daybed, so there is a place for me without having to sleep directly on the floor.  Part of the purchase was keeping the surgery recovery in mind, as I’m guessing I’ll probably hang out a bit when he is sleeping it off.

Another thing that I recently got to help (me) with his recovery?  A Kindle Fire.  I know, I can’t believe it either!  I had some birthday and Christmas money, as well as saving up the spending money that Troy and I get twice a month.  I received a free hand me down Kindle from a friend for my birthday, but I found after awhile that I wanted something with web capability and educational games.  I’m hoping that Jack will enjoy the games, and I’ll probably be doing some reading over the next few days!  Our library system makes it so easy to download ebooks for free.  Love.that.so.much.

What are you all enjoying this week?

originally posted on February 24, 2013; Updated on October 16, 2018
16 Comments//Leave a Comment »
Categories: Meal Plan
« Previous PostAnd So It Begins…
Next Post » May This Be the Last Time