I’m about to say something that makes me sound like a huge jerk.

I love my baby.

For the last week or so, I haven’t really liked him.

I get that it comes across as ungrateful.  I’m so lucky and thankful to be blessed with this little guy, but man, reflux is a real bitch.  To anyone who hasn’t had a refluxy baby, they’re probably horrified by what I said.  Anyone who has had a kid with reflux would probably be shocked it took me four weeks to admit it.

Watching someone you love in pain sucks so hard, but your emotions and empathy get almost dulled after four hours of being screamed at.  It’s exhausting, and it’s really really hard.  I think we’re in weird reaction mode right now reliving Jack as a baby, and that is probably overshadowing a lot of things.  I guess I assumed God would give us a break on this one given what we went through with J Bone.

Once again, God laughs at my assumptions and silliness.

We were able to get new meds on Wednesday, and they seem to be stronger and more effective, but we need to give them a full two weeks before we can be sure of the results.  Insurance companies require you to start with the crappy cheap meds and then “fail” at those before paying for the big guns.  I’d like the insurance companies to hold a screaming baby for a few weeks waiting for the shitty meds to take effect. We got the big gun medication now, and I’m reading to come out shooting.  The pharmacist said “this has a $35 co-pay (we have amazing insurance through Troy and $35 means the drug is crazy expensive for the insurance company), is that ok”?  I told her I would pay hundreds to get him to stop freaking crying.

We started the new meds Wednesday night, and on Thursday, Bennett pretty much slept the entire day.  Troy and I kept joking that they must have given us Ambien instead of Prilosec.  After a month of being Bennett’s nap mat, I decided Friday was the day I would declare this boy was napping in his crib.  We ended up with a 30 minute crib nap, and a crazy cranky child for the rest of the day.  Yesterday was better, and a friend meeting him for the first time asked “is he always this good”, to which Troy and I laughed and laughed and said “uh, no”.

Jack on the wall: 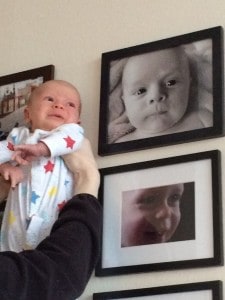 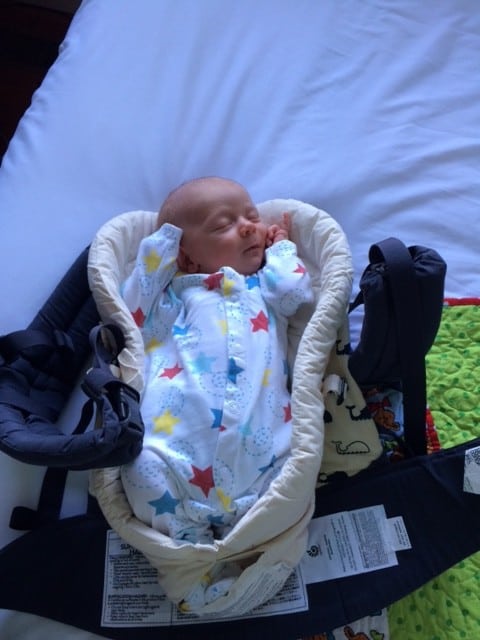 We did all the right things with Jack and sleep patterns and laying the groundwork for good sleep, and he was still a crappy sleeper until after his first birthday.  Part of me thinks we should be getting Bennett on a better schedule, but so far we’re rocking four weeks of him primarily sleeping on me.  The first few weeks it was just cute and nice to have a snuggly baby, but as the reflux increased, it became necessary to keep him at an angle after eating.  I wear him a ton during the day, and nights find me in the bed in his room, sleeping at a 20 degree angle, with him on me all night.  I’m sure we’re setting him up for a horrible adjustment to normal sleep, but the gagging and choking on his own spit scares me too much to put him down.  I don’t know too many grown ups who have to still sleep on their parents, so I’m sure we have some time to figure this out, right?  But the fact of the matter is, I have gardening and yard work to do, so homeboy better get on board with solo naps soon.

In amazing “thank you Jesus” news, this week Jack earned his Self Manager badge at school.  To earn it, they have to make good choices and be nominated by their teacher.  Then they have to get all their other teachers (PE, music, library) to sign off on it, classroom volunteers, lunch staff, and recess teachers, and then recite the pillars of character to earn it.  Once they earn it, they’re allowed to walk to lunch, recess, PE, music, and library without their teacher.  I need to pause here, and get down on my knees and kiss the ground his teacher walks on.  That woman has changed our lives, and allowed Jack to see himself in a positive light at school.  Last year we were just trying figure out how to keep Jack out of jail in a few years, because it seemed like that was the road he was headed towards.  Twelve months later, and his behavior has earned him a huge epic reward at school.  God bless amazing teachers for what you do for our children!!!

We took Jack back to the doctor on Friday because he is still have tummy aches, and diarrhea in the evenings.  Basically they didn’t have any solutions, but gave us some suggestions to try.  Jack had an ear infection a few weeks ago, and the ped thought maybe the antibiotics had impacted his gut flora again.  Duh, why we never thought of that is beyond me.  He takes a daily probiotic, but we need to remember to bring out the super powerful probiotics when he is sick and taking meds.  We’re back to a low FodMap diet, and limited to almost no dairy.  We’ll figure it out eventually, and until we do, we’re just thankful he isn’t in the same level of pain that he was in November and December.

Another fantastic development this week happened on Thursday.  Four weeks to the day Bennett was born, I realized I hadn’t taken a single Tylenol for nip pain, and hadn’t grimaced in 24 hours when he latched on to feed.  It’s such a relief to not constantly be in pain 14 times a day.  It took nine weeks to get to that point with Jack, and I’m so glad it was a shorter torture this time.

And speaking of eating so much, I knew B Dubs had been chowing down a lot, so when we had Jack at the doc on Friday, we asked to have Bennett weighed on their infant scale.  Bennett was 7 pounds 12 oz at birth, and lost 6 oz in two days (normal).  My milk came in after only 18 hours thanks to his power latch/jaws, and he gained all his weight back fairly quickly.  At his second check up, he had only gained 1 oz in a week.  Here is why I love our ped’s office.   The practice has probably 10 doctors/ARNPs, and they’re all wonderful.  The one we saw that week told me she wasn’t worried about the low gain because he had just gained a ton.  Simply recommended we come back in a week for a weight check, and if the gain was low again, we’d talk about it then.  I know so many friends who have been put on daily weigh ins by their docs, which is insanely stressful and makes you feel like a pretty shitty parent inadvertently.  We went back the next week, and chub chubs had gained 9.5 oz in a week.  Booyah!  This last appointment was nine days after that one, and Jabba the Chubs packed on a whopping 1 pound and 6 oz.  I knew he was gaining, but I didn’t realize it was that much.  The nurse and I practically high-fived, and I thanked my boobs for working so hard.  Good job boobs.

Meal plan time! Troy goes back to work this week, so that should be interesting. I’ve been getting up between 5 and 5:45 am, and it’s mostly worked out really well in letting me get ready for the day before the rest of the peeps in the house wake up.  Bennett hasn’t cooperated all mornings, but I can get showered, ready, dressed, and sometimes even eat by 6:30 ish.  To me that is huge in starting my day off on the right foot.

Thursday:: Beef and broccoli stir fry, sweet potato fritters, and stir fried snap peas.  No, the fritters don’t really “go” with the menu, but I want to make them for a recipe for the blog, so it’s happening!

I haven’t really grocery shopped for the week; I plan to do that tomorrow.