Ok, in the interest of not jinxing things, you did NOT read this next sentence.

I’m not sure what exactly is the cause of the disappearance.  A few things happened on Tuesday, so I can’t pinpoint the exact cause.  Maybe it was a combination of things?

1) It rained.  It hasn’t rained in a really long time (they’re calling for a drought this summer.  In Seattle), so maybe the rats thought it best to stay in their nasty little hovels?

2) No new poison was put out, but maybe they finally consumed enough of it?

3) I started turning on the heat lamp at night because it was getting chilly.  Personally, if I were a rat, I’d want to be in the coop with the warm heat lamp, but perhaps the red light is freaking them out?

4) I kinda beat the shit out of one of them and broke my rake in the process.  I’m thinking this might be the top reason they’re staying away, but who knows.

Tuesday night, we were late getting home, so I went out after Jack was asleep the bring the food in the house.  There was only one in there, and Troy had done such a great job with sealing all the holes, that the rat couldn’t figure out how to get out of the coop.  I decided to take a stand right then and there.  I would not let this piece of crap just cower in the corner; I was going to force him to disclose his secret entrance. I was Jack Bauer, and this rat was the terrorist trying to shoot President Palmer…on the day of the California Primary.  Or, I was the cougar, and that rat was Kim Bauer.  Either way, it was going to tell it’s secrets.

From the outside of the coop, I assaulted him with a rake.  When he’d run in a corner, I’d run over there and slam the rake as hard as I could in to the hardware cloth.  Then he’d run somewhere else, and I’d run to that side of the coop and basically just beat the rake until he finally showed me how he was getting in (and holy crap it was in a really hard to believe spot up in the rafters above the front door).

Then, he was on the outside of the coop, but I wouldn’t give in.  I started slamming my rake pole, (because at this point the rake head had broken off) all around him trying to hit him without trying to hit him, because I thought if I actually made contact with his fat and creepy body, I was likely to hurl.

He finally climbed down the side of the coop (being chased by the rake all the way down) and ran off with me throwing rocks yelling “tell your friends fucker”.

And I think he did.

Want to know how to train a tiny ninja?  Troy’s Ninja School is taking new applicants for the next quarter!

Last Sunday, my sister was feeling sick, so being the nice sister that I am, I picked up my nephew for Sunday dinner.  I figured it would give my sis some time to get stuff done, or just relax and recover.  It was a beautiful day last Sunday, and Jack and my nephew wanted to play outside at my parent’s house.  I dug through my nephew’s bag, and couldn’t find a single coat, fleece, or sweatshirt.
I ended up sending this photo to my sister with the caption “way to not send a coat for kid your asshole.  He is wearing all the shirts in his backpack, and mom’s scarf”.  Poor Parker.  At least he is cute, but I’m not sure if he is cute enough to pull off lavender.  And for the record, I was informed it was my brother-in-law who didn’t pack the coat. 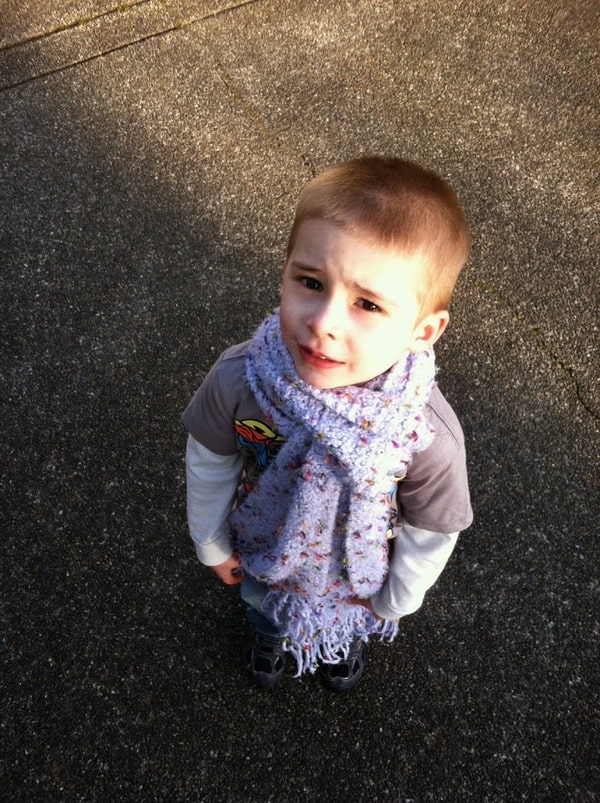 I broke my sugar fast on Monday, and purchased a decaff vanilla latte that morning.  I instantly started feeling sick, and at one point, almost passed out in the hallway talking to a coworker.  That night, our neighbors came over and brought a Jell-o No Bake Cheesecake for dessert.  I asked for a really small piece, took three bites, and almost hurled.  I declared myself officially off of sugar for the rest of my life.

I felt dizzy and sick for the next day as well, despite staying far away from sugar.  Wednesday morning I woke up feeling WEIRD.  I went in to work, and as I got off the elevator for my floor, my boss walked by, took one look at me and said “you need to go home”.  I said I felt like I could rally, but was it weird that my skin felt like it doesn’t belong on my body?  I was promptly sent home, and told no one wanted to see my face until Friday at the earliest, Monday would be preferred.

My fabulous aunt and uncle kept Jack overnight so that I could rest, and they dropped him off at my in-laws the next day (my in-laws have Jack every Thursday).  I spent the time alone, slugging it up on the couch, making an admirable dent in my Hulu queue, and also getting about 9 episodes in to “Orange is the New Black” on Netflix.  And I did a few loads of laundry.  And thanks to the great folks at Target and their wonderful generic Unisom, I passed out around 10 pm on Wednesday, and didn’t wake up again until 8 am Thursday.  The drool puddle on my pillow was epic.

I still feel kinda off, but am much better than I was on Wednesday and Thursday.  My joints and muscles are achy, the back of my head feels like someone hit it with a metal pipe, and my skin feels like something Buffalo Bill from Silence of the Lambs would wear, but hey, you win some, you lose some, right?  I never had a fever, my appetite was fine, and I had the tiniest little cough you could imagine.  I’m thinking rickets or scurvy.

Tuesday:: I have to work late, so we’re just having breakfast dinner – pancakes and bacon that I made this morning and then froze, and then some scrambled eggs.

Thursday:: My in-laws feed us!

Friday:: We’re deviating this week and having dinner at our neighbor’s.

Sunday:: Dinner at my parent’s.  My dad makes the main dish, and the rest of us bring sides, and dessert.

This week I spent $26 at the grocery store, $3.50 at the farm for raw milk, and I have no freaking idea at Costco, because we’re headed there this afternoon before my parent’s.

I’m not a huge football fan, but since we are from Seattle, I’m going to say “Go Hawks” and call it a day.

How about you?  What are you having for dinner this week?  Are you watching the Super Bowl?  What kinds of munchies are you making?
originally posted on February 2, 2014; Updated on June 10, 2018
8 Comments//Leave a Comment »
Categories: Meal Plan
« Previous PostMeal plan for January 27th – February 2nd
Next Post » It’s on like Donkey Kong – the garden plan for 2014