Oy vey it has been a week!  Full of stress, tons of work, and joyous news.  And since I hate to dwell on the negative, let’s start with the joyous news!

Joyous
Jack has his pediatric gastro follow-up on Friday afternoon.  When Dr. P walked in to the room, Jack was leaping from giant square tile on the floor to giant square tile.  Dr. P smiled and said “this is not the same child I saw a month ago”, and indeed he isn’t.  He did an exam on Jack and his tummy looks and sounds great (last time he sounded like a hollow watermelon because his entire tummy cavity was full of gas). He hasn’t had a tummy “attack” or “episode” since December 23rd, and has been on a special diet, loads of probiotics, and a daily dose of Miralax to keep things moving.

Dr. P said we should reintroduce all the foods he hadn’t been eating and proceed like life is normal.  We need to monitor his trips to the bathroom, monitor his stomach pains, and make sure that he continues to get better.

Hilariously, we have not removed the puke bowl from beside his bed.  At this point, it’s a talisman to ward off evil spirits, sickness, and intussussception.  It’s staying there until he goes to college.

Jack as you can imagine was thrilled to hear he could return to eating normal food, and drinking his beloved plain sparkling water.

We of course went out to celebrate, and he was one happy boy with his small strawberry milkshake.

I’m cautiously optimistic that he will continue to improve, but part of me is always waiting to dive for the puke bowl, or the anti-spasmodic meds we had to dissolve under his tongue to control the cramping of his intestines.

We’ll do a lactose intolerance test in a few months to see if that shows anything.  The immunologist recommended it, but said to wait for a time because of all the meds Jack had to take to clean out his gut after the hospitalization.  Apparently the level of gut destruction we had to do can give off false positives to a lactose test.

Full of stress/work
Work is insanity right now.  As you may remember, I’ve been working on a huge 18 month project that culminates on my due date.  Right before Thanksgiving, we submitted an almost 400 page report that two other people and myself have been editing since May.  The week of the 25th, people will fly in from all over the country to verify that we aren’t a bunch of lying liars in our report.  I keep the vast majority of the data for our department, and the visitors leave at noon on my due date.  It’s been a wee bit of a cluster eff the last few weeks.

I’ve also been getting in to work super early and staying as late as our daycare/basketball schedule will allow.  We finally hired my replacement, so on top of getting everything ready for the week of the 25th, I’m also training someone to do everything I have been doing for the last six years.  The hard part is my job description has evolved so much since I first started.  I’m wiped at the end of each day, but I still can’t sleep.  I finally broke my rule of not taking any meds while pregnant, and tried a Unisom after clearing it with my midwife.  It didn’t work.  I still woke up at least once an hour.

A few months ago, I was waiting in my midwife’s office for her to finish up with another patient.  The woman came out of the room and I almost gasped.  She looked like someone who likely did not have a large build in normal life, but her entire body was just so pregnant.  I swear there were multiple kids in there, and her belly looked like a torpedo.  Her face and entire mannerisms just screamed “I’m so farking done with all of this”.  When I was meeting with my midwife a few minutes later, I said “man, I feel so badly for that woman who just left.  She looked exhausted and so over being pregnant”.  My midwife said “when I first started with this profession, I used to feel bad for women at the end of the pregnancy, but I finally realized that at some point you have to be so done with being pregnant, because that is the only way you can accept what is about to happen”.  True.

I am not yet physically done, but I’ll tell you, I am emotionally done.  So pleased, so thankful, and so happy to be pregnant.  That’s not the problem.  It’s just all the extra bullshit and outside things that make me want say “enough”.  There is an end in sight for work, but I spend half my time stressing that I won’t be there for the giant report verification.  I really want to hang on long enough to help out.

I’ve been working slowly on Bennett’s quilt.  This was night one of finally starting to pin things on the batting: 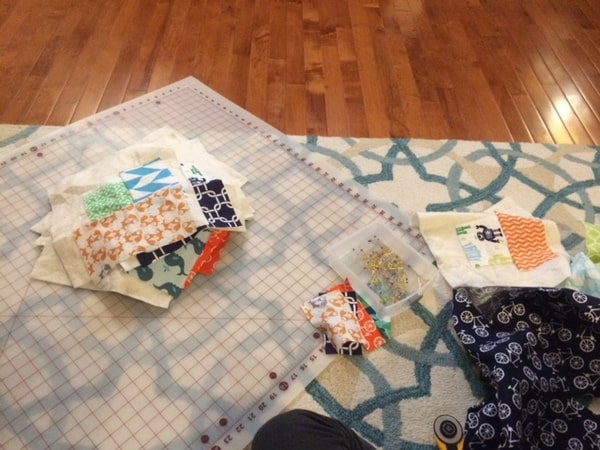 I’m now sewing the fabric on to the batting, and am finishing about 2-6 squares a night.

We have been hammering away at things at home getting ready for Bennett’s arrival.  We did a final push (ha ha) yesterday, and I think we’re there.  Troy hung the curtains and video monitor in his room, and set up the bassinet in our room.  He also installed the car seat in my vehicle, and we packed our bag for the big event.  I have to laugh at the difference between packing for Jack, and packing for this birth.  With Jack, the entire back of my station wagon was FULL.  I remember we even packed a deck of cards…like we were going to be playing gin rummy between contractions or something.  Oh man, what were we thinking?  This time, we have a diaper bag ready to go, the camera, and we’re sharing small backpack.

You may remember me saying over a month ago that my iron levels were very low and if I didn’t get them up, I couldn’t deliver at the birthing center.  I started taking a liquid iron supplement and drinking an iron rich tea.  We tested again about three weeks ago, and my freaking levels DROPPED.  Everyone joked that perhaps all the extra iron I was taking was just going to build this kid’s calves.

You’ve heard me mention over and over how much I love my midwife and the experience this go around.  OB experience: 4-6 minute appointments where I peed in a cup, she measured my uterus, and constantly told me that if I went two days past my due date she would schedule an induction even if nothing was medically wrong besides being 48 hours late.  Midwife experience: each and every appointment is scheduled for an hour.  We spend time getting to know each other (I’m pretty sure my OB didn’t even know Troy’s name), I ask loads of questions, and she gives me thoughtful answers and loads of education.  I remember my iron levels being low with Jack, but I couldn’t say how low because I never even talked with my OB about things like that.  She told me to take an iron pill and sent me on my way.

The birthing center where I am delivering is very strict about the requirements for giving birth there.  They only accept moms from 37-42 weeks (I’m now officially 37 weeks and 4 days!), and they require a certain iron level.  I joked with my midwife that we could just “fudge” the iron level so I could deliver there.  She was not amused in the least because apparently low levels are too much of a risk. I know, the nerve!  🙂

This time, my midwife has explained to me the importance of increasing my iron, and we have spent probably an hour total over a few appointments coming up with a game plan to increase those numbers.  Well, I tested again at 36 weeks, and got the good news this past Monday that my levels had increased dramatically.  Who-hoo!!!  For anyone curious, I am still taking a liquid iron supplement (Floradix, which is so fun to say), I’m taking a daily dose of Clorophyll, I’m drinking copious amounts of an iron rich tea (it’s actually delicious thankfully), I’m eating three servings of brussels sprouts and beets a day (the day after I started that, you could have knocked me over with a feather when I peed pink), and I’ve been gluten-free for the last two-and-a-half weeks.  She explained that some times gluten can inhibit excess iron absorption.  I’ve been gluten-free before, and I know it is temporary, so it’s not really all that hard at the moment.

At my last appointment, she said that Bennett had “dropped considerably” from the last visit.  It frustrates me to not be able to compare this to when I was I was pregnant with Jack, because again my OB never took the time to really discuss any of these details with me.  I’d love to know how soon before I delivered that Jack dropped, just for comparison.  I can’t change the past, but it would be so interesting to know.

Ok, too much baby talk.  I’m tired, and we have another full day ahead of us.  Let’s talk meal plan.

Monday:: Dudes, this is the laziest dinner I may have ever served.  When Jack was on his special diet, we discovered Applegate Farms organic gluten and dairy-free chicken strips.  When there is so little he could eat, they were a nice treat for him to have from time to time.  Well, we’re totally having those, with some oven fries, and salad.

Wednesday:: Grilled chicken on spinach salad, with garlic flatbread for the boys.  Beets and sprouts for me.  Again.

Saturday::  We’ll probably go out.  Too much stuff to do in the week, and a nice break would be appreciated.