Stock up sales abounded this weekend!

Target is having a sale of things in bulk, and I saved a bundle on Troy’s hair product.  Yes, rugged Carhartts wearing Troy uses an expensive product in his hair.  American Crew Fiber is the only thing my golden prince will allow to touch his locks, and that stuff is expensive.  It’s regularly $17.99 for a small container.  Target had a two pack of them for $16.99.  I bought two, two packs which will last him for almost 2.5 years.

Speaking of hair, I’ve started using the tiniest bit (think 1/8th of a Tic Tac) of coconut oil to smooth my hair after blow drying it.  It works awesome, and it’s basically a free product since I already use it in my cooking.  I adore finding cheap replacement products using stuff I already own.

Also, I’m not sure if this is just a Washington Costco thing, but our Costco is offering “warm” LED bulbs for $4.99.  They’re $14.99 with a $10 instant rebate provided by Puget Sound Energy.  By “warm” I mean they have a similar light as an incandencent.  I know some people don’t like CFL bulbs because the light is weird.  These bulbs look totally normal.

They were 60 watt, and 4 per member per visit.  They’re reported to last 22 years (assuming 3 hours a day usage) and cost $1.23 a year to operate.  I replaced 3 CFL bulbs in our livingroom with these, and the light is so much brighter, but still very warm and inviting.

I wasn’t planning on getting LEDs until our CFL bulbs had burned out (which takes forever), but my aunt and uncle got some at Costco and I saw what a difference they made in their living room.

And still speaking about hair, can I tell you about one of my new loves?  Desert Essence Green Apple and Ginger shampoo.  This stuff is awesome.  I used to use Burts Bees shampoo, but they changed the formula and I couldn’t get it to lather without using a ton of the product.  This shampoo on the other hand, lathers with just the tiniest bit, and smells amazing.  I have very fine hair (my stylist calls it Turtle Fur) and this stuff doesn’t weigh it down at all.

I will complain about one tiny thing with this product.  Taking the lid off of it (it’s a flip top lid) makes the loudest sound ever.  I get up earlier than anyone else in my house, and I swear it probably wakes up people three streets over.

Troy had a few extra days off this week, and Jack and Troy had a few “boy days” at home.  Friday, they headed to Fred Meyer to meet a random dude off of Freecycle to pick up some roofing material for our soon to be started chicken coop (it’s happening, it’s REALLY happening this year!).  While they were there, they hung out in the toy section for almost an hour, just having fun.

Jack had a little fun, but Troy had a lot of fun.  He sent me some photos while I was at work. 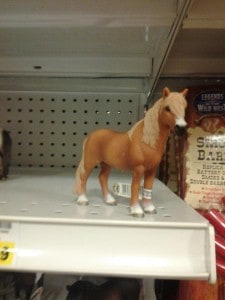 2) “Brown Chicken, Brown Cow” (if you say it fast, it sounds like “bow chicka bow wow”) 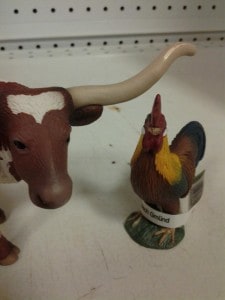 Jack had his first swim lesson on Thursday, and it was, um, interesting.  He didn’t cry, but he wouldn’t even try to do what the rest of the class was doing.  I hope he’ll  improve as we go more often.  Also, I think he’ll do better once Troy isn’t in the pool with him.  My husband is a well, a coddler.

When Jack and I went to visit my friend Anne in August, we all went swimming.  I told him if he wanted to get in the pool, he’d have to first jump off of the side in to my arms.  He cried for about 4 minutes, and then finally did it.  And then did it for the next two hours non-stop while laughing the whole time.  The next day my arms hurt in places I didn’t know arms could hurt.  It was like working out with a 36 pound medicine ball.

So, I’ll be in the pool with him on Thursday, and we’ll see how it goes…

Anyhoo, here is our meal plan for the week.  Reminder, I only plan dinners, because breakfast is always smoothies or eggs with something, and lunches are always leftovers.  We rarely eat dessert during the week, and our dinner drink of choice is water kefir soda.

Monday:: Biscuit night.  I’ll explain.  I make an all whole wheat version of Pioneer Woman’s biscuits.  And the night before, I cook up some sausage, and bacon.  The night of, I scramble eggs, and put everything on the counter along with some homemade jam, peanut butter, home canned fruit, Lazy Lady Skillet Potatoes, etc.  You get to put whatever you want on your plate and biscuit, and we call it good.

I have no idea how much I spent on groceries, but it was under $90.  I’m feeling lazy right now, and the receipts are sooooo far away (like 10 feet).  I bought:

PS, this post contains an Amazon Affiliate link.  As a reminder, I earn a tiny bit if you buy via the link, but I only link things I truly love myself.