They’re in the coop.

I want to punch them in the face with a blow torch.

I knew we were going through WAY too much feed, so I went out there one night and saw their little asshole beady eyes.  I started bringing the feed in every night, but since it is dark when I get home, and dark when I go to work, I spend a few minutes banging the side of the coop and waiting for them to all get out before I go in there to hang the food back up.

Troy and I spent a few hours yesterday working on the coop.  And by “Troy and I”, I mean I was cleaning out the compost bin of chicken poop to spread on the garden, telling Troy “great job”, while Troy and a huge roll of hardware cloth got to work.  He worked his butt off, and did a magnificient job.

And the garden is fully fertilized thank you very much!

Last night, we had the same six back in there.

So basically, I hate my life right this second.

The other night, I was laying in bed, thinking about having to go out there in the morning and scare the rats away.  Then, it started stressing me out, and I had what I’m assuming is a mild anxiety attack about it.  For some reason, my brain couldn’t get past the idea that one of them would be waiting above the door inside the coop (I am picturing it dressed like a ninja with a tiny bow staff strapped to its disgusting little back), and would jump on my head when I came in.

As you can imagine, that was a fucking great night of sleep.

Obviously, we’re going to have to do something about this, because plugging up every hole wasn’t the solution.  I can’t use poison because it would be near my chickens, and if I did traps, I’d have to deal with dead rats, and I’m not certain my gag reflex can take that.

We need a cat, but Troy is so allergic that it will kill him.  Plus, it would probably eat the chickens.

Get the rats drunk you say?  Great idea!

Have you realized that I’m quite tired?  No?  PAY ATTENTION, cause I’m a rambling crazy lady over here.

After rat-a-polooza, we all had a nice dinner of split pea soup.  Troy and I had soup, and Jack had a major meltdown over the two teensy bites I needed him to eat.  Rather than throat punching him for whining, Troy made him a quesadilla because I was just too tired to do anything about it.  Then, in a moment of brilliance, I decided that we should walk down to the little restaurant in our town to have dessert.  Because, what the hell, I’d be dealing with rats all freaking week.

Jack’s favorite waitress told him that she would make him a special dessert.  You should have seen his eyes when she brought this out. 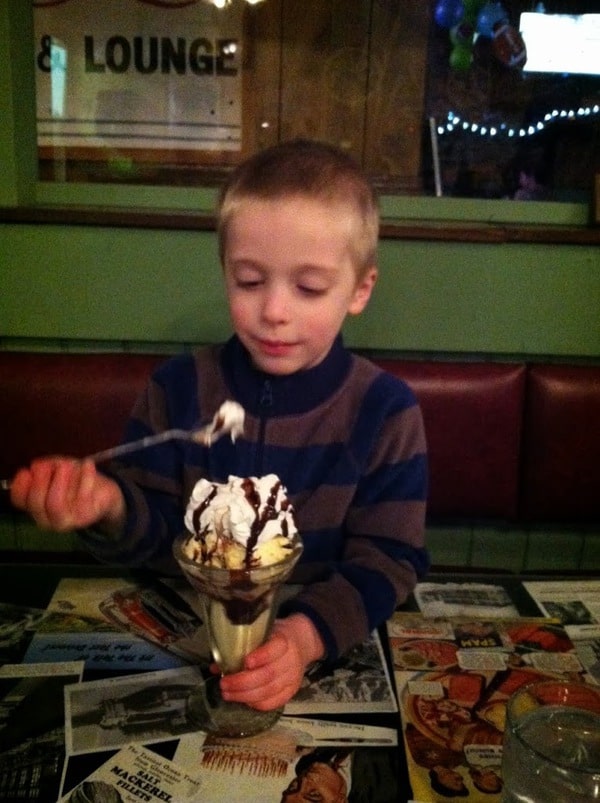 Dear lord, thank goodness he didn’t eat it all.

Because if he had, I couldn’t have eaten the rest of it.  Ice cream helps reduce rat-related stress.  It’s true.  I’m married to an EMT.  Trust.

Speaking of ice cream, starting tomorrow, I’m putting a hold on sugar for a week.  It’s a seven day sugar fast that I need to jump start a return to more moderate sweets intake.  Troy was home a lot more in December, and finally, I asked him to PLEASE stop washing our clothes on hot, because my pants were barely fitting anymore.

He then told me that he hadn’t been doing laundry, nor washing them on hot.

Ohh…ahem.  Rats (eww), I guess it was just the copious amounts of candy I was shoving in my mouth on an hourly basis.

Monday:: I am making homemade pizza with a whole wheat crust and salad.  Our neighbors are coming over, and I believe they’re bringing dessert.  That I can’t eat.  Blah.

Tuesday:: We have our Azure Standard drop site pick up, and I’m not going to lie to you.  I’m going to pick up our healthy and organic food and then go to Quiznos.  #truth

Wednesday:: Married Single Mothers dinner.  Troy’s cousin’s husband is gone for a bit, so once a week we’re having dinner together.

Thursday:: My in-laws are out of town so I have to feed myself.  Really, not ok if you ask me.  I’m probably just going to make tomato soup from what I canned from last summer’s garden, salad, and quesadillas.  We also have some salmon cakes in the freezer.  Maybe I’ll do that.  Who knows.  You?  Please tell me.

Sunday:: Another great family day!  We eat at my parent’s house; they provide the main dish, and everyone brings something to contribute.

This week I didn’t buy any raw milk (I have plenty of yogurt made), but I spent $52 at the grocery store and a whopping $115 at our local butcher’s.  I walked in to get two pounds of grassfed burger, only to see one of my bacon boyfriends carrying a huge cardboard box full of chicken boobies into the freezer.  Troy has been attempting to eat a bit more “paleo” of late, and we’re going through boobies way more quickly than before.

I yelled “hold it!  I’m buying them all”.  So, two pounds of grassfed ground beef, plus about 18 pastured chicken boobies was about $115 in all.  Not too shabby.

What are you having this week?
originally posted on January 19, 2014; Updated on October 16, 2018
19 Comments//Leave a Comment »
Categories: Meal Plan
« Previous PostMeal plan for January 13th-19th
Next Post » Confessions, January