Can we talk about Friday for a minute please?

At my work, I have to plan my days off a year at a time.  Yeah I know, ridic., but it is what it is.  So back in June, I planned to have Friday off.  My aunt and uncle hadn’t had Jack all that much lately because of a cold, and Troy keeping him home for “boy day”.  So, I asked gently if they would mind still taking him on Friday so that I could have some “me time”.

I wish I could bottle it up for you guys and share it with you.  Everyone needs what I had on Friday.

My first stop was to tour a new preschool with my mother-in-law.  She was an elementary educator for 32 years, and I thought she might want to check it out.

I had to pull her out of there because she was on the floor so involved with an activities the kiddos were doing.

Needless to say, it was a hit.  Jack will be starting in April.  I like his current preschool well enough, but I feel like he’s reached the end of what they can offer.  The new preschool is four days a week (old one is two), and he’ll be there for 2.5 hours a day.  Time to rework my budget!

It’s a Montessori school, and I was blown away with the organization of the place (more on that later), which I know is one of the tenants of Montessori.  But also, the kids were so well-behaved.  I kept checking for a small pipe that was blowing out “happy and calm” juice.  I don’t see Jack fitting in there for a few weeks, but dammit I hope they can work their magic on my little insane child.

Ok, so after preschool, I hit up Target, the mall to return some stuff at Macy’s, and snagged a $60 sweater for $8.  You like?  It’s like a wool silk blend or something fancy pants like that.

I then took my wedding ring/engagement ring combo to the jewelry store because I’ve had a feeling for a year or so that it was too tight.  Um, yes.  It was 5 3/4 and according to their little ring size thingy, I’m now a 6 1/2.  On my honor, I’ve gained maybe 2 pounds since we were married 8.5 years ago, but I’m fairly certain it’s all in my knuckles or something.

Ok, here is the best part.  I went to a really cute little bistro that makes a ton of their food with locally sourced ingredients.  I had a dilled chicken salad sandwich (holy crap, it was like heaven on bread, and my goal this weekend to to recreate it), sea salt and vinegar chips, a locally made root beer, and a (wait for it) white chocolate raspberry croissant.  I sat alone at a table, reading a book on my Kindle (second hand Kindle courtesy of my friend Elaina who upsized).  BY MYSELF.

And for as long as I wanted.  It was heaven, and I felt like weeping.

Then off to Goodwill where I picked up a lovely thread holder for $3.

It was bliss.  I want to make it a bi-yearly event.  The Day of Sarah.

Saturday, Troy was working, so Jack and I were on chilling a bit.  We mowed and weed-eated the lawn.  Well, I mowed while Jack sat on the porch playing with superheros.

We went inside, and some bug got up my ass and I had to clean out our master closet RIGHT NOW.   AS IN RIGHT THIS SECOND.  Should I have taken a photo of the before?  Yes, I should have.  Did I?  No, because I was so frenzied that I couldn’t stop, or I WOULD DIE.

Jack helped by sitting on my bed pelting me with socks.  He called it Sock Darts, and while it was pretty annoying, it also kept him occupied for two hours, which is kind of a miracle.  I wonder if he’d be willing to throw socks at me so that I could nap?

Troy and I have always shared a closet the size of a shoe box, until we moved in to my parent’s rental house.  I think we took it for granted we had space, and it turned in to a craphole.

Here is the after (shut up, yes I know I didn’t take any befores). 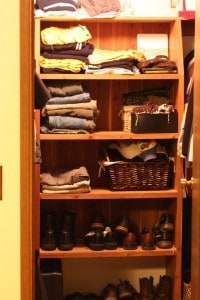 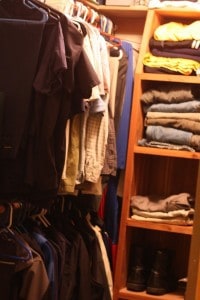 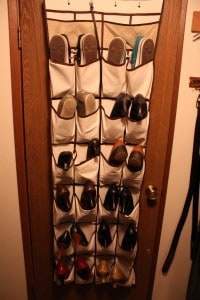 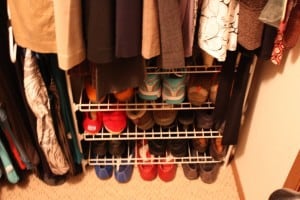 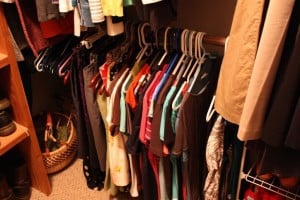 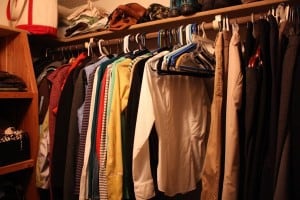 I got rid of 5 bags of stuff, and Troy has a huge pile to look through when he gets home.  And I’m putting the word out that if anyone ever buys Troy a coat, vest, or fleece again, I will end them.  He has SO many.  He has more coats than I have shoes.

Want to hear about some food now?  Thought so.  Here is our meal plan for the week.  Reminder, I only plan dinners, because breakfast is always smoothies or eggs with something, and lunches are always leftovers.  We rarely eat dessert during the week, and our dinner drink of choice is water kefir soda.

Monday:: Buffalo chicken (use this recipe, but with the dry ingredients from this one) sandwiches on pretzel rolls.  Salad, and homemade potato chips will be served as well.

Tuesday:: I finagled an invite to the in-laws for dinner.  SCORE!

Thursday:: ANOTHER dinner at the in-laws.  Double score!

I spent $43 at the grocery store, but $17 of that was vodka to replenish my homemade vanilla extract stocks.