For such an overall healthy boy, Jack sure is having a rough freaking winter.

He had a cough for a few days, and Thursday night he wanted to leave his basketball game early.  We can home, he did some more coughing, and went to bed.  Friday around 2 am, he woke up to pee and coughed some more and yelled for us that he didn’t feel well.  Knowing how over the top he can be with colds, I yelled from the bed “relax buddy, you’re fine.  It’s just a cold”.

In my defense, I get up 300 times a night to pee, and I always go in to check on him, feel his back, and kiss his head.   Because he had been coughing, I hadn’t gone in that night, and thus hadn’t noticed that my child literally was on fire.  Sigh.  Go me.

We gave him some ibuprofen, and waited a very long hour while his fever dropped a tiny bit.  We called the nurse’s line at our pediatrician’s office, and she told us to give him some Tylenol, and if his fever was not below 104 in the next 60 minutes, we needed to go to the ER.  Over the course of the hour, we temped that boy to his breaking point to monitor the fever.  Within about 45 minutes, the fever was down below 104, but at the 60 minute mark, it shot back up to 104.4.

We packed up and headed to the ER like veterans.  I threw the ipad and chargers in a bag, and the thermometer in my purse.  About 15-20 minutes in to our journey, I chucked the thermometer back at Troy and told him to take Jack’s temp one more time.  101.5.  Of course. Because at 3:45 am in the pouring rain on the freeway is exactly where I wanted to be spending our time.

We pulled over to a park and ride and called the nurse’s line again.  We were lucky enough to get the same nurse, and she remembered us (I guess a 104.7 temp is hard to forget in a few hours?).  She said “I never tell parents on the way to the ER to turn around and go home.  But turn around and go home”.  She said that there was nothing the ER could do for us with a 101.5 temp that our ped’s office couldn’t do when they opened at 8 am.

We went home, Troy and Jack climbed in to bed, and I got in the shower and went to work.  Jack and Troy headed to the ped’s office when they opened, and Jack tested negative for both of the major flu strains (A and B) that are going around.  We were told to just watch him, and keep his fever low.

My boss came in to my office around 8 am to tell me that the daughter of her daughter’s friend (got that?) had spiked a 105 fever that night, went to the ER and was diagnosed with Scarlett Fever.  Oh, and apparently, tons of kids at the ER (same place we had been headed) had Scarlett Fever.  Nurse Sandy on the nurse’s line saved us from exposing Jack (and my 39.5 week pregnant ass) to a Little House on the Prairie disease.  I’m sorry, but if it killed you while playing Oregon Trail, it’s an old ass disease.

Yesterday, Jack woke up perky and happy.  His last meds dose had been at 2:45 am, and I decided to take his temp every 30 minutes throughout the morning and hold off on any meds until the fever was going back up.  After 8 hours, he had a slight fever of 99.7 and got some meds, but that is the highest it went all day.  It seems to be some virus that was vicious and evil, but thankfully short-lived.

With Jack sick all weekend, my errand running abilities were down to nill.  Since I couldn’t do any food prep or freezer cooking, I did manage to complete a project that has been on the to-do list since before Thanksgiving.  The light-blocking curtains we hung in our dining room have always been way too long.  They pool on the floor, and look terrible.  I shortened them, and am much happier with the results! 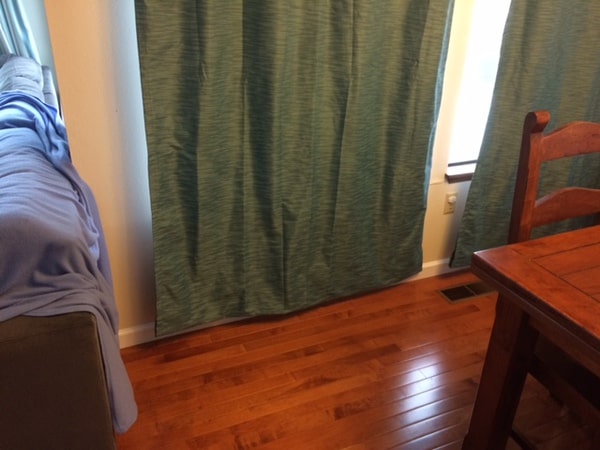 On Friday, we wrapped up all the finishing touches on the giant work project, and then cleaned the hell out of our whole department to prepare for the visitors that arrive on Monday.  It was fun to nest at work!  I was cleaning my printer because it was dusty as hell, and apparently I touched a bunch of random buttons because I got this error message: 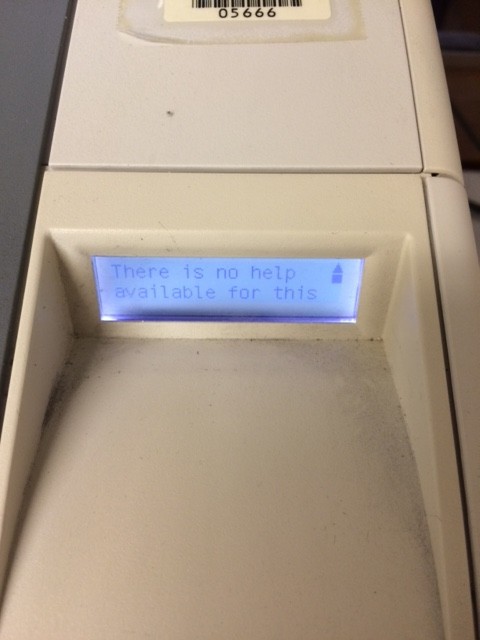 I think I did more, but frankly just typing it out makes me tired all over again and I can’t remember!

I spent last Sunday night finishing up a “car seat” blanket I had conceptualized in my head.  Being married to a very safety conscious man who also happens to be a fire fighter (he was always safety conscious, but being a fire fighter has made him more so), I know you do not mess with car seats.  Nothing should be added to them, not should they be altered in any way.  That’s why some of those little car seat sleeping bags on the market make me nervous because of how they are attached to the seat.  In my mind, a car seat blanket could totally work without messing with the structure of the seat.  I love how it turned out! 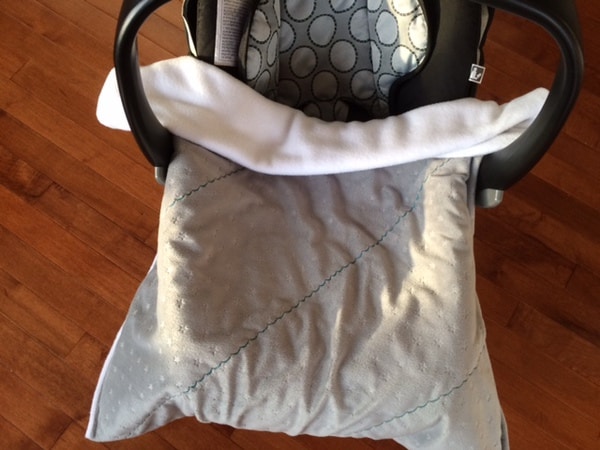 The grey fabric was kinda “blah”, so I used a pretty teal thread to make a decorative stitch across the top.  The stitch also secured the grey fabric to a thin piece of quilt batting.  Those two pieces were then attached to a piece of white fleece, and then I made a “foot pocket” and stitched up the side a few inches to create a baby-sized sleeping bag. It tucks nicely around the base and will keep Bennett warm and cozy. I want one for myself.

Random tip for the parents of Lego freaks out there.  Before dumping Lego bins out on the floor or table, put a blanket or towel down.  Even better is a quilters mat if you have one. 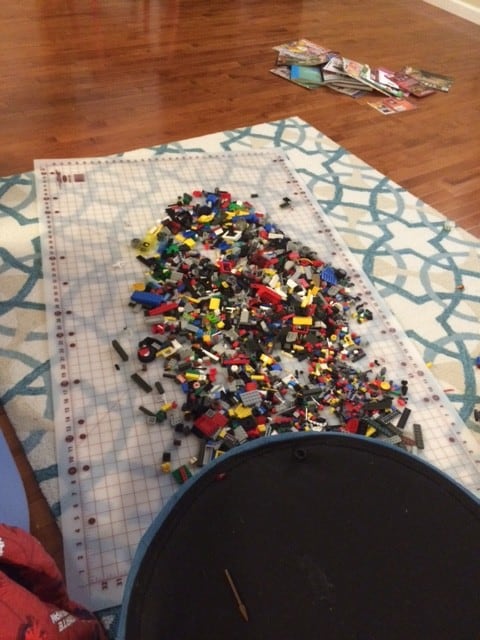 When it’s clean up time, just fold the towel/blanket/mat in half and dump the contents in to your bin.  Easy peasy, lemon squeasy!

Let’s talk meal plan!  All is tentatively planned because I might be having a baby for dinner one night.  Not like eating a baby, but you know.

Monday:: I’m working very late for our project, but the boys will have a homemade pizza from the freezer and salad.

Saturday:: If I haven’t had a kid by Saturday, we’re going out.

I’m doing all my grocery shopping later today, so I technically haven’t spend a dime yet.