Guys, I am terrified that the Seahawks are going to the Super Bowl.

The Seahawks have only been to the Super Bowl one other time.  I think it was 2006.  Maybe 2007.  We lived in Los Angeles then, and being happy to have our team in the big game, we hosted a really small party with two friends from my work.

Everyone brought some goodies, and one of my friends needed to heat hers in the oven.  She went in to my kitchen and fiddled with my oven for a few minutes, before declaring she didn’t know how to work it.  The oven was a 1940’s old school gas number that you had to light with a match after turning on the gas.

I went in to help her, not knowing that while she had been messing with the oven, she had left the gas on.  So, you know what happened next.

I lit the oven, and a huge fireball shot out at me.

It sounded like a bomb exploded in the kitchen.  The flash was huge, and the ringing of my ears was like something from a war movie.

Thankfully, I had just taken out my contacts and was wearing my  glasses, so my eyes were spared damage.  You know what wasn’t spared damage?  My hair.  Sigh.

Somewhere there is a photo of me with my arms wrapped in wet rags, and my hair half hanging in clumps from my head, and the rest of it frizzled.  I had to fly to Boston the next night on the red eye, and I kept telling everyone that my arms didn’t hurt that much, so we decided to all hop in the car and drove to a salon to get my hair cut.  Cause, you know, I couldn’t fly to Boston for work with nasty hair.  Not happening!

About halfway through the haircut, the shock wore off, and the pain set in, and it was AWFUL.  I started crying and yelling at the hair dresser to “for the love of god hurry the fuck up”.  We tipped her handsomely, don’t worry.

From there, we rushed to UCLA’s emergency room as quickly as possible.  We ran in through the doors to find NOT ONE STAFF MEMBER in the lobby.  They were all watching the Super Bowl in the next room.  In a moment of class, I yelled “does anybody fucking work here”?  A wonderful nurse came running, took one look at my arms covered in wet kitchen towels, and pointed to the pain chart.  Before she could even ask how the pain rated, I yelled “I’m a fucking 10 ok, a fucking 10”.

It almost made me not care when they shoved a tube with a little camera down my throat to make sure I hadn’t inhaled any of the gas when it was lit on fire.  It almost didn’t make me mind the huge blisters that were rapidly swelling on my hands.

It also gave me the idea to mess with the nurse.  Apparently I told her I was a hand model and had a gig booked for the next day, and would that be a problem ma’am?

I told Troy over and over that there is no way that childbirth could ever be that painful.  I remember the day after Jack was born, multiple friends who I had told that to called me to test my theory.  I informed them that even birthing a child with a 99th percentile head with zero meds and plenty o’tears (not crying, but like my bits getting messed up), it didn’t hold a freaking candle to second degree burns.

So, as you can see, the Seahawks actually advancing to the Super Bowl again brings up some traumatic memories for me.  I’m setting a rule that this year, food can only be heated via crockpot.  It’s non-negotiable.

Speaking of crockpots, both of mine got a hell of a workout yesterday.  I had those suckers going from morning until this morning.  I busted my ass making a ton of paleo meals for Troy’s upcoming meal needs, and also for the freezer.  Then, in a moment that defined irony, I spent about 10 minutes last night grinding flour in my grain mill.

Operation E-RAT-ICATON (my dad’s clever title) is on like Donkey Kong.  Troy spent more time in the coop this week and weekend, plugging every hole he could find.  He even used some spray foam, which we fully understand won’t stop them if they want to chew through it, but Troy said we would at least know where they were coming in if they busted through it.  Using a reader’s tip, we’ve also put bowls of store brand Mt. Dew around the yard, hoping they will drink it, won’t be able to burp, and well…expire.  My dad also put something he calls “one bite” in various places around the yard where we know they are hanging out at night.  The chickens can’t access said places, so I say nuke those bastards. 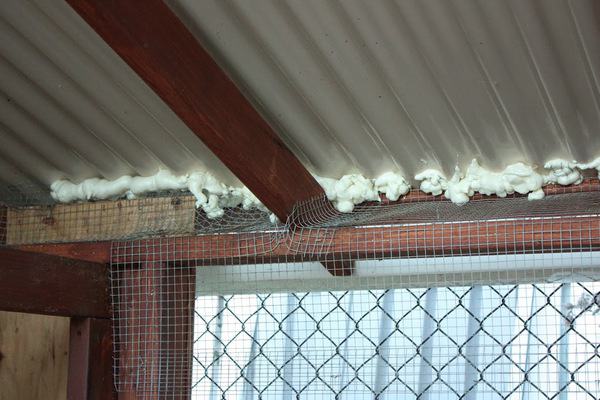 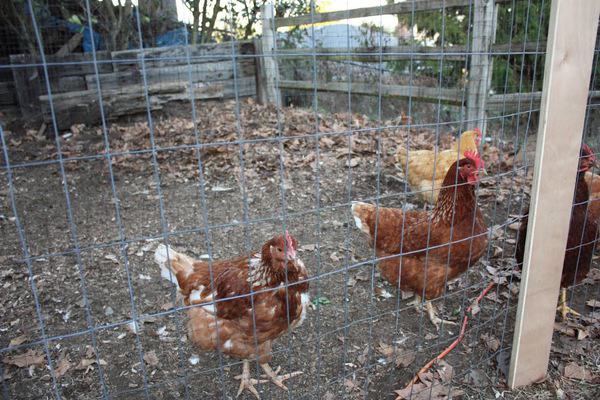 Since we discovered this little rat problem, and I made the choice to start bringing the feed in at night, we have hardly gone through ANY feed.  Now, I’m pissed that those little buggers have been costing me so much in feed.  I buy expensive feed too, and those little plague spreaders have been eating it.  I am out for blood.

This week was absolutely gorgeous; sunny, blue skies, and pretty warmish weather.  They’re already saying we’ll have a drought this summer because it pretty much only rained while my friends from Los Angeles were in town.  Jack spent some time outside today in the sunshine.  Nothing is more fun than chalk, cars, and a wheelchair ramp.  You don’t have to be a gimp to enjoy the ramp! 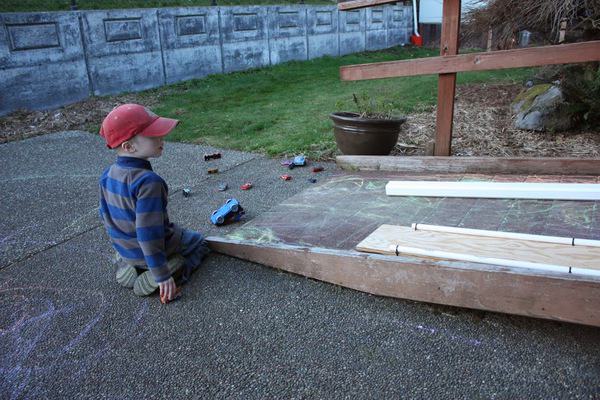 My one week sugar fast has been great.  I’ve really only missed sugar when I’m winding down at night, and in my once a week latte.  I just skipped the coffee this week because coffee without flavoring is nasty.

Monday:: This week we’re actually having the pizza and salad that we were supposed to have last week.  Jack got the sniffles, so our neighbors didn’t come over for dinner.

Thursday:: My in-laws are feeding us.  Hurray!!!

This week I spent $70 at the grocery store, $3.50 at the farm for raw milk, and $26 at our local butcher.  I needed a huge pork butt for a recipe I’m trying out, Troy wanted some burger, and we needed more breakfast sausage.  The woman who owns the butcher shop gave me the burger for free because I bought so much chicken last week.  I love small businesses!!!

What are you having this week?
originally posted on January 26, 2014; Updated on June 10, 2018
7 Comments//Leave a Comment »
Categories: Meal Plan
« Previous PostConfessions, January
Next Post » Meal plan for February 3rd-9th