Good morning!  It’s a very good morning for me.  I have cute toes.  My sister-in-law (hereon known as Amy the Great) wanted to hang out with Jack for a few hours yesterday.  I went and got a pedicure, filled my trunk with $145 worth of chicken (more on that later), and then cleaned the house from top to bottom.  Carpets, mopping, bathrooms, dusting, etc.!  I also got to vacuum out the car, which contained approximately 4,691 pieces of maple leaves.  Jack had 2 leaves in the backseat to look at, and ended up crushing them over the course of a few days.  Lovely.

Did I tell you guys that our church is broke, so I offered to make bread for communion?  I make two loaves, twice a month, and use the dutch oven bread recipe.  I’m planning to add “maker of the host” to my resume.  Can you picture me in a group job interview?

I’m sure that is accurate.

Saturday night, Jack wanted to play a game called “hide the friends”.  He has about 490 stuffed animals that he sleeps with every night.  He calls them his friends.  He wanted me to hide them around his room, and then he would find them.  He kept telling me I was hiding them “too easy mommy”, so I hid a few in a place that took him 10 minutes to discover. 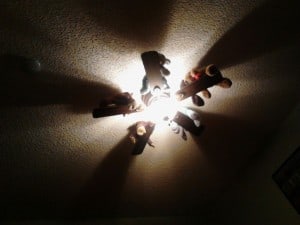 Remember how I said I spent $145 on chickens?  Check it out. 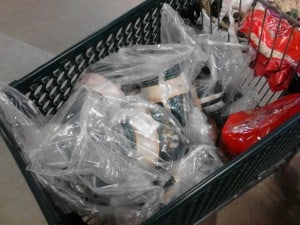 Eight were for my aunt and uncle, and two were for my sis, but I’m pretty sure there are 14 in there that are mine.

A localish market sells free-range whole chickens BOGO twice a year.  They had that sale going on this week.  It brings the price down to about $6 per chicken, which is awesome!!!  Whole chickens give you so many options for meals, and having them in my freezer feels like a bunch of little insurance policies.

Shall we discuss meals plans?  Here is our meal plan for the week.  Reminder, I only plan dinners, because breakfast is always smoothies or eggs with something, and lunches are always leftovers.  We rarely eat dessert during the week, and our dinner drink of choice is water kefir soda.

Monday:: I could lie and say that we were going to eat big salads, or tofu, or something else, but we’re not.  I’m making nachos because I really really want to.  Juanitas chips topped with a little Tillamook cheddar, homemade guac, black beans, etc.  I’ll pair it with a salad, but my heart really belongs to the nachos.

Wednesday:: This fish, salad, and fruit.

Thursday:: Troy is making his delicious burgers!  We’ll serve them with edamame, and fruit.

Sunday:: Dinner at my parent’s.