Happy Sunday!  I hope everyone had a lovely weekend.  We spent Saturday running around like crazy people, but amidst all of the craziness, we met up with one my best friends, and one of Jack’s godmothers.   We had lunch with her family, and the kids exchanged Christmas presents.  Good times.

Wednesday, I took Jack to the ear, nose, and throat doctor, and he also had the “holy smokes” reaction when he saw the size of Jack’s tonsils.  His right one is actually pushing his uvula to the side.  His recommendation confirmed my assumption that those tonsils are coming out.  Once they “get in there”, they will also check to see if his adenoids are enlarged as well.  If so, they’re coming out too.

We’re putting the surgery off until the end of February because his snoring isn’t dangerous yet.  Plus, we start swimming lessons next week (I have to get in the pool with him because he isn’t 4 yet. Having to wear a swimming suit in January is my idea of hell), and then the surgeon is on vacation for a bit.

At the appointment, I finally got a copy of his sleep study.  The findings were pretty interesting.  Apparently for pediatrics, the lowest percentage of the REM cycle that they like to see is 15% of the total sleep cycle.

Also, newest development this week, Jack has decided to also become a food blogger.  Look for it to launch soon at www.foodtastesbetterwhenyoueatalfresco.com 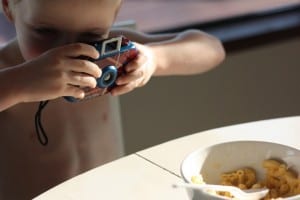 Okie dokie, here is our meal plan for the week.  Reminder, I only plan dinners, because breakfast is always smoothies or eggs with something, and lunches are always leftovers.  We rarely eat dessert during the week, and our dinner drink of choice is water kefir soda.

Monday:: A new crockpot chicken recipe thingy that I’m trying out.  That will be put over cornbread, and will be served with salad, and Brussels sprouts.

Wednesday:: TBD.  We might have a playdate scheduled.  If that falls through, it will be tomato soup (canned from the garden), quesadillas, and salad.

This week was an expensive week for groceries.  We needed a lot of fresh stuff, and I was out of a lot of pantry items like dates, peanut butter, etc.  We spent $20.77 at the grocery store, and $62.63 at Costco.  I also spent $3.50 for a half gallon of raw milk at our local farm.