Damn it all to hell, I don’t want to come back to reality.  I want to stay in vacation mode all the time…where I don’t have to go to work, Jack and I are in Denver again with my bestie, and there is so much delicious food in my face at all times.

I can’t say enough wonderful things about the Mile High City, and would live there in a hot second if we didn’t live here.  Lots of outdoor activities, great transit, tons of people dedicated to healthy living, and the food.  Oh goodness, the food.  I always spend our yearly visit just stuffing my face and smiling.  That’s what she said?  Hmmm, not quite.

This year, Anne and I became ladies of leisure, because for Jack’s birthday present, Anne bought him a week at her kiddo’s summer day camp, and she took time off of work. That means for the first time since we started visiting in 2011, we were free to roam minus the little dude.  And roam we did.  We went hiking, saw a movie (Trainwreck.  Funny, but honestly you don’t want this couple to end up together because the chick is such a dick and the dude could do way better), and went on two, five mile hikes.  My little sea level lungs totally rallied and I was proud of being able to hold my own at 8,000 square feet.

Just so that you don’t think I love everything about Denver, let’s talk about the bathroom situation, m’kay?  No bathrooms in Denver have seat covers.  So you have to build a little toilet paper nest each and every time you’re out and about.  And very few have paper towels, and ALL the doors are pull in, so you have to grab some toilet paper to open the bathroom door.  I’m allllllll about sustainability and not being wasteful, but if you’re not going to provide people in bathrooms with a paper towel, make sure your bathroom door pushed OUT.  Common decency people.  It’s a city-wide conspiracy theory.  Everyone is out to get me.

We did five miles at Falcon Mountain (Mount Falcon?) and it was gorgeous!  Some cool old buildings (partial stone castle thingy anyone?), and amazing views. 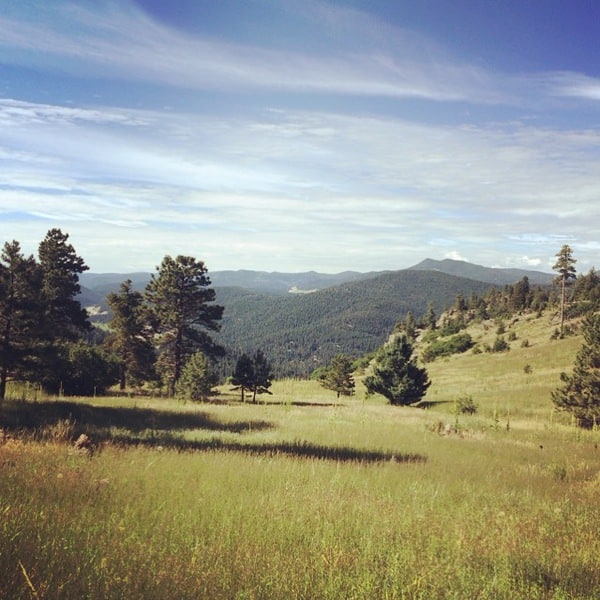 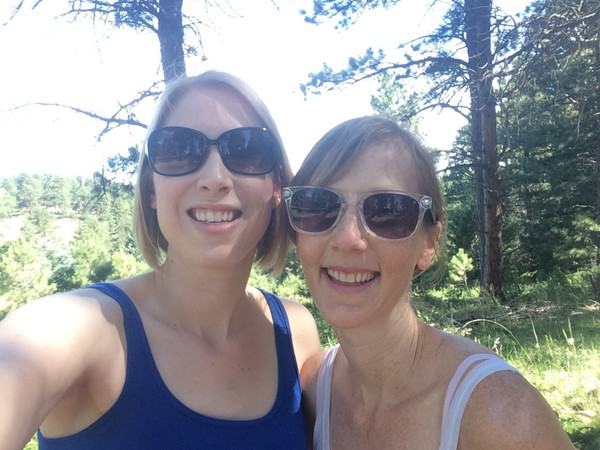 I usually feel like my build is fairly slight, and then I stand next to someone who is small boned, and then I feel like my shoulders should qualify me for the Olympic 400 meter backstroke.

I earned my ice cream with gummy bears that night.

Anne (Fitbit) and I (Jawbone) both tracked our steps that day, and even though our movement was very similar, she had 1,000 more than me. We chalked it up to my long stride means she has to take more steps than I do to equal my distance. Dainty little thing.

And then two days letter we went hiking at Red Rocks, which was MUCH steeper, but just as gorgeous! 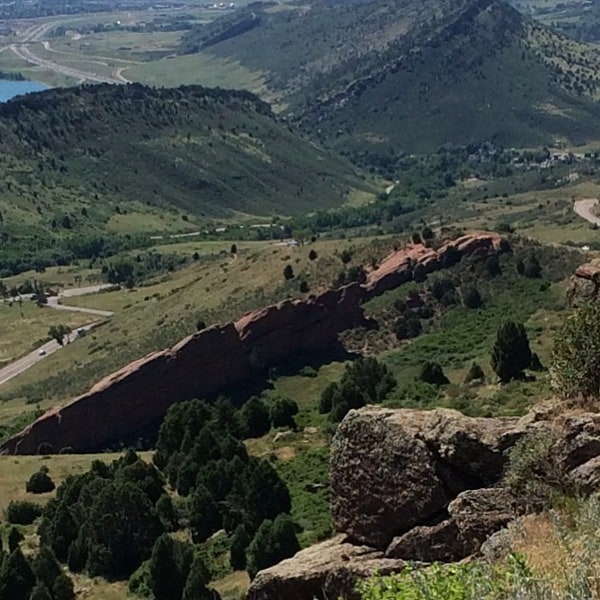 And it was fairly windy.  I’ve told you all I have very fine hair before, right?  I mean, um I got struck by lightning during one of Denver’s many thunderstorms… 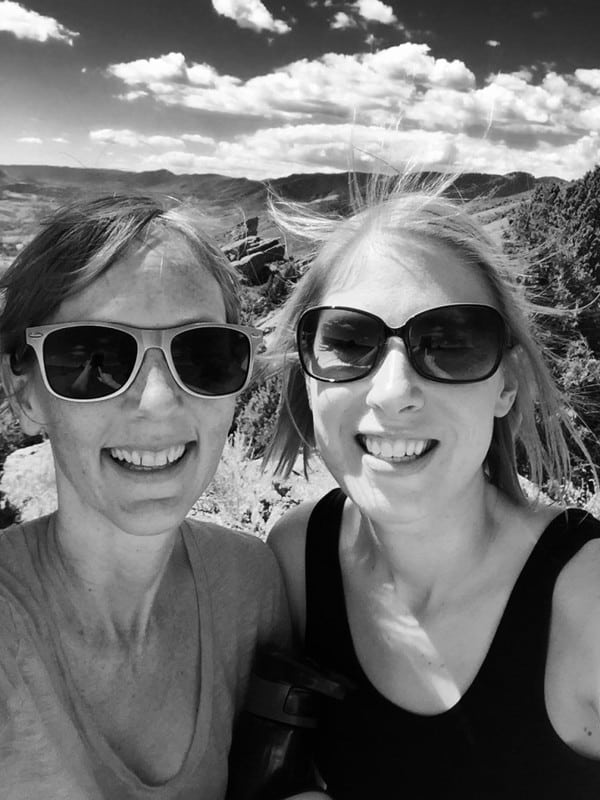 We ate at True Food Kitchen after our first hike.  Anne had this beautiful quinoa and chicken salad with tons of veggies.  And I ate an entire personal pizza.  Crushing it.

Root Down was our only dinner out this trip, and it is always my favorite stop of the trip.  Um, I mean other than Anne’s house…right.  We’ve been hitting this place up each year since I started visiting, and it’s always perfection.  I would love to open a restaurant like this in Washington.

We had lunch at Root Down’s sister, Linger, which is a restaurant in a former mortuary.  Yep, you read that correctly.  I had the street tacos, with a side of miso pickled cucumbers (because I saw them on the menu and couldn’t pass up such a chance to try them out).  Delish!

After Linger, we made ourselves sick at Little Man Ice Cream.  Anne said the rule of thumb is, if you walk by Little Man, you just get in line. Because by time it is your turn, you’ll want ice cream.  It’s an ice cream shop in the bottom of a giant foot tall steel milk can. It was delicious, and I had rocky road topped with fluffernutter ice cream.  Yeah, that happened. 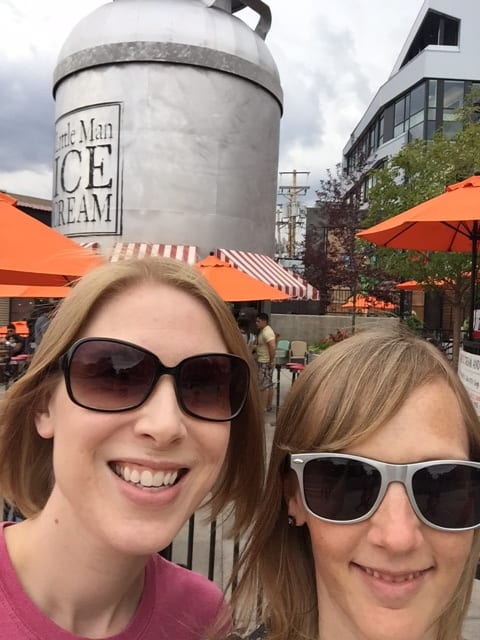 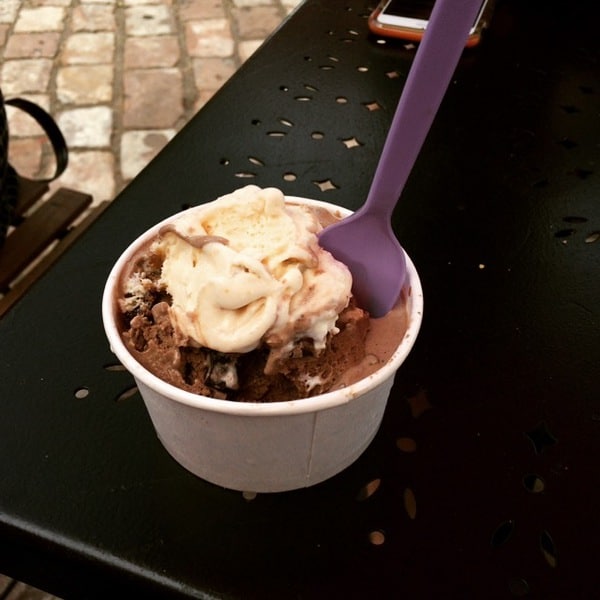 Our final lunch of the trip was at Pinche, which has been named one of the Top Ten Tacos in the US.  I had their asada and carnitas street tacos (menu).  The asada was fine (a local place I like to go has slightly better ones), but the carnitas were so tender and I LOVED the crispy parts of the pork that was in the tortilla. Their guacamole was fabulous as well.

Tattered Cover bookstore is an independent bookstore in Denver that has cozy chairs, a hip atmosphere, and the world’s best selection of “what the hell” mugs.  Seriously, everyone I know is getting a mug this year for Christmas! 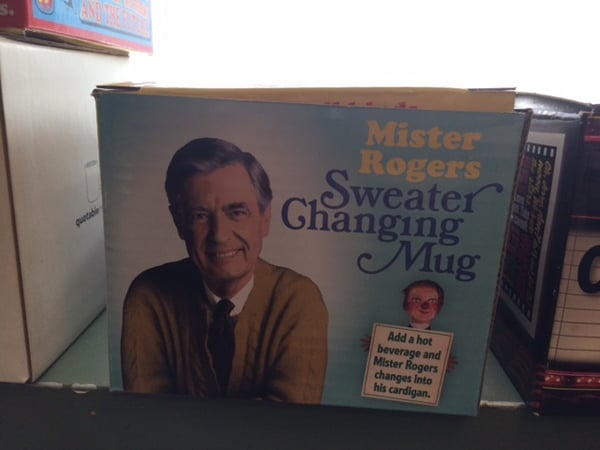 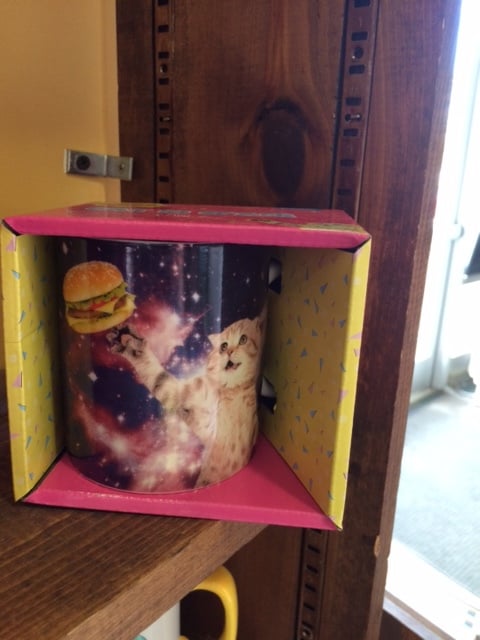 While at Anne’s, Jack and I share their guest bed.  For the first few years we visited, Jack slept in an amazing race car bed, but after a few midnight bail outs (he was too big and flopped out), he and I bunk together.  One thing to know about Jack is that he is a giant bed hog.  This is after I got up to pee one night.  Punk. 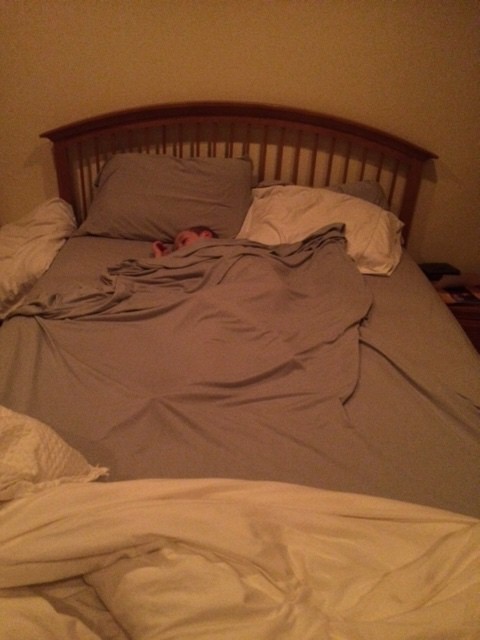 The first day we were there, we went to the Wings Over the Rockies Museum and Jack got to ride a missile. 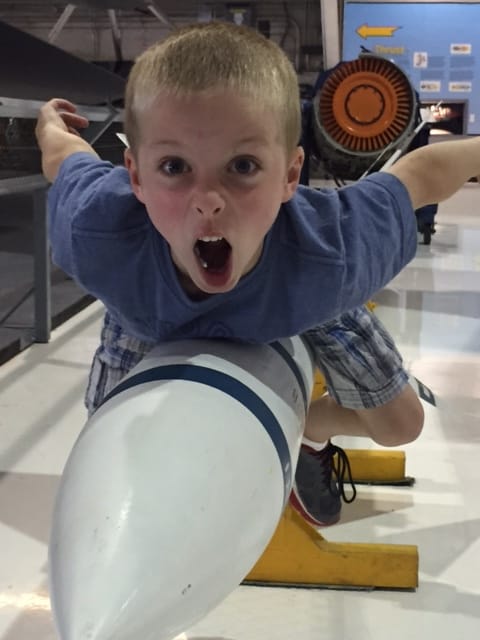 And pose with Anakin and his ship. 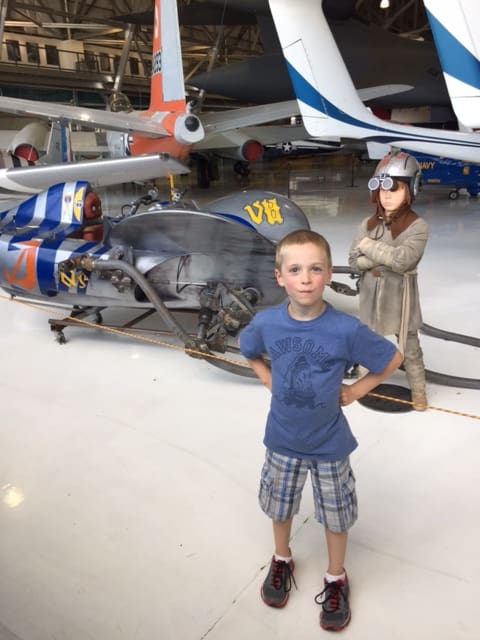 And then we went skydiving. 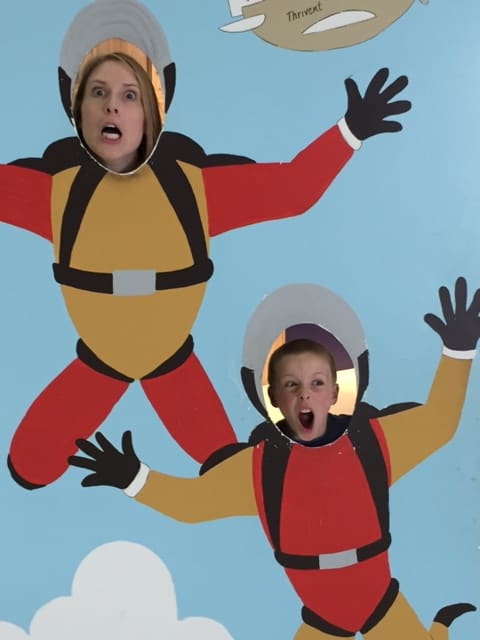 So, all in all, best trip ever.  And I want to go back right now.  Right this second.  And not go to work tomorrow.

:shakes head and gets back to reality:

Wednesday:: Chicken burgers (this was Troy’s suggestion and I have no idea what they actually entail), Troy’s new magical fries made in the toaster oven, and grilled zukes.

Saturday:: Troy is in a wedding on Sunday, and we have the rehearsal dinner Saturday night.

Sunday:: Wedding cake for dinner.  Not really, I hate wedding cake.  And about 85% of all other cakes.  They’re have a BBQ place cater the wedding which sounds both delicious and messy.