The “heat” broke yesterday, and I feel like it’s possible to breath again.  And perhaps even use my oven?  The forecast is also calling for rain on Thursday, which would be the first rainfall in over a month.  I’m sure the garden will love it, and maybe, just maybe it might be the magic ingredient in finally getting my 22 week old chickens to start laying.  Ahem.  Chickens, it’s time.

The blackberries continue to ripen around us.  While picking on Friday, I had a superhero accompany me; my blackberry picking security is top notch! 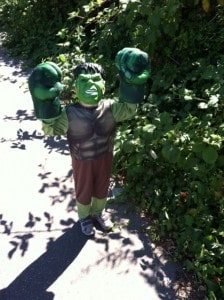 While picking, a woman two streets over told me “the blackberries aren’t ripe yet.  George told me”.  I know this George, and he is kind of the busy body of that street.   Well, I’m absolutely fine with everyone thinking that the blackberries aren’t ripe yet…it gives me an additional week or so of having the bushes to myself!  Why on earth this woman would take the word of a neighbor, without walking 12 feet over to verify for herself is beyond me.  She is passing up free fruit, but her loss in my gain.  Suckah!

Troy and I celebrated our nine year wedding anniversary yesterday.  Jack stayed with my father-in-law (MIL is at a wedding in California) last night, and Troy and I hit up a restaurant and went to see World War Z.  Nothing says “happy anniversary” like two hours of me nearly peeing my pants.  And this morning, Troy kept the traditional alive by screwing up my sleep with his snoring.

Meal plan time!  Reminder, I only plan dinners, because breakfast is always smoothies or eggs with something, and lunches are always leftovers.  We rarely eat dessert during the week, and our dinner drink of choice is water kefir soda.

Monday:: Meatless Monday! Tomato soup (using up my stock that I canned from last year’s garden) and grilled veg.

Tuesday:: Don’t tell Jack, but we’re taking him to go see Despicable Me 2 at the theater.  Our local theater has $5 tickets all day on Tuesdays, and I think it will be a fun family night.  We’ll be rocking PB&J and other homemade snacks during the show.

Thursday:: I’m winging it on Thursday.  Typically we have dinner with the in-laws on Thursday, but MIL has been traveling for the last month or so.  If we’re invited to stay on Thursday, we will.  If not?  Let’s be honest, I’ll probably head to Quiznos.

Saturday:: This is also TBD, but I’ll likely make homemade pizza if the house isn’t too hot.

Sunday:: Family dinner at my parent’s!

This week I spent about $40 at the grocery store/local produce stand/farm.  I ended up getting a gallon of raw milk because I’ve been on a yogurt crazy lately, and can’t keep enough homemade in the house.  The vast majority of my budget has gone to local (100 miles away in Yakima) produce -peaches, plums, green beans, Walla Walla sweet onions, zucchini, cherries, and corn.  I love summer!

What delicious things are you enjoying this week?